The Hyundai ix35 development team moved away from the two-box off-roader look in favor of a sleeker, more reformed profile while aiming for a roomier cabin, extra storage capacity and fuel economy leadership.

Hyundai's new "fluidic" design language finds confident expression in the sweeping, gently curved lines of the Hyundai ix35. The hexagonal grille previewed on the Hyundai ix-onic concept at the 2009 Geneva Motor Show moves into mass production on the Hyundai ix35, a defining look that will serve to unify the family of future Hyundai products. To achieve the desired dynamic and sporty image, Hyundai ix35 gets an aggressive belt line coupled with a low-to-the-ground feel which is enhanced by the optional 225/55 R18 wheels.

The interior lines echo the dynamic flow of the sheet metal. For improved comfort, the designers have carved out extra legroom and headroom (whilst lowering the overall height of the vehicle). The feeling of spaciousness in the cabin is further enhanced by the new dual-panel panoramic sunroof, benefitting front and rear passengers. The center panel can either tilt open or can open completely by sliding up and over the rear panel. 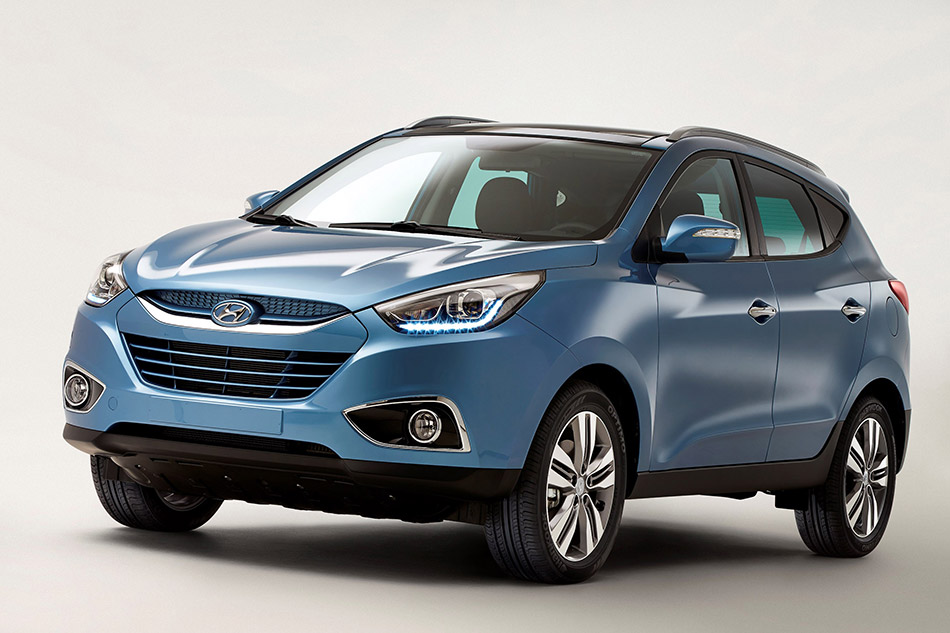 The Hyundai ix35 rides on a 2640mm wheelbase which is 10mm longer than the outgoing Hyundai Tucson. At 4410mm and 1820mm, it is also longer and wider than its predecessor (by 85mm and 20mm, respectively) greatly improving the interior cabin space but the overall height of 1660mm has been lowered by 20mm without affecting headroom.

Greater travel in the front seat adjustment gives more legroom and headroom for taller drivers. The centre console box has been enlarged to 6.2 liters for more storage. In addition, the height of the rear cargo screen has been raised for extra capacity and a small storage binnacle has been added in the rear cargo area.

To further broaden its appeal, Hyundai ix35 will get the newest fuel-efficient engines and six-speed manual and automatic transmissions. Western European customers will be offered a choice of two thrifty and clean-burning petrol engines: the Theta-II 2.0 rated at 166ps and 20.1kg.m of torque which emits just 178g/km (2WD MT) of CO2 and the Gamma 1.6 GDI delivering 140ps and 17kg.m of torque, available from November 2010, which delivers only 158g/km of CO2. This 1.6 GDI engine will be available with ISG stop-start technology, further reducing CO2 to just 149 g/km.

The European diesel lineup includes two all-new engines: the R 2.0 and the U-II 1.7, which will be available from November 2010. The R 2.0 will come in a choice of two outputs: high (184ps/40kg.m) and low (136ps/32kg.m) producing CO2 emissions of just 165g/km (2WD MT) and 158g/km (4WD MT), respectively. The U-II will have a rated output of 115ps with 26.0kg.m and will have class-leading CO2 emissions of just 149 g/km (2WD MT) when equipped with ISG. To achieve Euro-5 emission compliance, the R is fitted with a close-coupled diesel particulate filter plus highly efficient exhaust gas recirculation with by-pass valve.

Six-speed manuals are standard with both diesels while the R will come with the option of a six-speed automatic. Hyundai's all-new six-speed automatic transaxle helps the company meet its goals of improving fuel efficiency and reducing CO2 emissions. Shifts are silky-smooth with an option of sporty-type, manual shifting through the Shiftronic which is also new to the Hyundai ix35.

In addition to the new fuel-efficient engines and transmissions, the Hyundai ix35 features a number of other innovations which contribute to lower operational costs. Nestled between the speedometer and tachometer, the "ECO" coach is a new feature designed to promote fuel-saving driving habits. In the manual transmission version, an icon on the LCD trip-ometer screen begins to flash when the optimum gear shift point is reached. The automatic uses an "ECO" icon backlit by LEDs with either the red, white or green LED lighting up in accordance with driving behavior. Fuel savings in the range of 15 to 17 percent are attainable with the automatic "ECO" coach and 7 to 9 percent with the manual.

The multi-link rear suspension was adopted not only for its superior ride and handling characteristics but also because of its compact design which minimizes intrusion into the cabin creating extra space for passengers and cargo. Tried and true Macpherson struts are employed for the front suspension set-up.

Extensive work was done to isolate sounds and eliminate vibrations. Hyundai ix35 is discernibly quieter both at highway speeds and at engine idle. Booming noise is reduced thanks to a sub-frame dynamic damper while the rear luggage area gets extra soundproofing to isolate exhaust sounds. Road noise has been minimized by improving stiffness in the front and rear struts, rear trailing arm and the spring sheet.

The body shell structure is engineered to the very highest standards of safety: In crash safety tests conducted in-house Hyundai ix35 scores a five-star rating in Euro NCAP testing for both frontal and side impacts. The entire body shell has been made stiffer and lighter thanks to its more extensive use of ultra-high tensile strength steel.

In a panic braking situation, the emergency flash signals are automatically triggered thus reducing the risk of rear-end crashes. Active headrests are triggered by the pressure of the seat occupant's weight on the backrest, the headrests automatically moving upwards and forwards to help prevent injuries to head, neck and upper body.

Other new features include:

The Hyundai ix35 will be built in three factories on two continents. Mass production of the Tucson started at the Ulsan factory for the Korean domestic market in September. In November 2009, the Ulsan plant will begin production for North America and the general market (all countries outside of EU and greater Europe).