In a design masterstroke, Fisker Automotive has created a completely original vehicle: the first electric luxury/sports automobile for an active and eco-friendly lifestyle. The Fisker Surf builds on the success of the ground-breaking Karma Electric Vehicle with extended range (EVer™) by adding additional, flexible load-carrying capability, along with a spirited new attitude all its own.

Fisker Surf combines performance, luxury, style, utility, and economy with an enduring concern for the sustainable use of resources and respect for our natural environment.

As a global company Fisker Automotive will offer the Surf in all its markets around the world for the 2013 model year. The Fisker Surf will create a new niche and open new customer markets for Fisker, by appealing to those looking for this unique blend of advanced technology, innovative design and environmental sensitivity, with added versatility. Europe, in particular, has demonstrated a historic fondness for sport-wagon design, and it is there where Fisker anticipates strong demand. 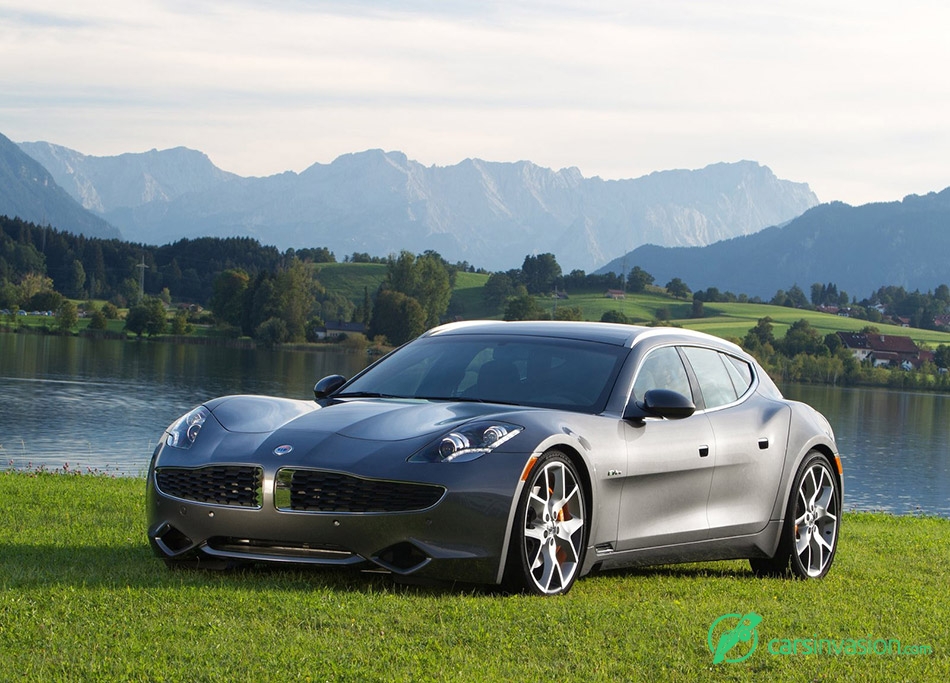 The Fisker Surf is the first vehicle of its kind and a radical departure from traditional vehicles offered by other manufacturers. It brings added energy to Fisker's focus on Uncompromised Responsible LuxuryTM and Pure Driving PassionTM.

Very early in the development of the original Karma sedan, company CEO and Executive Design Director, Henrik Fisker decided a more versatile variant would be part of the model lineup. So when the time came for the evolution from Karma to Surf the path had already been defined for combining utility with bold and striking design.

In mid-2009, with the Karma's design settled, preliminary work began on the Surf. Using the Karma as a starting point, lines and angles around the rear quarters were extended for the new roof contour, side window shapes and liftgate.

The design result is perhaps the most elegant production sport-wagon ever made.

"The Fisker Surf is a first-of-its-kind eco-friendly lifestyle vehicle that offers space, performance and luxury design for people who live an active, environmentally conscious lifestyle and like to drive beautiful cars," said Henrik Fisker.

A five door vehicle has never looked this sporty with its voluptuous sculptured rear fenders and dynamic side profile. The rear end of the Fisker Surf flows elegantly around to the side of the car with an artfully incorporated roof spoiler adding to the drama of the rear end. The liftgate itself is quite a sophisticated piece, combining utility with an aerodynamic form styled for a distinctive flair. Even the high-mounted LED brake light is seamlessly integrated into the rear hatch and nearly invisible until it illuminates.

Stunning new wheels - still of 22 inch diameter as standard -- are an evolution of the Karma's Circuit BladeTM design, and quite intricate. They make use of a two-color paint scheme separated by machined areas. The bright orange Brembo® brake calipers, exclusive to the Fisker Surf, show boldly through the wheels.

At the front of the car, designers took the opportunity to create a sporty identity for the Fisker Surf with a new three-dimensional honeycomb pattern grille.

The unique solar roof panel that is a Fisker signature has been integrated into the Fisker Surf, with a few twists. The optional solar panel not only captures sunlight to power the car, it is actually see-through, with a dark-tint translucence that adds to the sense of openness inside the car, specifically in the rear seats. Standard is a tinted-glass panoramic roof panel that tilts open at the back for added ventilation. Integrated roof rails allow for added cargo capacity and have been designed to suit the style of the car.

While the overall stance and dimensions of the Fisker Surf are unchanged from those of the Karma sedan, the new car appears longer and sleeker with its extended roofline and side glass.

The Surf is Fisker's vision of a crossover between a sport car and a station wagon and shows how Fisker is expanding its Karma platform rapidly with additional models that again create a new market niche.

A strong sense of luxury and style compliments the Fisker Surf's flexible capabilities, thanks to the beautifully integrated rework of the luggage and rear passenger areas. Once again, the Karma sedan provided an excellent foundation, with its handsomely crafted interior and thoughtful amenities. The Surf creates its own distinctive identity in the details of its beautiful, versatile cabin.

The cargo area accessed by the Fisker Surf's new liftgate is divided into three functional regions, starting with the trunk space at the rear, for large items such as golf bags and suitcases. Set off forward of that is a raised shelf designers refer to as "the podium," to handily accommodate smaller objects and give useful function to an area constrained by the presence of the electric powertrain's large invertors under the floor.

A third region of the cargo area is created by the individual folding rear seatbacks. Either or both can flip forward to accommodate additional or oversize luggage or gear.

The Surf's center console between the rear seats, under which the car's main battery is located, also incorporates an additional storage bin.

Fisker's design philosophy is evident throughout the Surf's new interior. In addition to integrating the company's signature diamond motifs, there was a clear determination to not settle for the ordinary. The divider panel between the trunk space and the podium is a richly crafted piece with cast aluminum, brushed plating and netting inspired by a high-end catamaran. Similarly, the innovative latch handles to release the rear seat backs are leather-trimmed and developed for their tactile feel. They mirror the fittings on fine designer luggage.

Passenger accommodations take advantage of the Fisker Surf's new roof contour. Headroom is increased significantly in back, thanks to both the higher roofline and the absence of headliner under the tinted glass or solar-electric roof panels. Larger side-window areas also allow improved outward visibility and add a sense of openness.

It's the perfect place to enjoy the active-sports lifestyle that the Surf both expresses and enables.

The Fisker Surf takes full advantage of the advanced, high-efficiency powertrain and the innovative space frame architecture of the Karma sedan it is based on. Mechanically, the cars are virtually identical.

As the first true electric vehicle with extended range (EVerTM), the Karma - and now the Surf - use an innovative series-hybrid drive system in which the car is powered only by electrical energy. The onboard gasoline engine drives only a generator. A pair of powerful electric traction motors drive the rear wheels, taking energy from a 20 kWh lithium-iron-phosphate battery pack carried inside the car's central tunnel. A 175kW generator supplies energy to the motors and the batteries. It is driven, only when needed, by the efficient 260 hp turbocharged and direct-fuel-injected gasoline engine.

So just like a diesel-electric locomotive, the Fisker Surf driver always enjoys the instantaneous torque and smooth response, while the internal combustion engine coupled to the electric motors provide increased energy for maximum performance and extended range.

Two driving modes, Sport and Stealth, are available to the driver at all times. In Sport mode, full power is available and the driver can command the unmatched 981 lb-ft (1,330 Nm) of torque to accelerate from 0-60 mph in just 5.9 seconds, and achieve an electronically limited top speed of 125 mph (201 kmh).

In the default Stealth mode, calibrated for efficiency, the Surf uses only battery power and accelerates from 0-60 in 7.9 seconds. Top speed is 95 mph (153 kmh). Under normal driving conditions, battery power alone will drive the Surf about 50 miles (80 km). After that the gasoline engine/generator and 9.5-gal (36 l) fuel tank provide another 250 miles of range for a total of 300 miles (483 km).

Using a standard 110-volt household supply, the Fisker Surf's battery will fully recharge in about 14 hours. The Fisker Surf can also utilize standard European 220-volt outlets, allowing this time to fall to about six hours.

The massive Brembo brakes work in conjunction with a fully blended regenerative system. During stops, energy that would otherwise be lost as heat is seamlessly recovered and fed back into the battery to help extend range and maximize efficiency. 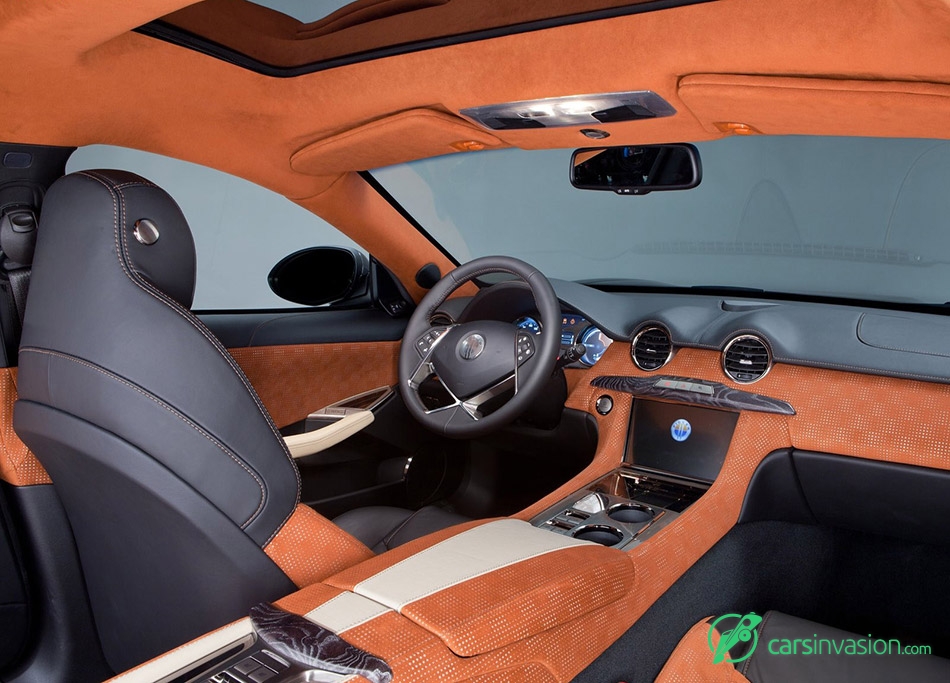 Like everything Fisker Automotive does, the Fisker Surf has been conceived and developed with a consistent focus on sustainability. That means the car runs cleanly and efficiently, of course. But beyond that, its design and manufacture look to low- environmental-impact alternatives at every opportunity.

The Low-Carbon LeatherTM used in the EcoSportTM interior trim comes from Bridge of Weir, a unique low-emissions and energy self-sufficient tannery in Scotland. EcoStandardTM and EcoChicTM interiors use entirely animal-free materials. Wood for the interior highlights is reclaimed from sunken logs and fire-damaged trees, not cut from living forests. Recycled, reusable and low-impact materials are used for seat cushions, carpet backing, trim pieces and more.

By adamantly pursuing ways to raise efficiency and reduce environmental impact, Fisker Automotive is striving to be the automaker most dedicated to sustainability.

With the stunning new Surf, Fisker has an automobile that expresses the values of an active, environmentally responsible lifestyle better than anything else on the market today.