The Infiniti G35 coupe, since its introduction in 2003, has offered sports coupe lovers a powerful, rear-wheel drive performer – one that combines a racing-inspired platform and advanced technology, all draped under a sensuous, aerodynamic body. For the 2006 model year, the G35 coupe continues to add refinements, including available Rear Active Steer; new bi-xenon headlights and revised taillights; additions to the Premium Package, including available Intelligent Key system and Bluetooth® Hands-Free Phone System, a new exterior color; and new Sport Package styling features, including unique front fascia and side sills and revised optional rear spoiler.

"For 2006, the G35 coupe revs things up a notch with available interior, exterior and mechanical refinements." 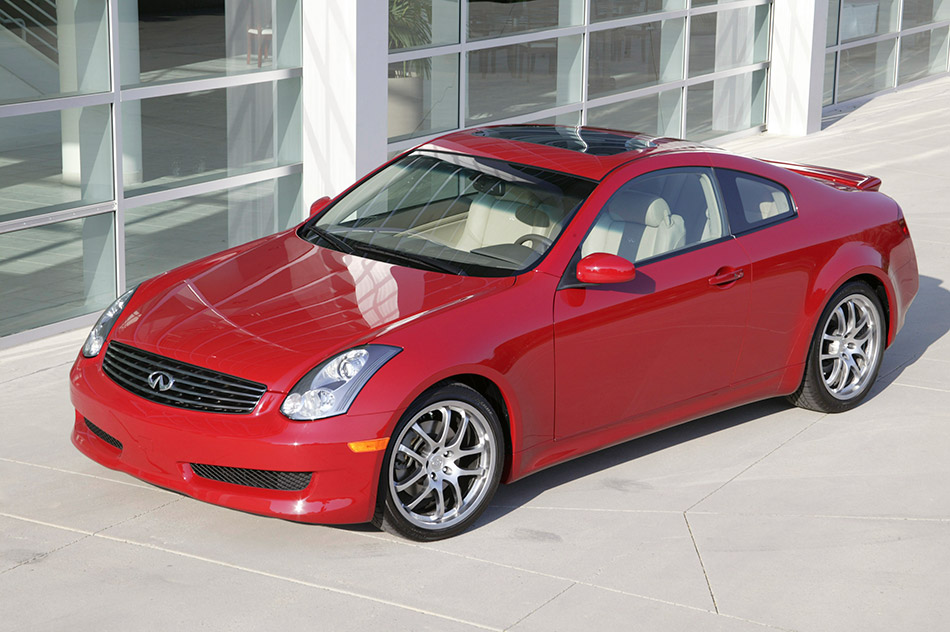 An Emphasis on Performance

The G35 coupe is aimed at the true car enthusiast. Its advanced 5-speed automatic transmission features a manual mode function with Downshift Rev Matching, which revs the engine with each downshift to provide better response for the driver. Also available is a close-ratio 6-speed manual transmission. Infiniti's Vehicle Dynamic Control (VDC) system is standard on every G35 coupe.

For 2006, the G35 coupe is again offered with a standard, advanced 4-wheel multi-link suspension design with extensive use of aluminum-alloy components to reduce unsprung weight and incorporate special "ripple control" shock absorber technology for responsive yet comfortable ride and handling.

The front suspension design minimizes alignment changes through use of two separate lower links and a long upper link. The rear design separates the shock absorbers and springs, locating the shock absorber inline with the wheel center to help reduce suspension friction and reduce the wind-up motion of the axle on acceleration.

The suspension tuning of the Sport-Tuned Suspension Package (standard on the G35 Coupe 6MT) is more aggressive than the G35 Coupe model, with stiffer spring and shocks and larger diameter stabilizer bars.

The handling and stability of the 2006 G35 coupe is further optimized by an available, new Infiniti Rear Active Steer system. Unlike passive rear steering systems, this design features motor-driven control. This system helps improve the vehicle's handling performance by adjusting the rear suspension geometry according to steering input and vehicle speed.

The system's electronic control unit calculates the desired vehicle dynamics from a series of sensors, including vehicle speed and steering angle, and directs the system actuator to change rear geometry by moving both rear suspension lower links. The result is sports car-like agility, combined with luxury stability and ride quality. The Rear Active Steer system was first introduced on the 2006 Infiniti M45 and M35 Sport models. It is available on the 2006 G35 Coupe 6MT models with Premium Package and G35 coupe models with Sport and Premium Packages.

The 2006 G35 coupe also benefits from its use of the innovative FM (for Front Mid-ship) platform, which positions the engine behind the front axle. This results in a nearly optimized front-to-rear weight balance of 54:46, which factors in weight transfer during key handling maneuvers, such as entering and exiting corners. The FM platform also positions its large diameter wheels and tires out near the corners of the vehicle, providing an extra measure of handling stability.

The G35 Coupe is equipped with standard 6-spoke, 17-inch cast aluminum wheels and P225/50VR17 tires up front with P235/50VR17 tires in the rear. Also offered are 7-spoke, 18-inch titanium-finish wheels and high-performance tires.

An Aero Package is available, with a revised rear spoiler and rear side air diffusers. Also offered on all models is a dual sliding glass sunroof with one-touch open/close operation.

The Sport Package adds a unique front fascia and side sills for 2006.

A new exterior color is available for 2006 – Liquid Platinum.

The G35 coupe's 4-passenger interior is equally attractive, combining a driver-oriented cockpit with an Infiniti level of luxury and design detail.

The use of real aluminum on the center console and dashboard areas provides an added degree of authenticity and optional Rosewood trim adds a warmer feel for those who desire it. 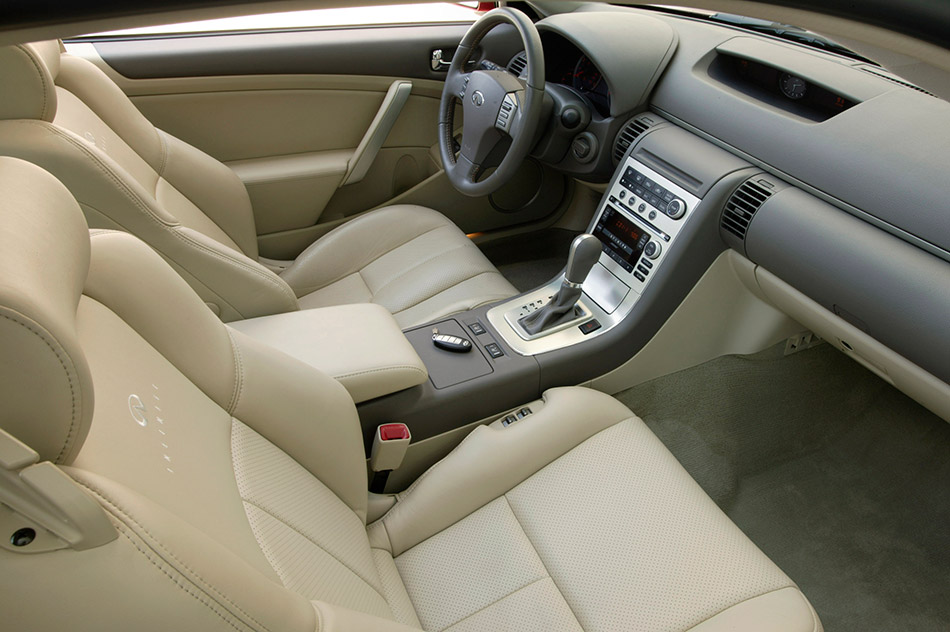 The G35 coupe's FM platform Zone Body construction is designed to help protect occupants in a collision by efficiently absorbing crash energy through use of front and rear crushable zones. In a high-speed frontal collision, for example, the crushable zone crumples while the engine is designed to move under the occupant compartment. This has the effect of expanding the crushable zone, thereby helping to reduce the deceleration g-force and simultaneously helping to minimize cabin deformation, especially in the lower leg area.

A number of optional packages are offered, including the previously detailed Rear Active Steer Package and the Sport-Tuned Suspension Package.