The FX is again available in both FX45 and FX35 designations. The all-wheel drive FX45 comes with a standard 320-horsepower* 4.5-liter DOHC V8 (based on the Infiniti Q45 powerplant) and includes new 20-inch wheels and tires, leather-appointed seats and a revised sport-tuned 4-wheel independent suspension with new dampers. The FX35 features a 280-horsepower 3.5-liter V6 and is available in all-wheel or rear-wheel drive. All FX models utilize a modified version of the advanced FM (Front Mid-ship) platform, enhanced for SUV duties.

The 2006 FX continues to serve as a showcase for Infiniti's award-winning technology and engineering leadership with the available Land Departure Warning (LDW) system, Intelligent Key and Intelligent Cruise Control with Preview Braking.

"Since its introduction, the FX has been a leader in style, performance, utility and innovation," said Mark Igo, vice president and general manager, Infiniti Division. "For 2006, with the additional standard features and exterior facelift, the FX raises the bar again in the premium crossover SUV class." 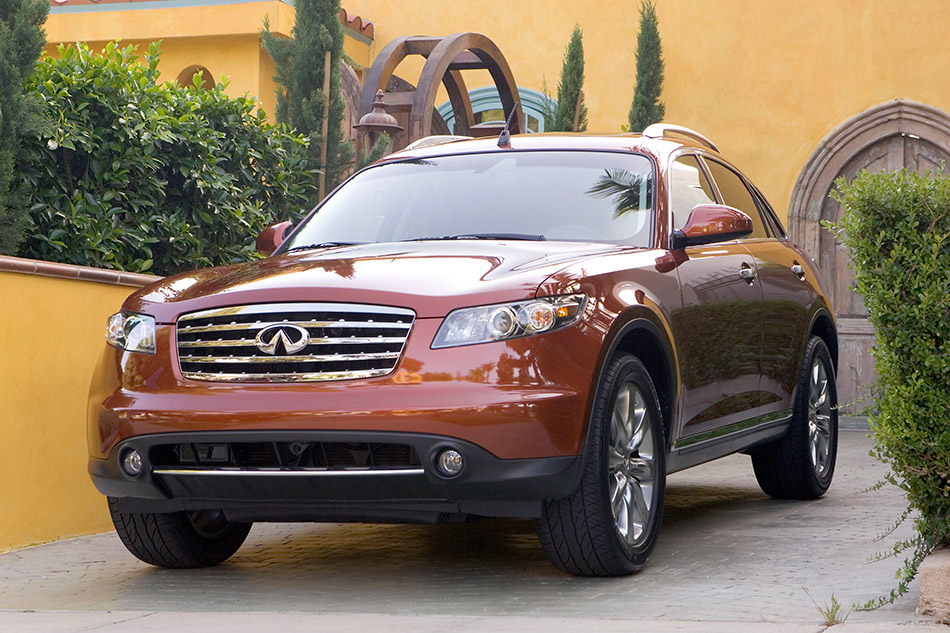 In creating the FX, its designers sought what they called a "cool fusion" – the blending of a substantial, SUV lower body with the sleek, elegant upper body more reminiscent of a classic sports car or sports GT.

A special palette of exterior colors was chosen to highlight and, at times, contrast the aggressive nature of the FX. Three new colors are available for 2006 – Liquid Platinum, Serengeti Sand and Autumn Copper.

All FX models utilize a modified version of the advanced FM (Front Mid-ship) platform, which positions the engine behind the front axle. This results in an optimized front-to-rear weight balance of 52:48 (V6 RWD), which factors in weight transfer during key handling maneuvers, such as entering and exiting corners.

The FM platform's rigidity has been enhanced for use specifically with the FX by increasing plate thickness of the front side members, side sills and rear wheel housing.

The FX's long 112.2-inch wheelbase and wide track (62.7-inches front, 64.6-inches rear) combine with large wheels and tires (standard 20-inch on FX45) to provide a stable driving foundation – as well as a large interior for both passengers and cargo.

A Choice of Two Confidence-Inspiring Engines

Two engines are available again in 2006, starting with the high-performance power of the 4.5-liter DOHC V8. This advanced powerplant, also used in the Infiniti Q45 sedan, and the M45, has been specially tuned for use in the FX45 and produces 320 horsepower and 335 lb-ft of torque.

The V6 has been tuned specifically for use in the FX35, with a horsepower rating of 280. Torque is rated at 270 lb-ft. A 5-speed automatic transmission with manual shift mode, designed for high torque capacity and light weight, is standard with both V8- and V6-equipped models. A special Snow-Mode function changes the throttle input algorithm in low-speed slippery road conditions (once activated by the driver) for enhanced traction control.

The ATTESA E-TS™ (Advanced Total Traction Engineering System for All Electronic Torque Split) all-wheel drive system utilized on the FX45 and FX35 AWD uses an advanced torque split control strategy that automatically transfers optimum torque to the wheels according to road and driving conditions. It provides outstanding cornering capability due to optimum torque distribution for front and rear (50:50 up to 0:100). The system also provides high starting traction performance and smooth, stable acceleration, especially in snow-covered or off-road situations with the 50:50 torque split at standing start.

The FX's dynamic handling is a result of its advanced 4-wheel independent suspension, which makes extensive use of aluminum-alloy components to reduce unsprung weight. The front suspension utilizes an independent front strut design, while the rear features a multi-link design. Large diameter stabilizer bars are utilized front and rear (front only on FX35 RWD model).

Also available on FX45 models with the Intelligent Cruise Control System is a special feature of the standard Brake Assist system – Preview Braking. Brake Assist with preview function is designed to help improve brake response. Whereas normally braking is activated only when the driver recognizes the need and moves his or her foot to activate the brake pedal, the preview function utilizes the ICC sensors to identify sudden braking situations (by sensing the vehicle ahead in the same lane and the distance and relative speed from it) and "pre-pressurizes" the Brake Assist system before the driver steps on the brake pedal.

An Interior That Combines High Tech with Luxurious Comfort

The RearView Monitor projects a view of what's behind the FX onto the display monitor using a small camera mounted near the rear license plate (the system operates only when reverse gear is selected).

A number of special high tech features are also available, including an advanced DVD-based Infiniti Navigation System and Intelligent Key with keyless entry and engine start system (standard on FX45).

Also available is Infiniti's Intelligent Cruise Control, which uses the brakes, throttle and laser sensors, to maintain a set distance between the FX and a vehicle in front of it.

Five unique leather-appointed interior color combinations are available: Wheat and Espresso/Black two-tone (FX45 only) (both new for 2006), Graphite and the signature Brick/Black two-tone. 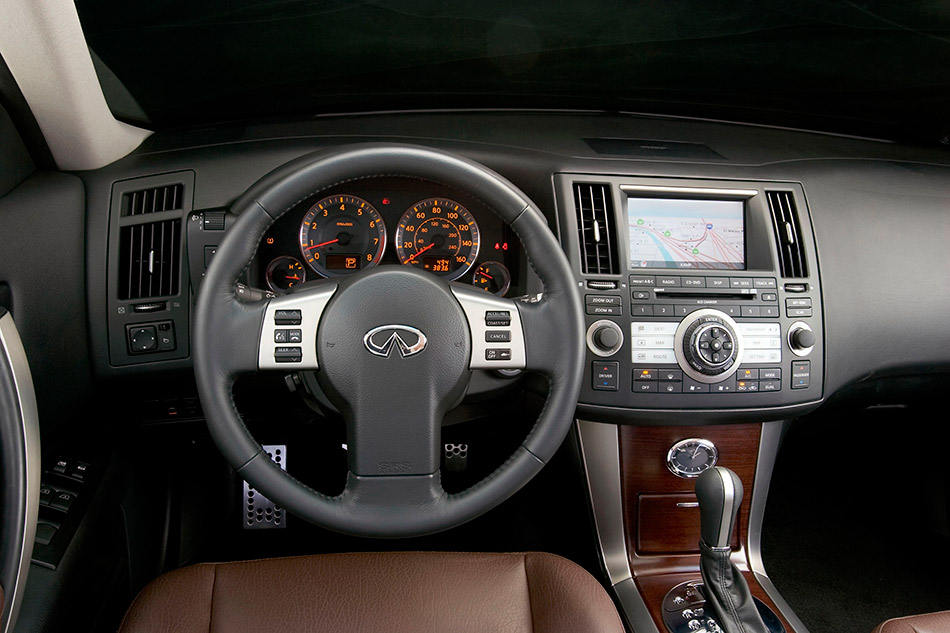 The 2006 FX's available Lane Departure Warning system recognizes lane markings through the use of a small camera mounted behind the rearview mirror. The camera's signal and the vehicle's speed are sent to the system's advanced microprocessing unit, which combines the information to calculate both the distance between the vehicle and the lane marking and the lateral velocity to the lane marking at speeds above 45 mph. A judgment is then made as to whether the vehicle is moving out of the lane (depending on the distance and lateral velocity to the lane).

The Infiniti LDW system is temporarily disabled by driver activation of the vehicle's turn signals, which informs the system's control unit of intended lane changes. The system also features a manual cancel switch, which allows the driver to turn the system off when desired. The system automatically resets when the vehicle is restarted.

The Infiniti LDW system is also available in the 2006 Q45 and M sedans.

Also standard are 3-point ALR/ELR seat belts (driver's side ELR only) and front seat belts with pretensioners and load limiters and adjustable upper anchors. It is also equipped with the LATCH (Lower Anchors and Tethers for CHildren) system.

The FX's SUV-enhanced FM platform Zone Body construction is designed to help protect occupants in a collision by helping to absorb crash energy through use of front and rear crushable zones.

In a high-speed frontal collision, for example, the crushable zone crumples while the engine is designed to move under the occupant compartment. This has the effect of expanding the crushable zone, thereby helping to reduce the deceleration g-force and simultaneously helping minimize cabin deformation, especially in the lower leg area. In offset impacts, the strong body construction helps decrease the amount of cabin deformation.

In addition to the long list of equipment on the FX35, the FX45 includes additional standard equipment, including sport suspension tuning, which has been revised with new shock absorbers for 2006, 20-inch tires and unique aluminum-alloy wheels, aluminum roof rails, auto on/off headlights, Bluetooth® Hands-Free Phone System, sunroof, Intelligent Key, auto up and down feature on front windows, aluminum pedals (accelerator, brake and footrest) and a unique V8 engine cover.