The Infiniti EX Concept, which makes its world debut at the 2007 New York International Auto Show, follows in the tradition of previous Infiniti design studies with its combination of seductive design, elegant interior and advanced technology systems - including an advanced Around View Monitor (AVM) and Lane Departure Prevention (LDP) system. And, like many of the Infiniti concepts that have come before, the new EX Concept is a very real preview of an upcoming production vehicle - the 2008 Infiniti EX crossover SUV.

"The Infiniti FX, M and most recently the new 2008 G Coupe, can all trace their evolution from show stoppers to Infiniti showrooms in a short period of time," said Mark Igo, vice president and general manager, Infiniti Division, Nissan North America, Inc. "With this stunning EX Concept, we're pleased to announce that along with the basic exterior and interior designs, the production Infiniti EX will include much of the EX Concept's innovative technology, including the Around View Monitor and Lane Departure Prevention." 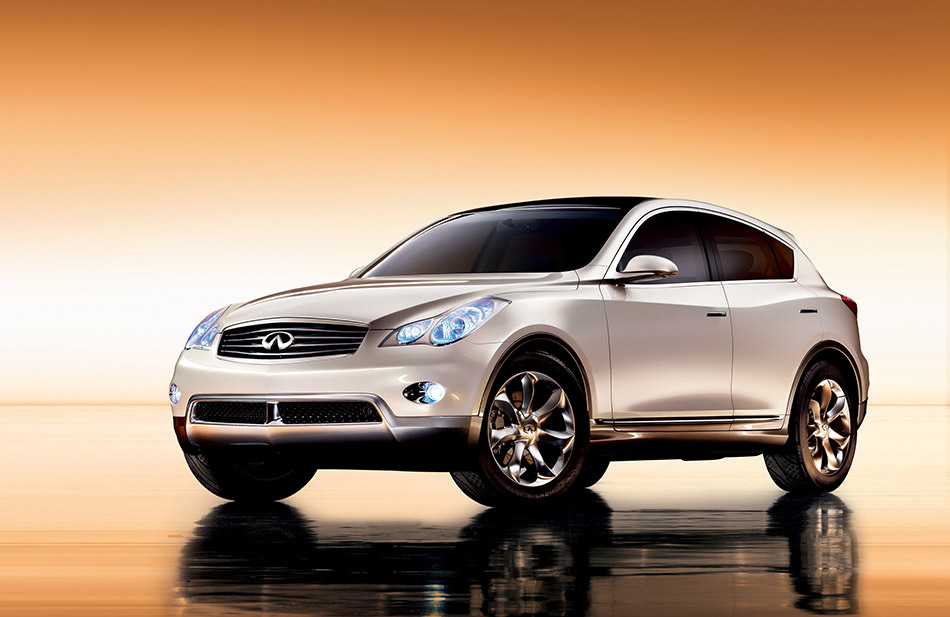 The EX Concept's sculpted elegance expresses a timeless appeal - sleek lines that portray speed, grace and finesse. Its layout combines the look and feel of a luxury coupe - including short front and rear overhangs - and the ample interior roominess, optimised seating height and luggage space of an SUV.

"The EX Concept is the perfect fusion of a luxury coupe and a high-utility SUV," said Igo. "Its 'right-sized' packaging gives it excellent around town manoeuvrability, while the wide rear hatch and low load floor make it a versatile performer for everyday and weekend use."

The most striking exterior design element of the EX Concept is its dramatic liquid crystal full-length glass roof panel that is able to change from transparent to translucent via input from a special touch sensor system.

"The EX Concept's glass roof technology is a fascinating study in how technology can be utilised to change the entire interior atmosphere of a vehicle by adding or subtracting not just light, but the occupants' view of the outside world," said Igo.

Like all Infiniti vehicles, the EX Concept is conceived to offer a reinvigorating and engaging interior environment, one that is both indulgent and inspiring. The "wave-inspired" cabin layout is focused on the driver, with easy-to-read high-contrast gauges with violet-colour illumination and an electric soft-touch shifter system.

"The EX Concept's interior is all about driving pleasure and passenger comfort," said Igo. "Like the exterior, it offers a coupe-like feel but surprising utility - ideal for today's active lifestyles."

Under the EX Concept's dramatic body is an equally advanced platform and powertrain based on the latest Infiniti production hardware. Its advanced FM platform provides the same high levels of handling precision and balance as it does for the Infiniti M, FX and G Coupe and Sedan. For use in the EX Concept, the wheelbase has been shortened to 112.0 inches for a small turning radius, while the rear multi-link suspension utilises a low shock absorber layout to enhance cargo area utility. It rides on 19-inch 7-spoke aluminium-alloy wheels with 245/55R19 tyres.

The EX Concept is powered by a V6 engine, coupled to a 5-speed automatic transmission. The EX Concept also includes an all-wheel drive system.

The EX Concept's advanced technology design is highlighted by two systems that are expected to be the first production versions in the world when the new Infiniti EX goes on sale in North America in late 2007.

The Infiniti Around View Monitor utilises small front, side and rear-mounted cameras to project an all-around view of potential objects on every side of the vehicle - helping reduce blind spots when parking.

The Lane Departure Prevention system builds on the Lane Departure Warning (LDW) system that is currently available on the Infiniti FX and M. Rather than just use an audible/visual warning system to alert the driver of unintentional vehicle movement outside the designated lane, the LDP system uses the vehicle's Vehicle Dynamic Control (VDC) system to help assist the driver in maintaining lane position if the vehicle inadvertently starts to drift outside of the lane.

Both Lane Departure Prevention and the LDW systems use a small camera installed behind the windscreen to detect lane markers in front of the vehicle and calculate its position relative to lane markers and warn the driver of lane drift (pending lane change without use of the turn signal) with a visual display and audible buzzer.

If the driver does not return the vehicle in the direction of the centre of the travel lane, the LDP system assists the driver by using gentle control (generating part of the necessary yaw movement), using the VDC's brake actuator to control the brake pressure of each individual wheel to generate the intended movement..

"Infiniti has taken a leadership position in offering the first production Lane Departure Warning systems for production vehicles. We're now poised to take the next big step with the upcoming EX's Lane Departure Prevention system," said Igo. "We're confident that the production Infiniti EX will be just as stylish, dramatic, luxurious and innovative as this EX Concept show vehicle. The line continues to be drawn."

The Infiniti EX Concept was created at the Nissan Technical Center in Atsugi, Japan.