The Infiniti QX56 meets and exceeds the expectations of full-size luxury SUV owners with ample power from the 315-horsepower* V8 engine, interior roominess with seating for up to eight and maximum utility with generous cargo, excellent towing capacity and rugged off-road capability.

"The QX56 offers the power, roominess, innovation and utility that SUV owners demand in their vehicles," said Mark Igo, vice president and general manager, Infiniti Division. "The QX56 addresses the unmet needs in the SUV class admirably from a hardware standpoint. But it also asserts itself with tremendous luxury and style, more than with just its physical scale and capabilities." 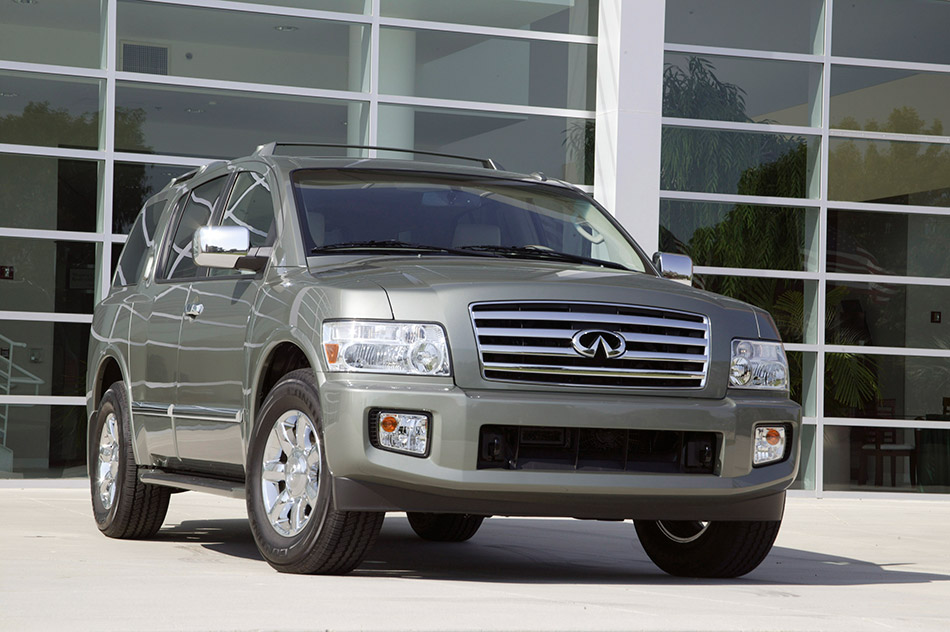 True Luxury in Look and Feel

Infiniti QX56 is designed for luxury SUV buyers who are looking for something new and different, providing a combination of practical elegance and ergonomic thoughtfulness with a rewarding level of comfort and indulgence.

The exterior styling of the QX56 projects a very powerful presence, beginning with its large hood, Infiniti-style chrome "waterfall" grille and taut, barrel-shaped sides. The jewel-like xenon headlights are located low in the fenders, which, combined with the integrated halogen fog lamps, help give the QX56 a strong resemblance to the elegant front end design established by the original Infiniti QX4. The large 18-inch tires are placed close to the edge of the wheelwells, enhancing the athletic stance, while the standard 7-spoke chromed aluminum-alloy wheels and chrome wheel lip moldings – connected visually by the standard body side cladding and running boards – complement the QX56's sophisticated luxury imagery.

The Infiniti RearView Monitor system, like that offered with the flagship Q45 sedan, utilizes a small CCD camera discretely located in the rear license plate finisher to provide a picture of what is behind the vehicle (projected on the QX56's standard navigation system LCD monitor) to help assist in backing up.

The QX56's opulent interior parallels Infiniti cars. Taking advantage of its long 123.2-inch wheelbase and manageable 206.9-inch overall length, the QX56's designers filled the SUV's spacious interior with a high level of roominess, comfort and convenience features – and one other thing, a distinctively luxurious atmosphere.

The interior starts with modern styling of the instrument panel, seats and storage areas and the use of first quality materials such as Sojourner® leather-appointed seating surfaces and thick (16-oz.) Tuscano carpeting. Genuine Dark Macore or Blonde Apaya wood trim is used on the center console cover and steering wheel, with aluminum accents on the steering wheel trim and instrument panel finisher.

The 3rd row seating area, often overlooked in SUV design, treats passengers with the same high level of attention as those in the first two rows. The 3rd row seats are elevated (higher than the 2nd row) to provide a better forward view and to help facilitate easier conversation with forward occupants. The QX56 is the only vehicle in its class with standard 3rd row passenger side curtain air bag protection.

The seat's fold-flat design provides easy operation and easy access, along with cargo hauling flexibility and spontaneity. In addition to ample headroom, the 3rd row provides passengers with individual side storage bins and cupholders.

There is also ample storage space behind the 3rd row seat. With the 2nd and 3rd row seats folded down, the cargo area is nearly flat. Additionally, with the front passenger seat in the fold-down position, it is possible to carry long items with the rear liftgate closed.

The QX56's instrument panel is highlighted by Fine Vision instrument illumination, signature Infiniti analog clock, dual-zone electronically controlled climate control and a standard DVD-based navigation system with 7.0-inch LCD screen. A Bose® audio system with 10 speakers, AM/FM/6-CD autochanger with mp3 playback capability and steering wheel mounted controls is standard on every QX56. The system includes dual media capability, which allows the use of radio and CD at the same time (headphones must be used to listen to second audio source).

For 2006, QX56 adds a stereo head unit capable of playing mp3 CDs as well as a Bluetooth® Hands-Free Phone System. In addition, satellite radio is now offered as a factory option with choice of XM® or Sirius™ services.

Adjustable brake and accelerator pedals with transmission interlock and memory function are standard, part of the Auto Driving Position memory system that includes memory for pedals, outside mirrors and driver's seat.

The QX56 blends responsive acceleration with agile handling through use of its leading edge engine and chassis design.

The QX56's V8 is assembled at Nissan's advanced engine facility in Decherd, Tenn. Nearly 90 percent of the engine's impressive torque is available below 2,500 rpm – where it's needed for hauling, towing or slow-speed off-road driving.

Every QX56 also comes with a standard 5-speed electronically controlled automatic transmission with tow/haul modes for enhanced performance and fuel efficiency. The transmission is geared specifically for use in high torque situations and includes an advanced torque converter design for improved fuel economy and an advanced powertrain management program for smooth shift quality.

A gated floor shifter provides enhanced shift control when towing. The transmission's tow/haul mode revises the shift pattern when towing and hauling. The QX56 has a maximum towing capacity of 9,000 pounds for RWD and 8,900 pounds for AWD.

The QX56's All-Mode 4WD system is designed to instantly distribute torque to all four wheels whenever road conditions warrant (up to 50 percent can go to the front wheels on demand), resulting in optimal traction. Under normal driving conditions, 4WD QX56s operate in rear-wheel drive mode. All 4WD QX56s include heavy-duty skid plates for the oil pan, fuel tank and transfer case.

All QX56s are built on a durable fully boxed, high-strength steel F-Alpha frame and features standard Dana front and rear axles. The combination of comfortable ride and responsive handling comes from the 4-wheel independent double-wishbone suspension with front and rear stabilizer bars. 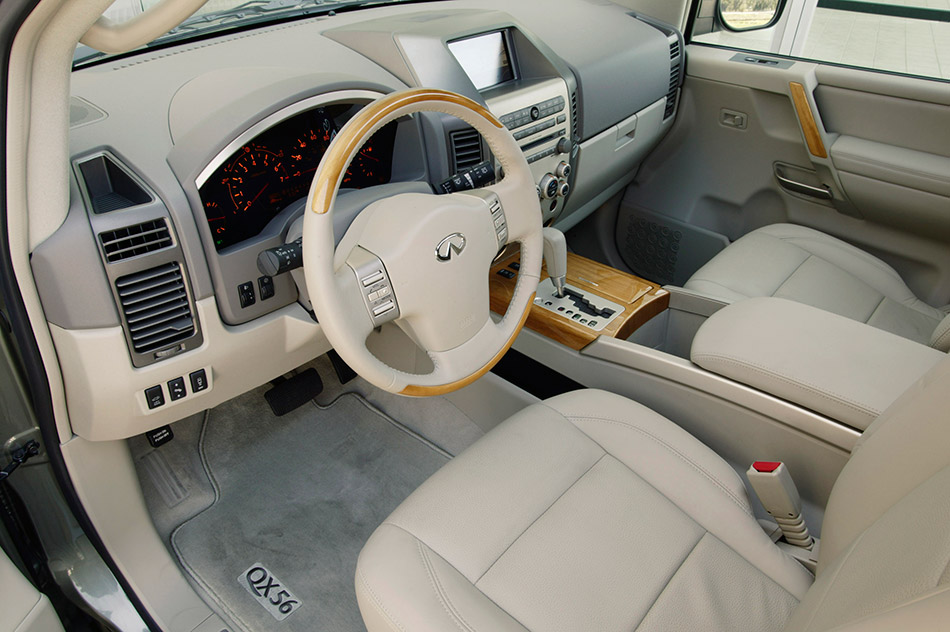 An advanced rear auto-leveling air suspension is also standard on every QX56, helping provide better handling stability and ride comfort when towing or hauling cargo. The air suspension also maintains uniform ground clearance and departure angle, even when towing or carrying cargo, by automatically adjusting the air pressure in the system's air bladders.

"The QX56's independent rear suspension benefits users in many ways – optimizing ride and handling on rough roads, improving ride quality for occupants in the 2nd and 3rd row seats and maximizing rear interior space through its low-profile design," said Igo. "This is one more way that QX56 owners get the benefits of full-size SUV utility without being penalized in the areas of ride comfort and handling."

Optionally available is Infiniti's advanced Intelligent Cruise Control, which allows the QX56 driver to maintain an appropriate distance from the vehicle ahead. Using a combination of laser sensors, throttle and brake actuators and the QX56's braking system, a laser signal measures the distance to the vehicle ahead, then automatically adjusts the QX56's speed to maintain a pre-selected following distance. (The system is not intended for congested areas or city driving and will not brake the vehicle to a complete stop.)

Also available is Preview Braking. Preview Braking works side-by-side with Brake Assist. Whereas normally braking is activated only when the driver recognizes the need and moves his or her foot to activate the brake pedal, the preview function utilizes the ICC sensors to identify potential sudden braking situations (for example, by sensing the vehicle ahead in the same lane and the distance and relative speed from it) and "pre-pressurizes" the Brake Assist system before the driver steps on the brake pedal. This helps maximize braking response and performance by reducing the normal brake system activation time.

Everything You Want in One Fully Equipped Model

The QX56 full-size luxury SUV is designed to take the complexity out of the buying decision. The QX56 comes in one model, in a choice of rear-wheel or four-wheel drive. Standard equipment includes the 5.6-liter V8, 5-speed automatic transmission, 4-wheel independent suspension with auto-leveling rear, leather-appointed seating, advanced Bose audio system, navigation system, RearView Monitor and much more.