"The new G35 Sedan, which has been named to both Car and Driver's '10 Best Cars' and Automobile magazine's 'All-Stars' list, has set the stage for the introduction of the new Infiniti G37 Coupe," said Mark Igo, vice president and general manager, Infiniti Division. "The new Coupe builds on the styling, performance and interior enhancements of the G Sedan, adding the dynamic style, sporty atmosphere and expressive driving character expected of a class-leading luxury sport coupe. The line starts here." Leading the enhancements to the 2008 Infiniti G37 Coupe is the first-ever application of the new 3.7-litre V6 engine with VVEL (for Variable Valve Event and Lift).

Estimated at 330 horsepower and 270 lb-ft of torque, the new "VQ37VHR" contains approximately 35 percent new and unique parts from the new VQ35HR engine introduced in the 2007 G35 Sedan just last year. Both the Coupe's VQ37VHR and the Sedan's VQ35HR engines are based on the award-winning VQ engine series, named one of the "Ten Best Engines" by Ward's Auto World magazine for 13 consecutive years.

Rated at an estimated 330 horsepower, the new engine is not only considerably more powerful than the previous generation G Coupe (rated at 275 hp with 5AT, 293 hp with 6MT), but is expected to offer increased fuel mileage and reduced emissions levels. Overall vehicle fuel economy improvements are estimated to be nearly one mpg better than the G35 Sedan and nearly two mpg better than the previous generation Infiniti G35 Coupe (actual EPA mileage estimates and emission information to be announced at a later date).

"The new 3.7-litre V6 is a true powerhouse - becoming more enjoyable as you drive it," said Igo. "And, this powerplant also features Infiniti's trademark "Swell" acceleration - introduced on the new G Sedan last year - with special tuning that builds horsepower almost continually to the redline like a building wave."

Developed at test circuits throughout Europe - including the famed Nürburgring - the Infiniti G37 Coupe was conceived as a performance thoroughbred. Handling and ride performance increases come from the Infiniti G37 Coupe's enhanced FM (Front Mid-ship) platform, which has been stiffened 36% from the previous generation, is lower in overall height and has a wider front and rear track width.

The front suspension is a double-wishbone design, with a single pivot lower wishbone and a long upper link. The multi-link rear suspension separates the shock absorbers and springs, locating the shock absorber inline with the wheel centre. These designs help minimise alignment changes and reduce suspension friction for nimble handling and smooth riding characteristics.

Steering is provided by a twin-orifice vehicle-speed-sensing design, which provides optimum steering effort at both high and low vehicle speeds. Standard on all Infiniti G37 Coupes is Vehicle Dynamic Control (VDC), which assists in enhancing vehicle stability under a variety of driving conditions.

Also available on Infiniti G37 Coupe is Infiniti's Intelligent Cruise Control (ICC) with Preview Braking, which provides a precise following distance from the vehicle ahead. It also identifies sudden braking situations with laser sensors to determine distance and relative speed of the vehicle ahead in the same lane and "pre-pressurises" the Brake Assist system before the driver steps on the brake pedal.

"Compared with its predecessor, the Infiniti G37 Coupe is longer, lower and wider - indicative of the power and technology of the vehicle," said Igo.

The strong side character line and side sills integrate with the large wheel wells and the 18- or 19-inch performance-oriented wheel and tyre packages to transmit an added sense of power and vibrancy. 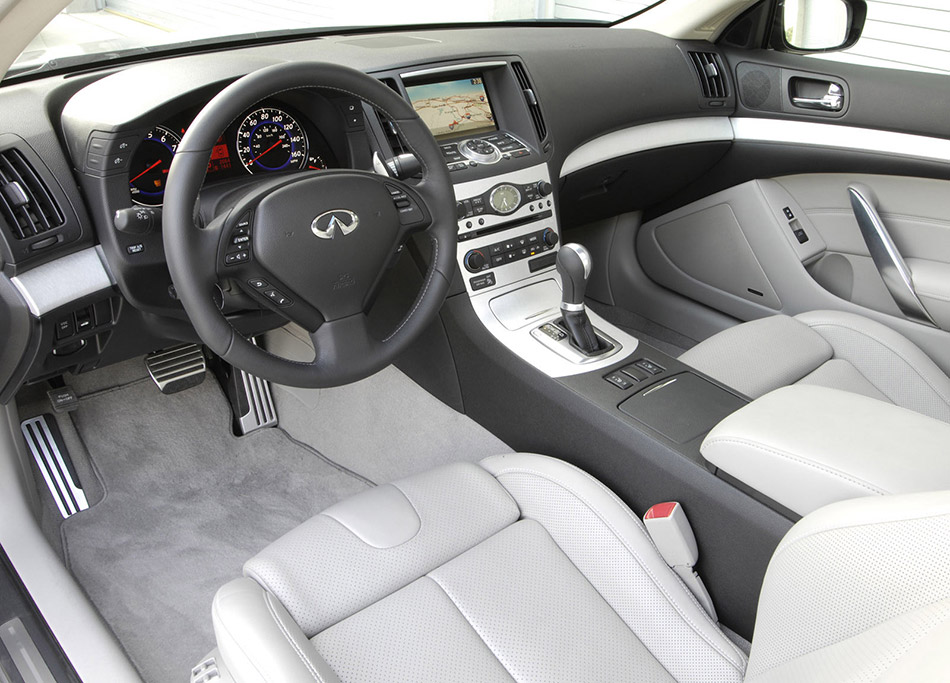 Available on the new Infiniti G37 Coupe is an Adaptive Front lighting System (AFS), which automatically controls the headlight lighting pattern according to steering angle and vehicle speed to help provide better visibility at night.

Also standard are 3-point ALR/ELR seat belts (driver's side ELR only) and front seat belts with pretensioners and load limiters and adjustable upper anchors, driver and front-passenger knee bolsters, front seat Active Head Restraints and the LATCH (Lower Anchors and Tethers for CHildren) system. Available as part of the Technology Package are brake-operated pre-crash seat belts with motion sensor on the brake pedal.

The Infiniti G37 Coupe features Zone Body Construction with front and rear crushable zones to help disperse crash energy around the passenger compartment. For occupant safety, the engine is designed to move under the occupant compartment in a high-speed frontal collision, while a breakaway construction of the propeller shaft (connected with the engine-drop function) and the double-wall construction of the bulkhead helps to minimise cabin deformation, especially in the lower leg area. In addition, the brake pedal is designed to collapse to help reduce lower leg injuries in a severe crash.

The 2008 Infiniti G37 Coupe is available in three models: G37 Coupe, G37 Coupe Journey and G37 Coupe Sport 6MT. In addition to the long list of standard features on all three models, several options and packages are available.

"When the original G Coupe was introduced, it proved to the world that exhilarating sport coupe performance doesn't have to come in a machine-like box," said Igo. "This new Infiniti G37 Coupe, which we're proudly showing for the first time anywhere in New York, is pure G and pure Infiniti - and ready to take centre position on the world automotive stage."