The essence of the Infiniti brand distilled into one car and then taken to the extremes to satisfy the world's most demanding car enthusiasts... this is the Infiniti Essence Concept.

Presented as a concept at the 79th International Motor Show of Geneva, Infiniti Essence Concept is a celebration of Infiniti and its 20 years history as a creator of performance cars. But equally it is an inspiring exploration into the brand's future.

The dramatic design, technology and performance statement is a 600PS, petrol/electric hybrid coupe with rear-wheel drive. What Infiniti Essence Concept is not is merely an indulgent birthday present from Infiniti to itself.

This concept embodies Infiniti's core values as an inspiration for the future as much a celebration of the past. Infiniti Essence Concept showcases many of the technologies, including hybrid, and design cues that will distinguish Infiniti production cars of the coming years. And by steering Infiniti's guiding principle of "Inspired Performance" into the super-performance, super-luxury coupe market for the first time, it reaffirms Infiniti's place among the world's most exclusive and vibrant car brands. 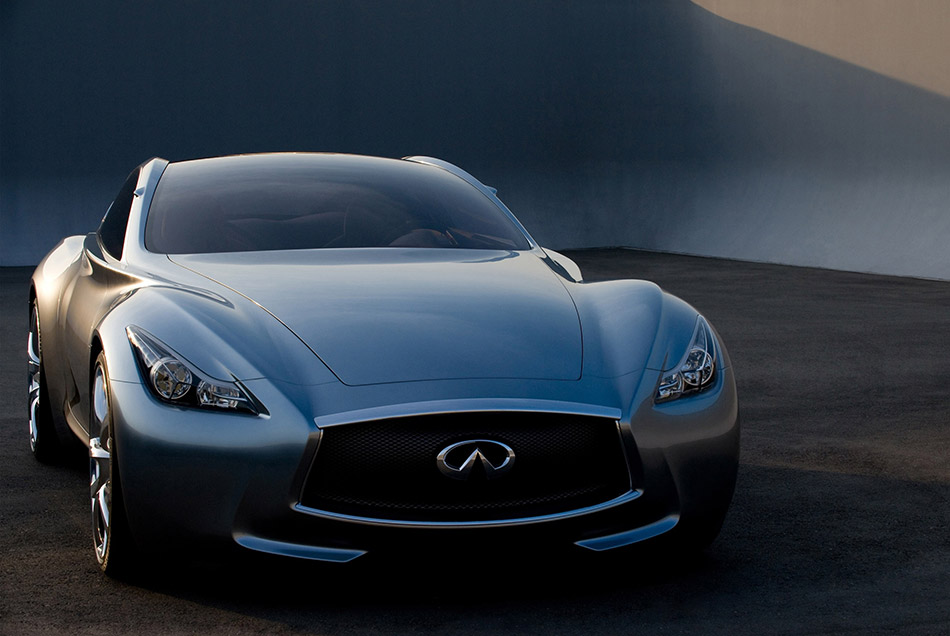 With breathtaking good looks and perfect proportions, Infiniti Essence Concept exerts a powerful pull on all those who love cars. It looks like a driver's car, one that would be right at home spearing down the world's grandest motoring routes.

But Infiniti Essence Concept is no aggressive sports car. Infiniti's "Dynamic Adeyaka" attitude ensures Essence is single-minded, but also inviting, sophisticated and born of inspiration from both the human and natural worlds. To further boost its emotional appeal, it features details that bring a very modern take to some very old Japanese traditions.

The designers' aim was to merge all existing Infiniti design cues with fresh design language in a shape that the 20-year-old marque has never before attempted. The result is highly sculptural yet also very delicate. Infiniti Essence Concept speaks of power but not intimidation.

The bonnet is, as you would expect of an Infiniti, long, and the rear deck short. Together with a flowing "wave" profile between muscular front and rear wheelarches, Infiniti Essence Concept at first appears to be in the classic sports car mould. But there is nothing retro about Essence.

The side window graphics bring a particularly innovative and distinctive edge to the styling. The window appears to be resting on a ledge, its razor sharp line in contrast to the concave sweep of the upper body just below it. Imagine juxtaposing flowing water with the stark outline of a canyon landscape.

The rear section also features complex surfacing with concave "scoops" that flow down the rear pillars from one of Infiniti Essence Concept's most distinctive design cues: a C-shaped kink to the side windows' trailing edge. Outlined by a wide flourish of stainless steel, it adds instant movement to the car even when it is standing still.

One of the most distinctive details is the trim around the side air vents. The simple yet delicate shape, finely finished in aluminium, is based on the "kanzashi", a hairpin used by women when wearing the kimono. Other lines and details are inspired by the wide brush strokes of Japanese calligraphy. Infiniti Essence Concept represents a successful merging of iconic cultural cues with automotive aesthetics.

Essence's front is characterised by Infiniti's signature double-arch grille, set at an angle that suggests the car is about to leap forward. There is an illuminated Infiniti badge at its heart. Rounded corners effectively hide the front overhang and make this 4.7m-long car appear anything but big in the flesh.

The grille is framed by subtle strips of stainless steel but there's little other trim and no other grilles or intakes, not even foglights. At the front as over the rest of the car, Infiniti Essence Concept eschews superfluous body embellishments that could interrupt the graceful strength of the whole. The door handles are slithers of push buttons flush with the body while even rear-view mirrors must make way for minuscule cameras teased out of the A-pillars.

More familiar Infiniti cues include the lights. At the front the signature L-shaped modules taper back on to the bulging guards, picked out at their top edge by a row of LEDs. Slender fillets of red light curve around the car at the back, overlapping with the boot opening and framing the vestigial spoiler. Edged by more stainless steel, the spoiler appears to have been pushed out from within the car.

The windscreen flows back into a full glass roof that then tapers down towards the boot opening - making just one more memorable view of a car that doesn't have a wrong angle to it.

On design, Infiniti Essence Concept is simple and amazingly complex, classical and totally dynamic all at the same time. Most of all as the epitome of "dynamic adeyaka" it boasts massive presence. Once seen, never forgotten.

For a driver's car, the perfect driver's cabin. Essence's interior is minimalist, ergonomic and totally focused on the job in hand: to give the person behind the wheel a feeling of absolute control. And yet all this driver focus goes hand in hand with a passenger area dominated by comfort, calm and elegance to offer the kind of hospitality that is so important to the Japanese people, and also to Infiniti Essence Concept.

The asymmetrical cabin is divided into two areas separated by a large curving console between the seats that sweeps around to merge with the centre of the dashboard. The result is two very distinct cocoons. The driver's side is themed black, the passenger's "cocoon" an earthy red.

A flat-bottomed steering wheel and chronometer-style dials announce to the driver this is a serious performance machine. There are no gimmicks or sci-fi solutions here, just single-minded dedication to driving. Witness the technical nature of the displays, the short, alloy-topped gear selector and, just in front of it another finger-flick away, the bright red engine start button.

The car wraps itself around the driver who can quickly relax with the Infiniti trademarks of supportive seat and perfect driving position. There are more Infiniti cues such as the big gearchange paddle shifters behind the wheel and the analogue clock in the centre of the dash.

Infiniti designers believe the best functionality works behind the scenes, appearing only when needed. They call this "hidden tech", and it's the key to the functional minimalism that dominates the control layout. By not baffling drivers with buttons or overburdening them with information, Infiniti Essence Concept offers a sense of well-being to everyone, allowing them to focus entirely on enjoying the energizing driving experience.

With the materials used - leather, Alcantara, hand-painted wood inspired by traditional Japanese lacquerware - the cabin exudes a rich and inviting warmth. Attention to detail is such that even the leather seams on the seat backs differ from left side to right side. Why? So they can accurately reflect the way Japanese men and women tie their kimonos.

Essence's interior promotes a sense of well-being which is key to the Infiniti driving experience.

The hybrid system is a logical extension of Infiniti parent group's groundbreaking green commitments. It offers power with efficiency, and high performance with zero-emissions running, by combining a petrol engine with an electric motor. These can work independently or together as a "parallel" hybrid system.

In congested urban areas, the electric motor alone is all that is needed for Infiniti Essence Concept to glide silently between stoplights, with no tailpipe emissions.

When the traffic clears, Essence responds with a highway performance that few cars could match. In "power assist" mode the full 600PS is unleashed with both petrol and electric power working together.

A key difference over some other hybrid systems is that both the V6 and the electric motor feed their power only to the rear wheels. Performance is more linear, response is crisper - and driving pleasure further enhanced - as a result.

Infiniti Essence Concept previews a new type of electric motor, called 3D Motor, that was designed to meet tough requirements on size and power output. The result is a particularly slim, disk-shaped motor that has twice the torque of a conventional unit. Its design was achieved by 3D magnetic field analysis to optimize the layout of the electromagnetic coils and permanent magnets.

In Infiniti Essence Concept, the motor is positioned between the engine and transmission and provides 160PS (158bhp), drawing power from a compact lithium-ion battery pack in the boot area. Because the 3D Motor operates in both propulsion and power regeneration modes, the battery pack is kept charged up.

Optimized energy useage across the widest possible range of driving conditions is guaranteed by two separate clutches which "switch in" the motors as required. It is a system that needs no torque converter, further enhancing responsiveness and driving pleasure.

On a global level, Infiniti is committed to building safer vehicles equipped with advanced safety technologies.

Infiniti Essence Concept previews some of the next-generation safety features that will ensure Infiniti cars remain among the safest on the road. Chief among them is a "Safety Shield" that goes a long way towards the Infiniti engineers' dream of a collision-free car.

With SCP, when the driver decides to change lanes, side-mounted sensors activate a warning if an approaching vehicle is detected in the driver's intended lane. A yaw mechanism is then activated through brake control of individual wheels to help prevent a potential collision. Back-up Collision Prevention works in a similar way, sensing a vehicle behind, giving the driver a warning but then, if the warning is not heeded, activating the brakes automatically.

The warning system and pre-emptive safety features are designed to help support the driver in an intuitive manner with minimal intervention.

The team behind Infiniti Essence Concept harked back to an early motoring era to find the right solution for carrying luggage. The result is as classy as luggage ever gets, surprisingly practical and dreamily romantic. It also re-establishes the historic ties between a carmaker and one of the best-known names in luxury goods - Louis Vuitton.

Vuitton first worked with a coachbuilder - the famous Kellner company - in 1908, equipping one of their early luxury limousines with a set of bespoke luggage. Other coachbuilders quickly beat a path to Vuitton's door in Paris. Made-to-measure Vuitton trunks were an integral feature of some of the greatest cars of the first part of the 20th century.

The collaboration between Infiniti and Vuitton revives the idea of a set of the highest quality luggage made to fit exactly a car's boot area. In Infiniti Essence Concept there are three rigid pieces: a matched pair of slender briefcases atop a large trunk. All are made in the new Damier Graphite canvas and feature sleekly integrated handles and an overall design in harmony with the car itself.

There is hi-tech, too. A button on the key fob electrically opens the boot lid, allowing the boot floor to slide silently rearwards. This is one boot an owner will never have to struggle to access.

In a nod at tradition, the cases even bear the initials of their owner - SN, standing for Shiro Nakamura, Senior Vice President of Design.