Making its world debut at the 2011 Geneva Motor Show, the Infiniti Etherea Concept re-imagines the compact luxury car for a discerning new generation of younger buyers, while providing a glimpse of a future European Infiniti line-up where the brand's convention-defying distinctiveness reaches into the compact class for the first time.

"Etherea is about a new type of luxury," said Toru Saito, Corporate Vice President and Leader of the Global Infiniti Business Unit.

"It is for younger buyers who do not want a smaller version of a typically conservative and traditional luxury car. It is for people who want a car that defines who they are, not who their parents were."

Encapsulating everything that Infiniti stands for - including no-compromise hybrid power and maximum driving pleasure - in a car 4.4m long, Infiniti Etherea Concept proposes a bold new approach to the premium compact segment. Its dynamic character and highly sculptural, near mono-volume form provide a silhouette unlike anything currently in the class. 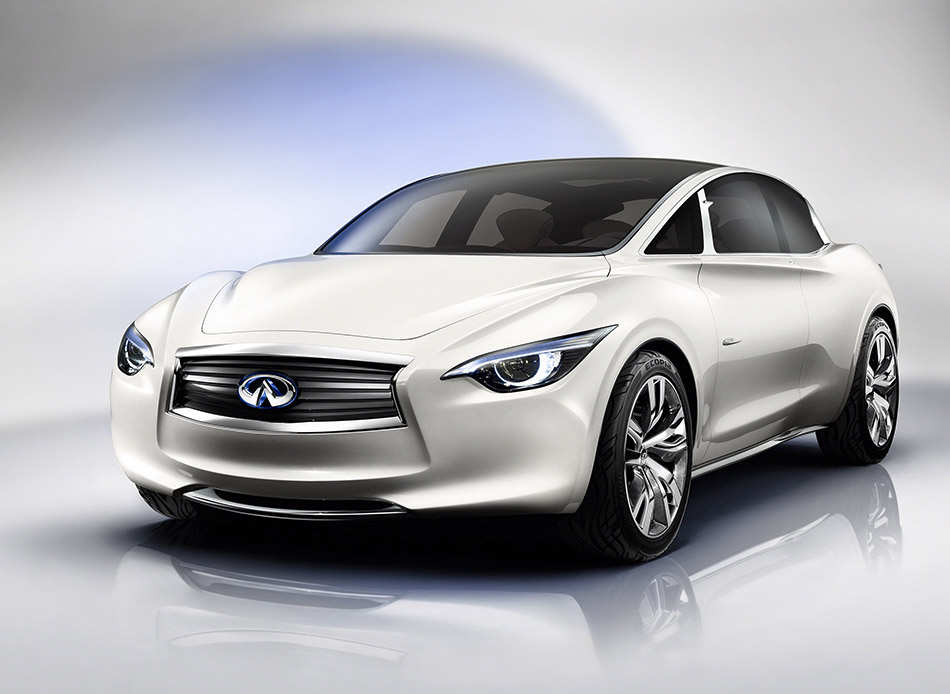 "Etherea is completely different from current luxury compact cars," said Senior Vice President of Design, Shiro Nakamura. "That is appropriate for a new generation of drivers who think of themselves as different.

"As an exploration into what a future entry-level Infiniti may be like, Infiniti Etherea Concept is highly significant and a breakthrough in what Infiniti thinks about itself."

Francois Bancon, General Manager of Exploratory and Advanced Product, said: "We think the market - and buyers of compact cars - is ready for a car like this, especially in Europe. As a vehicle to single out its owner as progressive, self confident and a little off the beaten path, Infiniti Etherea Concept fits very well with what Infiniti is all about."

Infiniti Etherea Concept's segment-busting appeal is based on the coming together of several vehicles styles. It is part elegant coupé, part spacious sedan, part practical hatchback and even part tall crossover. And being an Infiniti, there is also a large helping of sports car in the way it drives.

Like all Infinitis, Etherea puts driving pleasure high up alongside design. The concept car has been designed for a potent yet highly efficient hybrid drivetrain based around an in-house platform and the innovative one electric motor/twin clutch system used in the Infiniti M35h, the marque's first hybrid currently going on sale around Europe.

A supercharged 2.5-liter 4-cylinder petrol engine developing 245 PS provides quick response and strong acceleration throughout the performance range. Boosting power when more is needed, and providing silent, emission-free driving at low speeds, is an electric motor. The transmission is a continuously variable (CVT) type and, in an Infiniti first, drive is to the front wheels.

Like the M35h, the hybrid powertrain is designed to use clean electric power more often, for longer periods and at higher speeds than hybrids generally manage, endowing Infiniti Etherea Concept with a hybrid's advantages out on the open road as well as in busy city streets. This maximises efficiency and cuts CO2 emissions even further while imposing no compromises on the driving front.

Designed in Japan under the direction of Shiro Nakamura, Etherea is more coupé than hatchback in inspiration, with many Infiniti flourishes first seen on the Essence concept supercar. However, Infiniti Etherea Concept's elegant profile is not at the expense of practicality. Despite appearances, Etherea boasts a large lift-up tailgate.

Utilising an in-house platform developed for use by Infiniti, the long wheelbase and minimal overhangs guarantee characteristic Infiniti visual poise and sporting appeal. The bonnet may not be as long as that of rear-drive Infinitis, but the proportions are just as finely judged and the overall look just as balanced, with the unique crescent C-pillar offering a dynamic, and very distinctive, Infiniti signature.

The spacious four-seat cabin offers all the luxury that Infiniti owners expect plus unrivalled ease of access and egress, boosted by an H-point which is higher than that of the average compact luxury car. Four wide opening doors, rear-hinged at the back, and an absence of B-pillar offer an unprecedented feeling of openness.

Familiar Infiniti design language has evolved to meet the challenge of the concept car. The headlights, for example, define the Infiniti "face" more clearly than ever. With a subtly curving shape, the lamps incorporate daytime running lights formed out of a crescent of LEDs. Going forward, the new lights are destined to become a familiar Infiniti characteristic.

"Other elements of exterior design and interior craftsmanship are set to have an important influence on future production models," said Shiro Nakamura.

Project leader and exterior designer, Giichi Endo, says Etherea can be summed up as a "four-door coupé with five-door practicality - a hatchback that doesn't look like a hatchback." Key was managing the new front-wheel drive architecture - all very different from the rear-drive FM platform that Infiniti designers are used to working with - to provide the traditional Infiniti "seductive lustre" to the design while delivering the interior roominess crucial for a car in the 4.4m class.

Wide opening doors, the rear doors hinged at the back, and no B pillar were central to the idea of being able to make the cabin as open and welcoming as possible. Access is further eased by the car's height. Infiniti Etherea Concept is not a crossover but with a driver H (hip) point higher than in a regular compact car, it does hint at the easy access and commanding driving position that distinguish an Infiniti such as the FX. The designers have dubbed the slightly elevated body style the "Lift-up".

The front of Infiniti Etherea Concept offers an unmistakable impression of solidity. In a design that instantly links it to the rest of the Infiniti family, the high bonnet line is fronted by a deep grille. An updated version of Infiniti's familiar double arch design, the grille's translucent mesh finish with illumination is both entirely functional and highly artistic.

Shiro Nakamura says in profile there is a suggestion of a mono-volume design - very different from current contenders in the compact luxury segment.

The design highlight for Nakamura, however, is the area around the base of the A-pillar - as he says, one of the most complex areas for a designer to get right in any car. In Etherea, this area is executed in a style unlike that of any other car - apart from Essence, which again provides the inspiration. Key to making it work is the front fender whose exaggerated length extends to the A-pillar in a highly sculptural coming together of planes. A small quarter window in the A-pillar guarantees a clear view out. It all makes for a contemporary and innovative design that injects energy into the whole car. 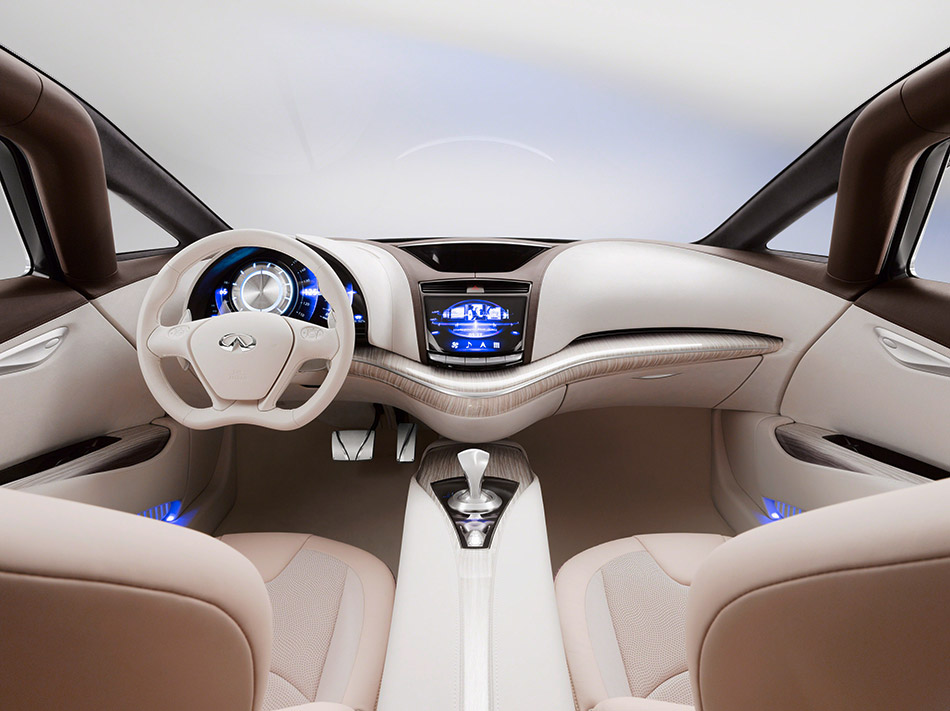 Just as the front-wheel drive platform presents new design opportunities for an Infiniti on the outside, so too does it allow a bold new approach in the cabin. With its flat floor and welcoming openness, Infiniti Etherea Concept's interior is designed for comfort and space while offering the luxury and craftsmanship Infiniti buyers expect. As Francois Bancon says, "Your first premium luxury car experience should feel like this."

The B-pillar-less design and opposing doors opens up the cabin and highlights its easy access and excellent roominess. With no transmission tunnel and a flat floor, the welcoming openness of Etherea's cabin extends throughout the car, with only elegantly slender consoles between the four seats to act as armrests and house ancillary controls.

Like any Infiniti the driving position is sporting. The control layout is very driver centric, though not in a way that excludes passengers. Here is a concept where the luxury and sportiness can be shared by all. For example, the centre of the dashboard features twin screens, both as easily accessible to the front seat passenger as the driver. The lower, nearer display is a touch-screen for control of functions such as climate control and entertainment, while the screen further away is used purely to display information.

"Hamon" is the Japanese word for the dashboard dials. It refers to the ripples on a pond that radiate outward when a pebble is thrown into the water. In the same way, the dials radiate outward from the central tachometer. It is an elegant, as well as highly ergonomic, solution.

Harmonious design and materials are central to Infiniti Etherea Concept's interior, just as they are to any Infiniti. Features making their debut on Etherea include Kumihimo, the kimono-inspired piping on the seats, and Inuyarai, the striking vertical strips on the inside of the doors. Etherea also debuts Infiniti's newest trim, a version of the parchment paper-style finish known in Japanese as Washi. The new finish is called Kasane-Washi and introduces a new way of layering the paper, enhancing its texture. The craftsmanship in Infiniti Etherea Concept is inspired by Japanese culture and re-interpreted through leading-edge technologies.

As an exploration of a future entry-level Infiniti production model, Etherea breaks free of existing market segments while showing that Infiniti, with the help of its Alliance partners, is serious about competing in both the compact luxury class and in Europe.

Francois Bancon said: "Etherea represents a redefinition, not a revolution - a car for buyers whose idea of luxury is very different from the stereotypes. Infiniti Etherea Concept is not a stereotype. It is a little bit borderline. It is an expression of identity and personality. It adds new values, as well as conveying existing ones. More than anything it is not just another luxury compact car."