Infiniti QX starts with a breathtaking presence, a calm strength derived of clean fluid lines that attract and hold your attention. It continues with the highest level of luxury, not just for the driver and front seat passenger, but all occupants - world class, personalized control over their environments for passengers in every seat in the house. Add in an exceptional driving experience provided by a powerful yet efficient V8 engine design and available Hydraulic Body Motion Control system. Then top it all off with intuitive functionality, which anticipates and responds to the users' needs and desires. Introducing the all-new 2011 Infiniti QX, the latest example of inspired design, performance, technology and craftsmanship from Infiniti. Available in two models, the Infiniti QX56 4WD 7-passenger and QX56 4WD 8-passenger, it is scheduled to go on sale at Infiniti retailers nationwide in summer 2010. 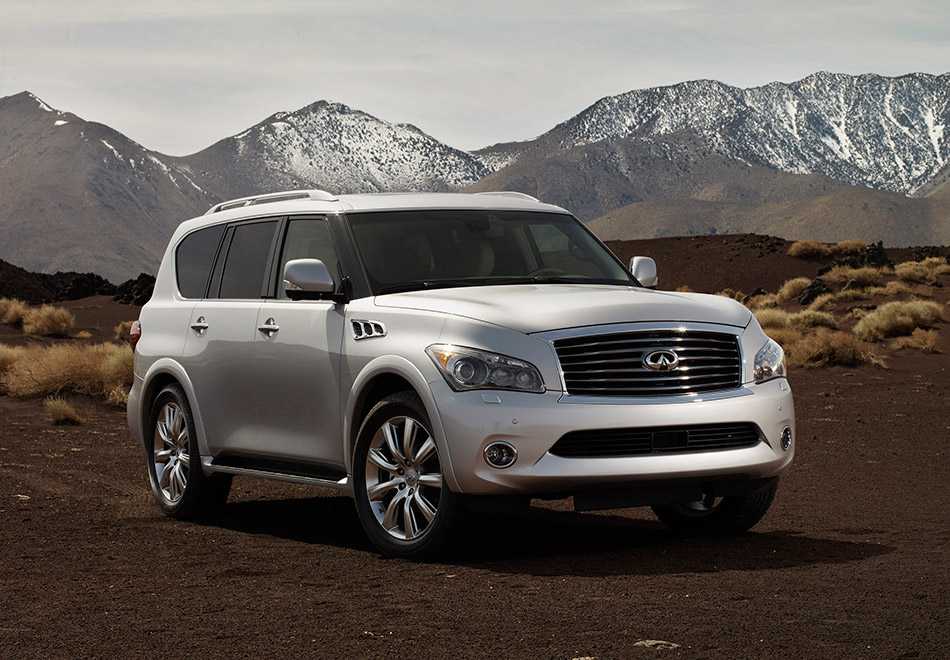 The second-generation Infiniti QX has been totally redesigned from the platform up. Its new high-stiffness frame structure enhances ride comfort while reducing noise, vibration and harshness. The new 5.6-litre V8 engine combines the responsive acceleration of Infiniti's VVEL (Variable Valve Event & Lift) technology with the efficiency of Direct Injection Gasoline (DIG?) and 7-speed automatic transmission. With 400 horsepower and 413 lb-ft of torque, the Infiniti QX can handle tasks such as towing boats or trailers (8,500-pound towing capacity), while also offering over 10% better fuel economy than the previous generation Infiniti QX.

An All-New Exterior With A Breathtaking Presence

The 2011 Infiniti QX is conceived to attract and hold viewers' attention, conveying its underlying sense of power and strength. The design is dynamic, its size capable of transporting eight adults and their belongings with spacious elegance. The bold front chrome grille is flanked by automatic on/off bi-functional xenon headlights with pop-up headlight washers and integrated front fog lights. Auto-leveling headlights with Adaptive Front lighting System (AFS) are optionally available.

"The look is clearly Infiniti with its signature Infiniti grille, broad shoulders and large greenhouse," said Durward. "It's rugged, sophisticated and completely captivating."

Power and Innovation Under the Skin

The 2011 Infiniti QX's all-new body and frame are designed to provide enhanced body stiffness and reduced vibration versus the previous QX design.

Structural changes include a new high-stiffness frame structure with enlarged side rail section width, redesigned connecting structures between each crossmember and side rails, an integrated rear hitch member, improved stiffness of the cabin mounting points and a special rear body ring structure around the tailgate.

"Customers will never be aware of the extensive efforts taken in the development of the Infiniti QX frame and body to reduce flex, rattles and squeaks - they'll just enjoy a quiet, comfortable ride that's unexpected in a full-size SUV," added Poore. "The new platform can handle family adventures to rugged terrain, without compromising its smooth ride for everyday, around-town cruising."

The Infiniti QX is offered with standard four-wheel drive, featuring Infiniti's proven All-Mode 4WD? system with Auto, 4H, and 4L modes. The system is designed to distribute torque to all four wheels when road conditions warrant (up to 50 percent can go to the front wheels on demand), helping to enhance traction.

For the first time ever on an Infiniti vehicle, a new Hydraulic Body Motion Control system is offered (available as part of the Technology Package, which also includes 22-inch wheels and tires and a number of other features). The system helps reduce body lean while turning for a more comfortable ride. Utilizing hydraulic cylinders located at the shock absorbers (connected via cross piping and two accumulators), it adjusts roll stiffness by allowing transfer of fluid between the left and right sides of the vehicle through passive weight transfer during normal driving. It also helps reduce bump shock by setting bounce and roll damping forces separately.

The Infiniti QX's suspension is an independent double-wishbone design front and rear, with Dual-Flow Path? twin tube shock absorbers, stabilizer bars and an automatic rear leveling system that seeks to maintain uniform ground clearance and departure angle, even when towing or carrying cargo, by automatically adjusting the air pressure in the system's air bladders.

The Infiniti QX's maximum towing capacity is 8,500 pounds. A special tow mode revises shift patterns when engaged. Standard towing features include a Class IV tow hitch and 7-pin wiring harness integrated into the rear bumper (with a cover for an elegant appearance when not in use).

"The new Infiniti QX gives drivers the feeling of a connection to the road," said Durward. "There's also a remarkable level of flat ride comfort, plenty of power and torque, and a solid feel throughout the vehicle that's reassuring and enjoyable for all passengers."

Also standard is a remote release for the 2nd row seats to activate the tip-up function through a switch on the centre stack. The 3rd row seat is a 60/40-split power folding design with reclining capability. The 2nd row centre console includes two cupholders and two storage bins.

Also standard is a heated, leather-wrapped steering wheel. Ample space for luggage is provided with the 3rd row seat up. When down, the flat load floor offers a wide, versatile space for carrying cargo, home furnishings or recreational gear.

Two interior colors are available - Wheat or Graphite - both with a dark wood-tone interior finisher trim.

"If you could take the interior of a private jet and transform it into a full-size SUV, this wouldn't be far off," said Durward. "From its available sofa-like semi-aniline leather seating to its premium audio and three-source entertainment systems, the Infiniti QX interior is world-class. It's a highly adaptive environment, with a quality and quietness that adds to the stress-free driving and riding experience."

Among the new Infiniti QX's standard premium entertainment and technology features are an 8-inch WVGA color touch-screen display, Infiniti Controller for use with vehicle information systems and comfort and convenience features, and the Infiniti Hard Drive Navigation System with Zagat? Restaurant Guide. Bluetooth? Hands-free Phone System is standard, as is the convenient Around View? Monitor with Front and Rear Sonar System. The Around View? Monitor includes a new wide rear view camera. 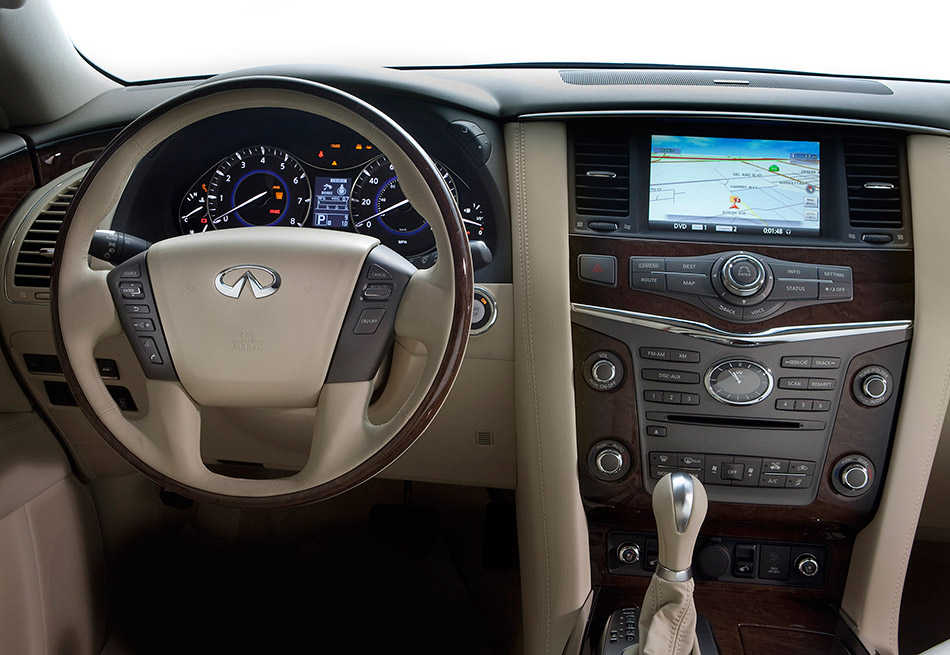 Other standard equipment includes a single in-dash CD/DVD player with MP3 playback, XM? Satellite Radio, USB connection port for use with iPod Interface or other compatible devices and Streaming Audio via Bluetooth.

Other standard features include dual 7-inch colour headrest monitors, two pairs of wireless headphones, wireless remote control, auxiliary input jacks and 120V power outlet. The Infiniti QX allows playback of games or movies in the rear, while front occupants listen to audio all at the same time. The two 7-inch colour monitors include an auto-bright system that adjusts for daytime, clouds/evening and night/tunnel lighting.

Like the new 2011 Infiniti M sedan, the new QX offers a range of advanced technology systems. The QX includes both Infiniti's Lane Departure Warning (LDW) and Lane Departure Prevention (LDP) systems. The LDW and LDP systems use a small camera installed behind the windshield to detect lane markers in front of the vehicle, calculate its position relative to those lane markers and help warn the driver of a potential unintended lane departure with a visual indicator and audible buzzer. If the driver does not return the vehicle back toward the centre of the travel lane, the LDP system assists the driver with a gentle application of the brakes on the opposite side of the drift.

A new Blind Spot Warning (BSW) system is also available. It illuminates an indicator light if another vehicle is detected in the blind spot area. If the driver then activates the turn signal, the indicator flashes and an audible warning sounds.

Optional on the new Infiniti QX56 is Infiniti's advanced Intelligent Cruise Control (Full-Speed Range), which, using a combination of laser sensors, throttle and brake actuators and the Infiniti QX56's braking system, measures the distance to the vehicle ahead and automatically adjusts the Infiniti QX56's speed to maintain a pre-selected following distance.

Distance Control Assist (DCA), which intuitively prompts the driver to release the throttle and applies the brakes as needed in slowing traffic, is available as part of the Technology Package - along with Intelligent Brake Assist (IBA) with Forward Collision Warning (FCW) and front Pre-Crash Seat Belts.

"The new Infiniti QX utilizes technology, such as Distance Control Assist and Intelligent Cruise Control, as it should be - to help reduce the stress of driving without isolating the driver from the pleasure of driving," said Durward.