Infiniti has revealed the stylish and highly capable Infiniti QX30 Concept, the design vision that will inspire a new premium compact crossover.

Making its debut at the 2015 Geneva International Motor Show, the QX30 Concept cements Infiniti's ambitions to expand into the global premium compact segment, which is forecast for significant growth with the entry of younger affluent customers.

Combining the sleek lines of the coupe with the command sitting and all-wheel drive of a crossover, the QX30 Concept is just as adept at navigating high street as it is exploring weekend getaways.

"QX30 Concept foreshadows an entry in the premium compact segment that provides a stylish alternative to the existing offer in this segment," said Roland Krueger, Infiniti President and CEO.

"The vehicle embodies our conviction to give customers the freedom to go wherever they want, whenever they want - in a style that turns heads and makes a statement, in a way that expresses their individualized character."

By the end of this decade, Gen X and Gen Y will represent about 80 percent of buyers in the premium compact segment. Research among this new generation of buyers shows an increasing rejection of traditional notions toward premium cars. 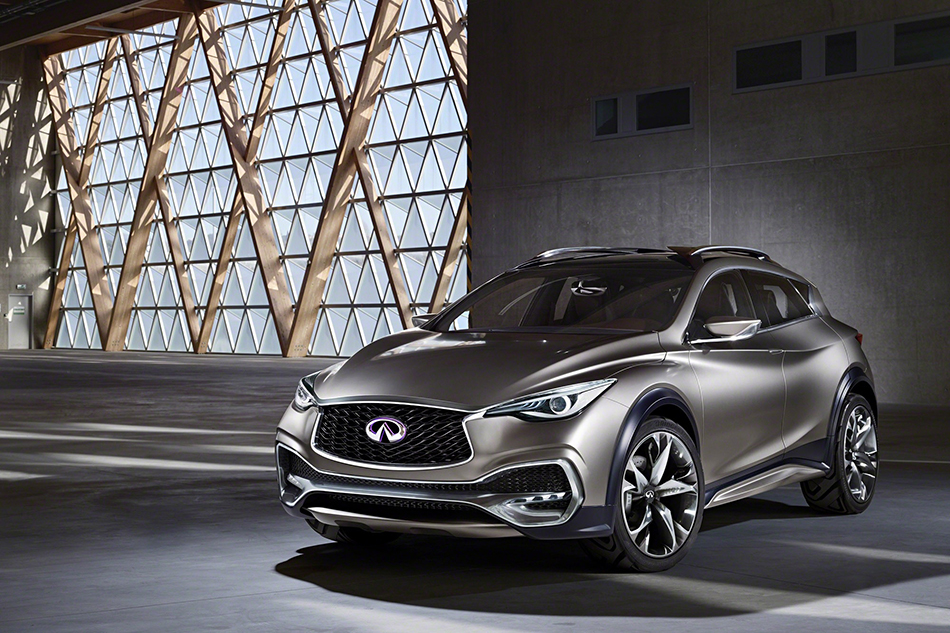 Their idea of a premium car has less to do with size or power but more to do with distinctive design and outstanding execution.

With its sharp looks and original features, the Infiniti QX30 Concept was designed by an international team to appeal to these global customers who are less likely to follow tradition. The concept's compact footprint matches their search for a product that suits their urban lifestyle. The elevated stance of the crossover also provides a higher visual perspective in city traffic and in parking manoeuvres.

Infiniti first signalled its intentions to enter the premium compact segment when it revealed the Q30 Concept in Frankfurt in 2013. The introduction of the QX30 Concept is another building block in Infiniti's aggressive strategy to grow in key global markets, particularly China and Europe while expanding its offering in established markets such as the United States.

The Infiniti QX30 Concept is the latest in a series of concept vehicles for which Infiniti has announced a definite and clear intent for production.

Infiniti continues to broaden its line-up to cover the spectrum from smaller premium vehicles, namely the Q30, to full-size crossovers such as the QX70. In fact, Infiniti has drawn on its heritage of creating successful high-performance crossovers namely the QX50 and QX70 to craft the QX30 Concept.

To complement the higher stance of the Infiniti QX30 Concept, Infiniti designers have added visual cues which instantly identify the concept as a crossover.

The body looks wider and thicker, thanks to the 21-inch wheels, large tyres, and increased blackout around the wheel opening. The unique wheel design mixes three-dimensional milled aluminium and matte rubber material for an unconventional juxtaposition.

The satin chrome front bumper is low with big side openings, giving off an air of rugged protection. The sense of stylish fortification is reinforced by the hardy kick plates under the doors and the tough-looking but sculpted skid plate in the rear.

Even the roof racks have gone beyond their functional use. Extending toward the centre line, they artistically "obstruct" the rear passenger's view through the glass roof, resulting in an inimitable perspective of the outside.

Inside, the bold and dark environment harmonises with the outdoors appeal of the exterior. All four seats have been streamlined for a suspended look, evoking a feeling of honed athleticism.

The U-shaped seat frame is partially wrapped with a layer of premium Connolly saddle leather offset by blue stitching. The contrast between the exposed and covered parts of the frame lends a three-dimensional quality to the interior.

"The QX30 Concept looks as capable as it is meant to be," said Alfonso Albaisa, Infiniti Executive Design Director. "The artistic touches we put in lift the crossover to another level from being just another utility vehicle."

The Infiniti QX30 Concept previews a family of vehicles which are designed to be matched with a wide range of powertrains, both gasoline and diesel. The array of powerplants is expected to cater to a variety of lifestyle aspirations around the world, depending on whether customers prefer a sportier or a more efficient drive.

With big wheels and thick tires, the QX30 Concept not only looks rock-solid but also feels it, greatly helping to increase driver confidence both on-road and off.

The warm and inviting interior of the QX30 Concept beckons and engages the vehicle's occupants emotionally. The slimmed-down seats now become facilitators of the shared space, instead of barriers between the driver and the passengers. And the crossover becomes a safe place for occupants to connect with one another.

Reflecting the value that customers place on connectivity, the QX30 Concept gives a glimpse into the level of technology available, features not typically found in compact cars. For example, Infiniti InTouch™ keeps the driver connected to his digital world when on the move.

"The QX30 Concept seeks to inject style in the segment," said Krueger. "It promises effortless elegance whether it's dealing with bad weather, poor road conditions or urban traffic."

Spontaneous and fluid, the QX30 Concept is Infiniti's design idea of a premium compact crossover that not only effortlessly handles anything the city or weather throws at it but also does it with style and panache.

The sloping coupe lines have been beefed up with robust facets to give the four-door concept an air of being ready to explore its neighbourhood and beyond. The high ground clearance at 192 mm (7.6 inches) gives the driver an elevated view of the surroundings and confidence to go through potholes or uneven terrain.

"We wanted the spontaneous fluidity of the QX30 Concept design to cut through the urban clutter and rigidity, reflecting its go-anywhere and spur-of-the-moment nature," said Alfonso Albaisa, Infiniti Executive Design Director.

"With its higher stance and edgier design - to match its tough capabilities - you can almost visualise how the QX30 Concept floats like a butterfly and stings like a bee."

"The Q30 Concept was like a panther, lithe and slender. We transformed the QX30 Concept into a mountain lion, strong and muscular," said Albaisa.

"The QX30 Concept design conveys a gritty sense of durability but tough doesn't mean rough. We've retained a sense of artistry throughout, even in the most functional of parts." 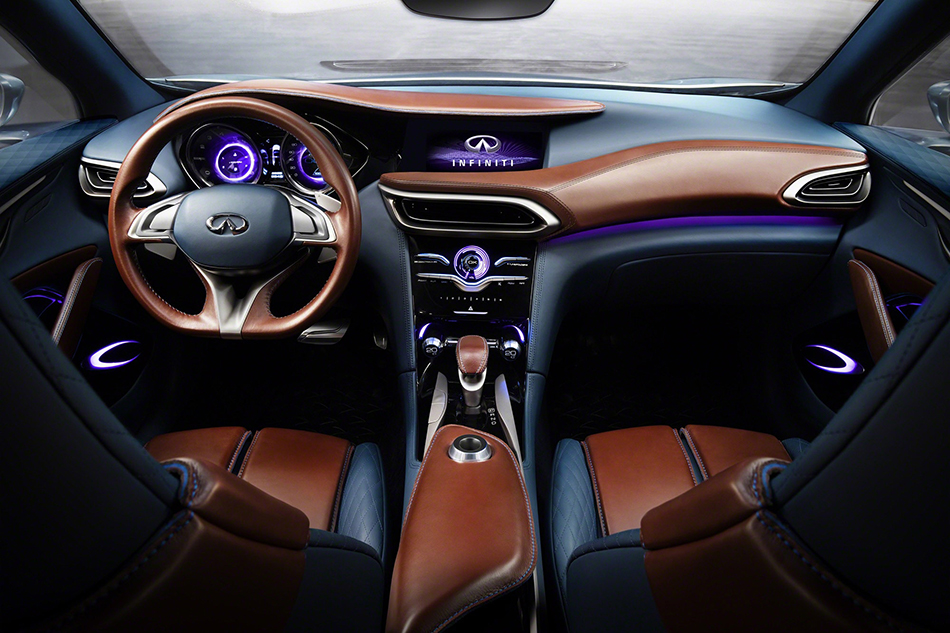 At first glance, the signature Infiniti face is unmistakable, with the meshed motif of the double arch grille framed by the accusing stare characteristic of the Infiniti headlamps.

The satin chrome of the bumper lower immediately conveys the reassurance that comes from a big protective plate. The designers dropped the bumper lower and enlarged the side openings, giving the impression that the grille hangs lower. The flaring air intakes visually intersect with the lower part of the grille, playing up the contrast between the grille and the fluid lines of the airfoil.

"You get this sense of heavy breathing from the car, as though the car is a well-honed athlete performing at a high level," explained Albaisa.

The theme of stylish protection runs throughout the entire car, from the matte carbon trim that outlines the lower profile to the milled sword-like metal insert in the kick plates under the doors.

In the rear, the designers have sculpted nuanced graphics into what would be a run-of-the-mill skid plate, reinforcing the sense of contemporary fortification.

Where rubber meets the road

The Infiniti QX30 Concept is meant to awaken one's sense of adventure and Infiniti designers achieved this by giving the crossover a sure-footed stance. Taking a wheel-oriented approach, they physically increased the ratio of tyre to the body by using 21-inch wheels and large tyres. They also increased the blackout around the wheel opening for a rock-solid look.

Juxtaposing black carbon and aluminium that echoes the body colour, the designers came up with a unique two-tone design for the wheel. The spokes are a mix of three-dimensional milled aluminium and matte rubber material, interlocking and twisting in and out in a distinctive manner.

On the surface, the spokes give the illusion of thick metal. But up close, they are aesthetically lightweight, thanks to the three-dimensional milling that allows the spokes to be undercut into thin surfaces.

"Playing the fluidity of the hard material against the rubber feeling of the soft material was key to how we used expected materials in an unexpected way," said Albaisa. "It is the unconventional execution of a conventional element that makes the QX30 Concept a style leader."

A roof with a curated view

True to its crossover nature, the QX30 Concept sports roof racks, which not only have practical uses but also frame the view through the glass roof. The roof racks extend toward the centre line, creating a captivating perspective especially for rear passengers to see through.

"Sometimes a clear view out of a rectangular window isn't all that interesting. But if there's an object between you and what you want to see, that object artistically contours your view of it," said Albaisa.

"Likewise, the roof racks become a sculpture which you see through and around. In an almost interactive way, the roof racks compose and frame your environment, inspiring and enhancing your view of the outside world."

The authentic, warm and inviting interior of the Infiniti QX30 Concept sets the tone for Infiniti's aim to emotionally engage the vehicle's occupants.

The dark environment made up of brown leather and blue accents dovetails with the outdoors appeal of the exterior, while all four seats have been streamlined for a suspended look, evoking a feeling of trained athleticism.

The designers opted for a U-shaped seat frame and partially wrapped it with a layer of premium Connolly saddle leather offset by contrast blue stitching. The exposed part of the frame encloses a see-through gap which lends a three-dimensional quality to the interior without adding visual weight. Seat bolsters are covered in quilted leather for additional comfort.

Reflecting Infiniti's philosophy that premium character begins with high-quality materials, the understated expression of personality in the QX30 Concept interior is bolstered by the creative use of genuine materials throughout.

The intricate leather weave pattern in the carpet adds texture to the cabin while the bright blue backing underneath supplements subtle touches of colour to the dominantly brown environment.

An atmosphere of precise detailing also pervades the interior, clearly evident in the tailor-wrapped steering wheel and armrest. The saddle leather trim on the armrest extends into the B-pillar, making both the armrest and the door appear longer and sleeker.

"The QX30 Concept embraces the city and is an explorer at heart," said Francois Bancon, Infiniti Vice President, Product Strategy. "Its chiselled good looks ensure that it'll always be the trendsetter whether it's roaming the neighbourhood or wandering further afield."