The pinnacle of the Jaguar sporting range - the XKR-S - is now joined by a convertible which offers the same enticing blend of abilities, while offering driver and passenger a heightened connection with their surroundings.

The XKR-S Convertible embodies all the characteristics that have always defined legendary Jaguar GTs - explosive performance, involving handling, relaxed comfort and discreet luxury - while taking Jaguar into a new performance echelon. The new XKR-S model line-up sits at the pinnacle of the XK range, which now consists of XK, XKR and XKR-S derivatives in coupe and convertible format.

The XKR-S Convertible takes the raft of performance, dynamics, design and interior upgrades already introduced to much acclaim on its coupe sibling to create Jaguar's fastest ever open-topped GT.

"There is nothing as liberating as life behind the wheel of an open-topped Jaguar and the new XKR-S Convertible takes the Jaguar GT experience to new heights." 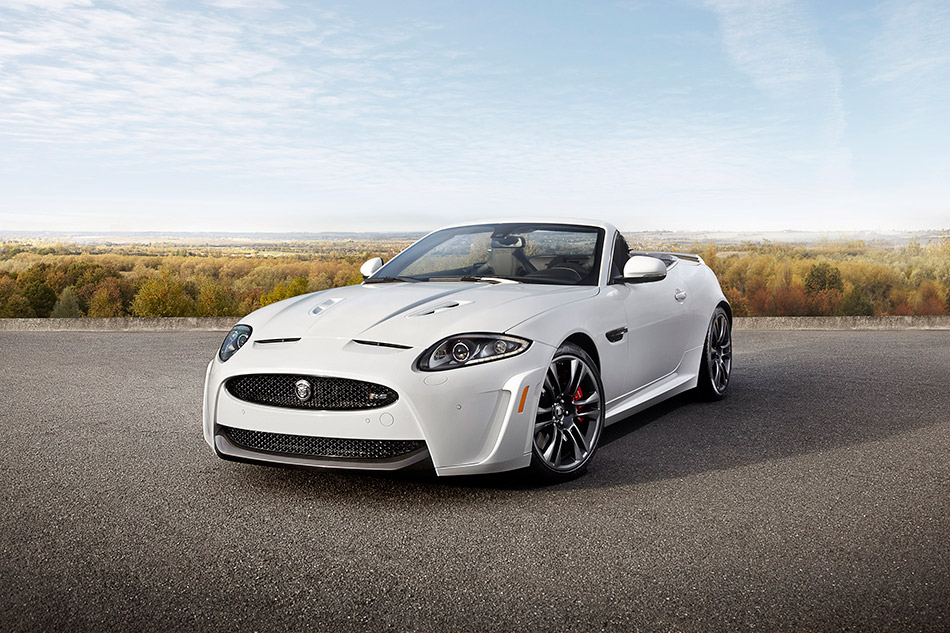 The building block for the car's explosive performance is an uprated version of the 5.0-litre supercharged AJ-V8 engine, which produces 550PS (405kW) and 502lb/ft (680Nm) of torque. These figures represent a power increase of 8 percent and torque increase of 9 percent over the Jaguar XKR. Driving the rear wheels through a six-speed automatic gearbox with Active Differential, this propels the XKR-S Convertible to 60mph in 4.2 seconds (0-100km/h in 4.4 seconds) and on to an electronically limited top speed of 186mph (300km/h).

Underpinning this potent performance is a comprehensive package of suspension upgrades which refine the XK's dynamic abilities still further, creating an intimate connection between the car, the driver and the road, enhanced still further in this open-topped GT.

The lightweight aluminium structure of the XK has huge torsional rigidity, allowing the fitment of suspension components such as a redesigned aluminium front steering knuckle and revised rear geometry, stiffer springs and dampers. Allied to lightweight forged wheels and recalibrated steering settings this has allowed Jaguar's vehicle dynamics experts to create a supremely agile, connected driving experience with no loss in refinement.

Reflecting the car's uprated dynamic abilities are interior and exterior styling changes. Externally the XKR-S Convertible is dramatically differentiated from other XK models with carefully calibrated aerodynamic aids that allow it to perform flawlessly at very high speeds.

This sense of drama is continued inside the car with Jaguar Performance seats that feature increased support for driver and passenger during high-speed cornering. The seats are finished in carbon leather and feature 16-way adjustment and heating while carbon is also used to trim the cabin and emphasise the car's assertive nature.

Extensive Computational Fluid Dynamics, wind tunnel and track work has resulted in the aerodynamic design changes applied to the XKR-S Convertible. These perform an essential function in maintaining stability in an open-topped car capable of speeds as high as 186mph (300km/h).

These aerodynamic design changes give the front of the car a dramatic and bold appearance. Vertical feature lines run down from the edges of the oval air intake into a new bumper design which incorporates a wider, lower air intake, a carbon fibre splitter and twin side nacelles. At the edges of the bumper, vertical panels channel air down the side of the car along new sills, which serve to both smooth the horizontal airflow and emphasise the 10mm reduction in ride height.

A unique rear wing with a carbon fibre inlay works in conjunction with a rear apron featuring a carbon fibre diffuser. The result is a reduction in overall lift of 26 percent and balanced aerodynamics front and rear to keep the car perfectly pinned to the road.

The exterior changes are highlighted by the application of gloss black to the exterior brightwork, complemented by the dark technical finish of the lightweight, forged 20" Vulcan design alloy wheels through which can be seen the Jaguar High Performance Brake calipers finished in either an eye-catching red or discreet gunmetal. The XKR-S Convertible is available in a range of six colours, including Polaris White and British Racing Green, a tribute to Jaguar's competition heritage. The acoustically treated hood opens and stows in just 18 seconds and has been proven at the car's maximum speed. It comes in black as standard with a further six optional colours available.

"Taking the track-oriented ethos of the XKR-S Coupe and applying it to a convertible is very exciting. There is a real spirit and thrill to driving with the roof down and in a car capable of these speeds that is going to be exaggerated to create a very dramatic and special experience."
Ian Callum, Director of Design, Jaguar Cars.

The engineering integrity of the acclaimed AJ-V8 petrol engine, now in its third generation, meant that Jaguar's engineers could derive the extra power and torque needed for the XKR-S. The advanced design of the quad-cam, all-aluminium AJ-V8 incorporates spray-guided direct injection and variable valve timing for great efficiency as well as prodigious power. The Roots-type twin-vortex supercharger nestling in the 'V' of the engine has twin intercoolers and is 20 percent more thermodynamically efficient than its predecessor.

Liberating an extra 40PS and 55Nm over and above the XKR entailed remapping the fuelling characteristics and increasing exhaust gas flow though the use of an active exhaust system.

With the roof lowered on the XKR-S Convertible the Performance Active exhaust system delivers an authentic, race-car inspired soundtrack that has been tuned to provide the driver with a thoroughly exhilarating driving experience.

With the XK model designed as a convertible from the outset, Jaguar's engineers were able to apply the changes that created the XKR-S Coupe into the open-topped GT without compromising performance, agility or refinement.

Jaguar pioneered the use of aluminium in series production cars and it is this metal's low mass and high tensile strength that gives the XKR-S such a breadth of abilities. A kerb weight of 1795kg and torsional rigidity of 16,500 Newton metres per degree provide Jaguar's engineers a solid foundation on which to apply the detail changes that create the company's most involving convertible ever.

Both front and rear suspension systems have been revised. A new aluminium steering knuckle in the front double wishbone suspension increases camber stiffness by 23 percent to provide even greater levels of steering accuracy and feedback. To increase stability and control, the Active Differential has been uprated to reduce steering sensitivity at very high speeds.

Rear damper top mounts have been stiffened over and above the changes found on the XKR-S Coupe while the rear wheel steer effect has been optimised for agility. Spring rates front and rear have been increased by 28 percent while a bespoke Adaptive Damping programme for the XKR-S maximises body control, traction and grip.

Unsprung mass has been reduced by nearly five percent through the fitment of lightweight, forged alloy wheels, which also offer greater traction and grip levels thanks to wider rear tyres that were specifically developed for use on the XKR-S and serve to increase the size of the tyre contact patch. The XKR-S convertible rides on Pirelli P-Zero tyres (255/35 ZR20 at the front and 295/30 ZR20 at the rear).

In order to allow the enthusiastic driver to enjoy the benefits of these changes, the Dynamic Stability Control system has undergone bespoke changes. In Trac DSC mode, specific traction, stability and Active Differential settings reduce intervention levels and enhance mid-corner adjustability, allowing the exhilarating handling to be safely exploited to the full.

The Jaguar High Performance Braking System fitted as standard is more than a match for the car's seductive performance. Huge brake discs - 380mm front and 376mm rear - in combination with aluminium calipers and pad area increases of 44 percent front and 31 percent rear in comparison to the XK provide confidence inspiring levels of power, stability and feel.

"Because the XK was designed as a convertible it has great structural integrity. This allowed us to apply the XKR-S coupe's sporting suspension settings to create a convertible with no compromises. Its blend of great speed, precision and dynamism is given an extra dimension with the roof down and that thrilling exhaust soundtrack."
Mike Cross, Chief Engineer, Vehicle Integrity

With the convertible hood stowed away, the interior of the XKR-S will be subject to as many envious glances as the exterior, with both highlighting the car's high performance intent.

Superb tactile interfaces are provided by the multifunction three-spoke leather-wrapped steering wheel and Jaguar-embossed bright stainless steel pedals. Other premium surfaces include soft-feel paint for the switches and a gloss black centre console. An exclusive dark aluminium finish is available as standard with an optional Piano Black finish also available.