Kia has announced details of a comprehensive upgrade to its increasingly popular Kia cee'd, a model that has provided the foundation for Kia's continuing success in Europe over recent years.

Kia's European designers have evolved the interior and exterior styling of the current cee'd into an exciting new look, with the powertrain team developing a wider range of engines and transmissions. The improvements include Kia's all-new three-cylinder 1.0-litre ecoTurbo engine, as well as a range of new safety, comfort and convenience upgrades. The changes apply to every model in the cee'd range, which now incorporates the five-door cee'd hatchback, Sportswagon and three-door pro_cee'd. 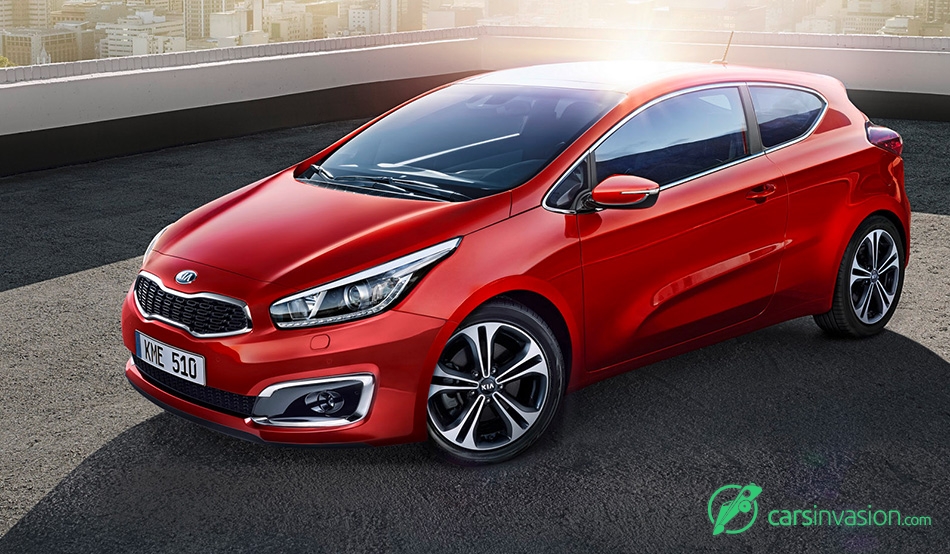 The modifications applied to the cee'd range also include a range of visual and dynamic improvements to the high-powered cee'd GT and pro_cee'd GT models. Already among the best-looking cars in the C-segment 'hot hatch' segment, these changes will further strengthen the GT models' appeal to buyers in this more emotive corner of the market.

The upgraded model will come with a new 'GT Line' specification, offering buyers the sporty looks and dynamics of the GT models and the versatility of the conventional cee'd model family. The GT Line specification is available on all three cee'd body types - five door cee'd, cee'd Sportswagon and three-door pro_cee'd.

The upgraded Kia cee'd inherits the bold, sleek styling of the current model, with a series of visual modifications to modernise the car's appearance.

At the front, the cee'd continues the look that has proven so popular with European buyers, retaining Kia's hallmark 'tiger-nose' grille, sleek wraparound headlamps and integrated fog lamps. Changes to the 'face' of the cee'd include a more angular and wider bumper, with chrome trim around the fog lamps, and a new oval-shaped grille mesh echoing many of the shapes and design forms on the front of the car.

A similar change has been made to the rear of the cee'd, with reshaped bumpers and sporty-looking reflectors adding greater volume and strength to the car's appearance. LED rear lamps complete the rear of the car, adding a higher level of refinement while updating the cee'd's night-time light signature. Stylish new 16- and 17-inch alloy wheel designs are also now available across the range.

Subtle styling upgrades to the interior and improved NVH

The high quality cabin in the Kia cee'd has received a range of minor styling upgrades to build on the simple elegance of the interior design. The basic form of the cabin remains unchanged, but a number of subtle enhancements bring a more modern look and feel to the interior. A new optional colour pack further adds to the cee'd's appeal.

The asymmetric, driver-focused dashboard receives a flash of chrome around the instrument binnacle, driver-side and central air vents and around the upper edge of the instrument panel. The central fascia panel is now finished in a high quality, anti-scratch gloss black for a more premium look. Other chrome highlights have also been added to the cabin, in particular around the base of the gear-stick, on door handles, and to the temperature control dials on the dashboard, depending on trim level.

For diesel variants, the upgraded interior of the cee'd offers improved noise, vibration and harshness characteristics. Additional sound-absorbing materials have been adopted for the carpet and ventilation system, while twice as much anti-vibration material has been added to the dashboard panel to cut engine vibrations intruding on the calm of the cabin. All diesel engines have also been fitted with sound-absorbing material to the engine block, oil pan and diesel particulate filter.

The upgraded cee'd offers a wider choice of powertrains than before, with all engines now compliant with the Euro 6 emissions standard.

For the launch of the 2016 cee'd, Kia is introducing its all-new 1.0-litre ecoTurbo engine. This new downsized, three-cylinder power unit has been engineered to improve fuel consumption and emissions, while offering strong, willing performance and immediate responses to driver input. This is the first of Kia's upcoming range of downsized engines to make its debut in Europe, and will be available with a choice of two power outputs. In its basic state, the new engine produces 100 ps (98bhp) and 172 Nm torque, while the higher powered version produces 120 ps (118bhp) and the same 172 Nm torque. The maximum engine torque is available from 1,500 to 4,000 rpm, making it an incredibly flexible engine under all driving conditions. Pending homologation later this year, both 100 ps and 120 ps are expected to deliver the lowest CO2 emissions of any gasoline-engined cee'd to date.

The diesel cee'd continues to be a popular choice for European buyers, and the 1.6-litre CRDi diesel engine has also been upgraded for its application in the new model. A new high-pressure injection system and continuously-controlled variable oil pump reduce friction losses in the engine, with the lower powered 110 ps version available across both the standard cee'd and new GT Line range. CO2 emissions fall to 102 g/km, or just 94 g/km when fitted with Kia ISG (Idle Stop/Go).

Available with both the enhanced cee'd range and the new GT Line variant, the higher powered 1.6 CRDi engine now produces 136 ps (up from 128 ps), and 285 Nm torque (improved from 265 Nm). With the small increase in performance, the engine's full torque is now available from just 1,500 (down from 1,900, when equipped with a manual transmission), resulting in more effortless acceleration under all conditions.

The Kia cee'd will continue to be offered with the 128 ps 1.6-litre GDI (petrol) and 100 ps 1.4-litre MPI (multi-point injection) gasoline engines, as well as the popular 1.4-litre CRDi diesel engine, all of which now also meet the Euro 6 emissions standard.

The upgraded cee'd features a second new technology debut for Kia, with the arrival of the brand's all-new seven-speed double-clutch transmission (DCT), available exclusively on models equipped with the higher powered 136 ps 1.6-litre CRDi diesel engine. Kia's new DCT is capable of handling the higher torque outputs of the modified engine fitted to the upgraded cee'd, with a higher capacity than the six-speed torque-converter automatic transmission it replaces.

Like the new 1.0-litre ecoTurbo power unit, Kia's new DCT has also been developed in-house and has been engineered with low fuel consumption and a sporty driving feel when in manual mode, and with comfort and smoothness when left in automatic mode.

Engineers have made a number of modifications to the suspension and chassis of the upgraded cee'd in order to improve ride comfort and handling.

The principal enhancement to the upgraded cee'd is the addition of a new torque vectoring system, which reduces understeer by partially applying the brake to the inner wheel under cornering. The motor-driven power steering system now results in more linear and predictable steering inputs, while changes to front wheel geometry have improved on-centre steering feel. Finally, new stoppers on the rear strut mount insulators and new outer ball joint on the rear stabiliser bar help to improve ride comfort on poor surfaces by minimising vibrations through the suspension.

The NVH characteristics of the suspension in the upgraded cee'd have also been improved slightly, with the adoption of a hollow stabiliser bar, replacing the previous solid stabiliser, to reduce road noise.

Kia development teams have added a range of new comfort, convenience and safety features to further improve the modern, high-tech appeal of the Kia cee'd.

Safety is a priority for Kia, and the popular cee'd is now available with an optional Speed Limit Information Function (SLIF), which uses a camera to identify speed limit signs and display them beside the speedometer and on the navigation screen. Blind Spot Detection (BSD) and Rear Cross Traffic Alert (RCTA) are also available as options, using sensors to monitor the side and rear of the cee'd for other vehicles in the driver's blind spots and give the driver a visual or audible alert. 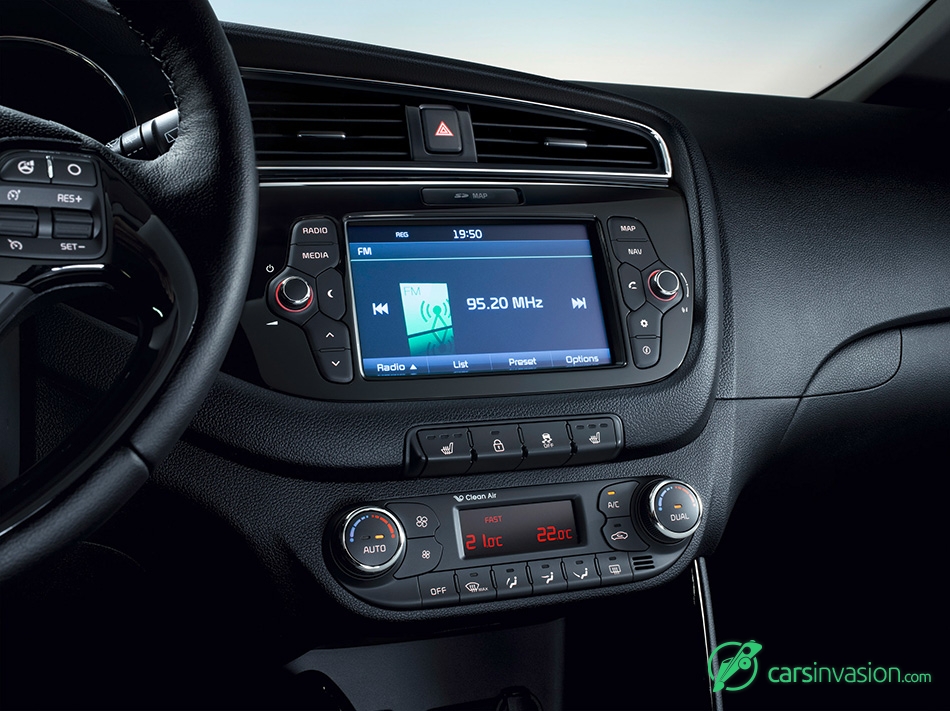 Drivers can enjoy easier parking with the 2016 cee'd, with an upgraded Smart Parking Assist System (SPAS), depending on market. SPAS uses side-mounted ultrasonic sensors and front and rear parking sensors, as well as the electric power steering system, to identify a suitable parking space and automatically steer the car into the space. In the latest cee'd, the system can now steer the car into perpendicular spaces, in addition to parallel parking. The parallel exit function allows the cee'd to steer itself out of tight road-side spaces.

The upgraded cee'd also features Kia's latest audio-visual navigation (AVN) system for a more modern appearance on the cee'd's 7.0-inch central fascia display. The AVN system also supports the addition of DAB digital radio, which is available across a number of European markets.

A new addition to the cee'd is a wide range of multimedia information services, Kia Connected Services. Provided by TomTom, the new connectivity features include live traffic updates, speed camera locations and alerts, local search and weather forecasts. Kia Connected Services will be introduced to the cee'd range in line with the launch of the new GT Line specification, due across Europe in Q4 2015.

The high-powered cee'd GT and pro_cee'd GT have been upgraded with modifications to its powertrain and dynamics. These changes ensure the GT remains among the most compelling - and best-looking - cars in the C-segment 'hot hatch' class.

For the exterior, GT models retain much of the visual aggression that differentiates them from the standard cee'd range, including the stylish 'ice-cube' daytime running lights and sporty bodywork. The 2016 cee'd GT is now also available with a new 18-inch wheel design.

On the inside, cee'd GT and pro_cee'd GT models are now fitted with a newly-designed flat-bottomed steering wheel with a subtle GT logo and concave central design, while the black engine start-stop button from the standard cee'd is replaced with an aluminium button. Chrome accents have also been added to in-door power window switches. Combined with the car's standard RECARO suede bucket seats, these enhancements make the car stand out even further from other models in the range.

A new electronic sound generator, fitted exclusively to GT models and activated when drivers press the 'GT Mode' button on the steering wheel. Effectively synthesising the 1.6-litre T-GDI's fast-revving engine note into the cabin, the sound generator adds a new element to the driving experience and brings the driver closer to the car's higher level of performance. With GT Mode switched off, the sound generator produces a quiet and moderate engine note.

The high-powered 1.6-litre T-GDI engine found in the cee'd GT and pro_cee'd GT receives a new turbocharger system. With increased air pressure serving to boost low-end torque and engine response, acceleration from 0-100 kph is improved by 0.1 to 7.6 seconds. Drivers will also enjoy greater in-gear acceleration as a result of the new turbocharger. The 1.6-litre T-GDI produces 204 ps and 265 Nm, with CO2 emissions reduced slightly to 170 g/km.

As well as the addition of torque vectoring and NVH improvements to the standard car, Kia engineers have further upgraded the dynamics of the cee'd GT. New optional enlarged front disc brakes, increased in size from 300 mm to 320 mm, result in higher heat capacity and improved resistance to brake fade. The 100-0 kph stopping distance in the upgraded cee'd GT has been reduced from 36.4 metres to 35.0 metres.

The upgraded Kia cee'd will be available from dealers across Europe from July 2015, offering the company's unique 7-Year, 100,000 mile warranty as standard.

Designed and engineered in Europe before launching originally in December 2006, the Kia cee'd model family is manufactured at Kia's production facility in Zilina, Slovakia, and remains one of the brand's bestselling models, with more than 75,000 sold across Europe in 2014.

In May 2015, Kia produced its 1,000,000th cee'd, a major milestone since its introduction to the European market nine years ago.