A bespoke carbon composite with nomex and aluminium core chassis with carbon composite panels contribute to a super light weight of just 560kg resulting in a phenomenal power to weight ratio of nearly 1000 hp per tonne.

Unlike a Formula One car however, an army of technicians and mechanics is not required to start the engine and keep the car running. The start button is all the driver needs to press to get going.

Purchasers of the Lotus 125 will be able to chose from a stylization of a classic Lotus livery, the Exos (explained below) concept design, or as an option, request their own, bespoke livery. 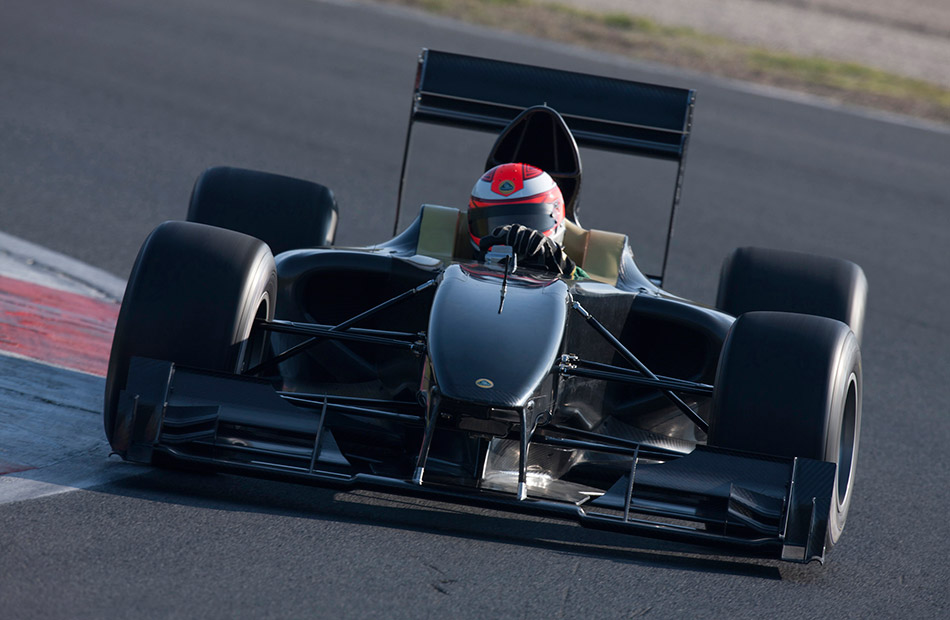 The Exos* Experience by Lotus

The Exos Experience, initiated and operated by Lotus Motorsport, is an elite club. A club in which the limited number of Lotus 125 owner drivers can refine their driving skills and challenge themselves in Formula 1™ inspired technology combined with expert one-to-one advice from former Grand Prix drivers and trainers.

The ‘Exos Experience by Lotus' is a new concept for these most exclusive owners and members to improve their race craft and engineering prowess, learn how to set-up a car working with a race engineer, focus on mental and physical fitness and enjoy a driving experience quite literally out-of-this-world. A team of engineers, aerodynamicists, tyre specialists and experts from every field have the specific aim of delivering the optimum performance vehicle. But it is not just the performance of the vehicle which will be optimised, the driver will be brought up to a high level through an F1 level fitness programme including nutrition, strength and fitness training and through driver training from former Lotus F1 drivers to raise the customers' skill levels to F1 standard.

A member of the Exos Experience will be offered an elite concierge service for track based activity including assisting with travel arrangements and transfers to the track enabling the owner to begin their experience as smoothly as possible. The dedicated Lotus Exos concierge will act as a central point of contact for all arrangements and communications covering all official documentation and special requests.

Just as Formula 1™ drivers must prove themselves from week-to-week on Grand Prix tracks around the world, the ‘Exos Experience by Lotus' will be held at European circuits with first class facilities, like the famous Paul Ricard Circuit in the south of France, and the Autуdromo do Algarve, Portimao in Portugal. Owners will learn to drive in conditions similar to the most demanding race proven circuits in motorsport. With Lotus' sophisticated data-gathering systems they'll also be able to compare lap times with past and present heroes of the sport and debate braking distances - with braking zones of less than 100m, one of the difficult aspects to master - and overlay racing lines, entry and exit speeds and terminal velocity.

Each event will be structured to enable the driver to hone their skills allowing them to develop as a more complete driver and experience a near facsimile of a Grand Prix weekend. They will be advised on all aspects of car and driver performance to ensure that they benefit fully from the ownership of a Lotus 125. Lotus' team of driver coaches, technicians and physiotherapists will be at their service throughout the event: helping to improve race-craft, technical understanding and preparation for the physical strains of driving. The ‘Exos Experience by Lotus', will provide a unique opportunity to extend driving skills in a safe but challenging atmosphere.

*Exos = Exosphere - a reference to the earth's outer atmosphere - the exosphere - where space begins and G-forces lessen where atoms are on ballistic trajectories and the lightest gases including atomic oxygen reside.