The CCX is the latest iteration of the Koenigsegg CC family. The CCX is in many aspects a new car since it has been re-engineered to comply with the US regulation and market demands. Still, it has been a key issue for the Koenigsegg Team to keep the distinctive and record breaking CC shape. We believe it is important to avoid trends and instead hone the aerodynamic shape of the CC range for the future, only enhancing its unique look and appearance with tighter lines and a more aggressive stance. We also believe in continuity. A new Koenigsegg shall show a clear lineage from its predecessor and shall not follow any other design trends – but enhance its already proven concept and shape to perfection.

CCX stands for Competition Coupe X. The CCX commemorates the 10th anniversary of the completion and test drive of the first CC maiden prototype, which rolled out from the R&D Department in 1996. 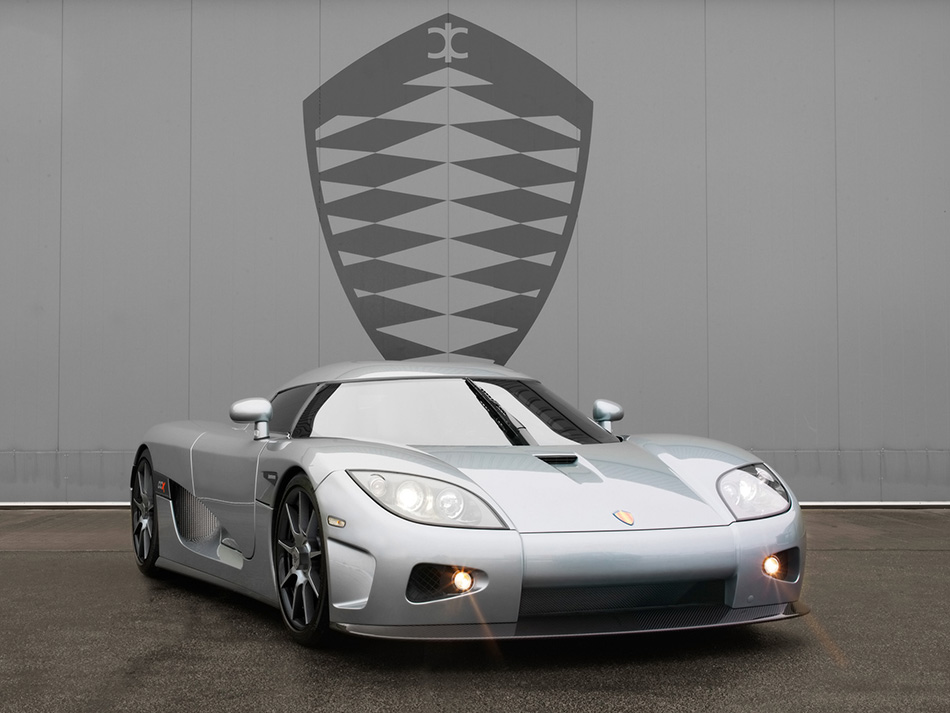 The CCX features a completely new set of body and interior parts. The new body incorporates a new front bumper design, engineered to function well in the stringent 2.5 mph bumper test, including enhanced brake cooling, fog lamps and US side position lights. The front lamps have been slightly redesigned to suit the new bumper line.

There is a new scoop on the front bonnet acting as a larger fresh air-intake for the occupants and new air vents have been added behind the front wheels in order to further evacuate air from the cockpit. The frontal shape revisions now allow for effective track use options to be added. The side rocker panels feature side skirts in order to further enhance downforce by increasing underbody area. The new exterior of the car has been created using the industry leading Icem Surf CAD software, guaranteeing a perfect fit and finish as well as optimal highlights.

The car is 88 mm longer in order to comply with the US rear impact regulations and in order to free up space around the rear muffler. The rear clamshell now features a glass window over the new CCX engine, clearly showing off the bespoke and unique Koenigsegg Block casting. The mufflers have received improved cooling, by incorporating grill vents above in the clamshell. The number plate area is now adapted to suit both US and Euro size number plates.
Space

There is a further 50 mm in headroom, making the CCX the most spacious super car on the market, truly considering the taller driver's needs. Koenigsegg believes to have found a niche by enabling really tall drivers to fit well inside the car, still with its highest point only 1120mm above the tarmac.

In corporation with Sparco, and Koenigsegg test driver Loris Bicocchi, Koenigsegg has developed a new seat design for the CCX. The structures of the seat are still carbon fibre, but now feature fully padded front surface and a tilting backrest. The striking and very comfortable Tempur padded CCR seats can still be fitted in the CCX on special order.

The optional ceramic 382 mm front discs are coupled to 8 – piston callipers and in the rear the 362 mm size is retained with 6 piston callipers. The optional industry first carbon fibre wheels save another 3 kg per wheel compared to the already lightweight magnesium wheels that come as standard. The ceramic discs save another 2 kg per wheel, giving the Koenigsegg CCX lower unsprung weight than any other super car.

Between the raised speedster humps there is a new type of vortex generator originally conceived and patented by Torbjцrn Gustavsson at Vortaflow and implemented as a Ram Air engine booster by Christian Koenigsegg on the CCX. Due to the fact that there is a fresh air engine intake right below the rear window, the vortex generator redirects the air directly into the air intake and thereby creating a positive pressure in the air box. To normally obtain this phenomenon in a mid engine car a roof scoop is required, increasing frontal area. In the case of the CCX, the small frontal area can still be kept and reward visibility is unaffected, even though it has now got a true ram air intake over its mid mounted engine.

The CCX now features wholly digital, intelligent fuse and relay unit. This means that there are not physical fuses or relays as such. The unit is programmable and is can-bus connected to a display unit which sends crucial information to the driver. The main advantages of this system are its reliability, light weight, small physical size, programmability and direct information to the driver. The system is prepared for future upgrades and functions.

The Engine in the CCX retains the incredible performance and power of the CCR engine, while running on US 91 octane fuel and complying with California emission regulations. In order to reach this challenging goal, extensive rework had to be done to emission related items, such as new cylinder heads with larger valve area and more optimally flowing cylinder head ports. Dual smaller injectors per cylinder were integrated, as well as new camshafts, a new carbonfiber individual runner intake plenum, a new engine management system, updated fuel and EVAP system. New exhaust system where the catalytic converters are moved closer to the engine for earlier light-off time. A returnless fuel system has also been implemented with pumps integrated into the new fuel tank. All in all, a heavy rework in order to retain the unique performance of the CCR engine and at the same time comply with the strictest emission regulations in the world.

The new and cleaner CCX engine also incorporates the first engine block design that is specifically created and cast for Koenigsegg, with the Koenigsegg shield embossed in the casting on both left and right side of the engine block. This new block design is an all aluminium construction made out of 356 aluminium with a T7 heat treat that has undergone a High Intensity Pressure process in order to further enhance block integrity as well as a cylinder bore chill during casting. The new block reaffirms the future development of Koenigsegg engines and makes Koenigsegg stand out among low volume super car manufacturers, due to the fact that Koenigsegg engineer the engine completely in house in combination with the fact that it is also built, assembled, and dyno tested in the Koenigsegg production plant. The Koenigsegg Engineers also incorporated the most powerful internal piston coolers in the industry – bringing down the piston temperature by as much as 80% more than competing systems, which was a must in order to run high cylinder pressure with 91 octane fuel.