While the god Cronos lead the twelve Titans, MANSORY has created the new master of eight and twelve cylinders in lavish carbon handiwork. The creation, based on the Mercedes-Benz G 63 AMG and G 65 AMG model, consequently bears the name of GRONOS.
In contrast to the Greek mythological figure the GRONOS enters into a permanent reign, which cannot even be ended from Olympus. For this MANSORY has completely reworked the eight-cylinder bi-turbo engine of the AMG and installed genuine motor racing components. Engine pistons, connecting rods, rod bearings, crankshaft, crank, the cylinder head and many other parts now meet the high demands of Kourosh Mansory. Together with the newly designed exhaust system
from the manifold right up to the double stainless steel tailpipes, which poke out before the rear wheels, resulting in superior performance characteristics. Instead of developing 544 hp (400 kW) the GRONOS reaches an impressive 840 hp (618 kW), while the maximum torque is raised to an electronically-limited 1000 Nm. An increase in performance for the 12 cylinder G 65 AMG is already in the experimental stage. With this efficiency the MANSORY GRONOS already surpasses many motor racers but the parallels reach even further. Where the use of carbon fibre is necessary in the world of motor racing, this is a matter of course for MANSORY. In the in-house autoclaves in Brand, near Bayreuth in Bavaria, Germany, the company finishes the ultra-light material itself and thus ensuring the consistently first-class quality of material and workmanship.
The GRONOS bears completely newly designed bodywork made from ultra-light carbon, its stiffness handles all the demands of terrain, road and track. On the front spoiler with the LED daytime running lights and the front fairing that lays over it, the material with the characteristic grain on the styling fins in visible carbon fibre meets the light of day. Even the lining of the headlights displays material typical for MANSORY.
The main headlights are also the centrepiece of the new MANSORY Lightelements design, which give the GRONOS a completely self-contained look. In addition to the elegant design of the lights this also includes clever solutions like the hidden
indicators. These no longer squat clumsily on the fenders, but are now embedded in the nine pinhead-sized recesses underneath the headlights.
As on the entire vehicle multiple layers of paint in Magic Yellow colour cover the bonnet, while still sometimes allowing a glimpse of the extravagant use of carbon fibre. The roof, the mirror housings and the decorative trims on the sides of the
GRONOS can shine in their pure carbon design even without additional colour.
The new width, among others, is responsible for the self-assured appearance of GRONOS. Thanks to the wider wings and the side skirts the G model has grown by 20 mm in width. The wheel arches which have been stretched to the side are filled
by forged wheels, which celebrate their world premier in the GRONOS. The rims with the ten twin spokes measure 23 inches, which are coated in ultra-high-performance 305/30/23 Vredestein Ultrac Vorti tyres. At the back the rear spoiler in a new design and of course the spare wheel cover made of carbon fibre round off the transformation of the GRONOS. 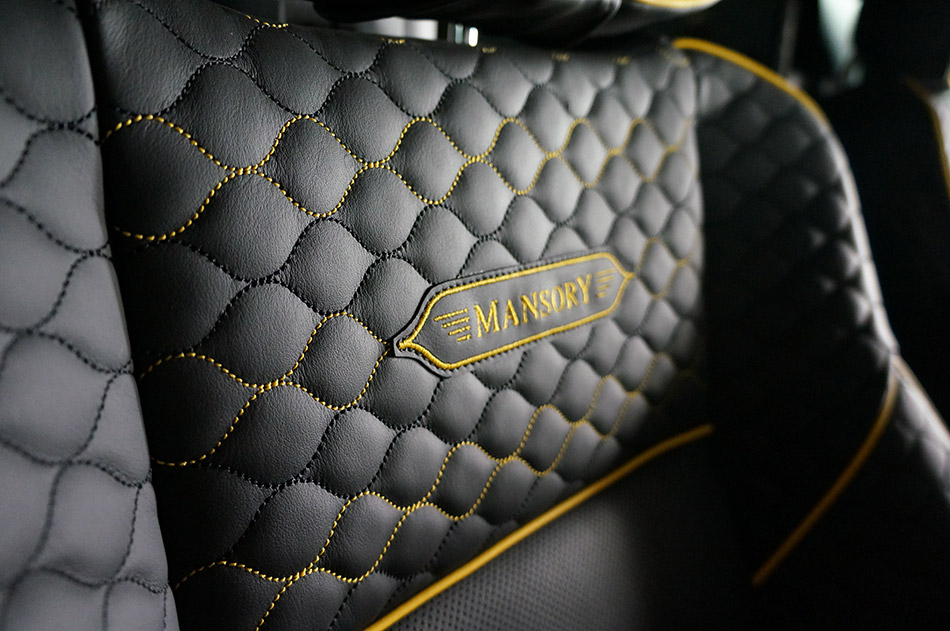 The continuation of these can be found in the interior. Both the dashboard as well as the entire area of the centre console has been completely re-designed. The in-house upholstery has, in collaboration with the design department,  implemented a carbon design with coloured elements, which extends the concept of the exterior into the interior. The team has once again shown that at MANSORY only the best pristine leather of the highest grade, error-free fine woods, and of course, only perfectly produced carbon fibre will be worked with.
Source: MANSORY
Gallery: MANSORY GRONOS Mercedes-Benz G 63 AMG (2013)