From mid November 2009 the new smart fortwo electric drive will roll off the production line at the smart factory in Hambach, France. Unlike its predecessor, the electrically driven smart fortwo of the second generation is fitted with an innovative and highly efficient lithium-ion battery. It is housed in a space-saving position between the axles, which means that space is not compromised in any way in the intelligent two-seater vehicle. A 30 kW electric motor is fitted at the rear.

This provides for good acceleration and high agility with 120 Newton metres of torque that are immediately available. The smart fortwo electric drive can be charged at any normal household socket. In Germany, a full battery charge costs approximately two euros and is sufficient for a range of around 135 kilometres – more than enough for city traffic. smart has made electric drive a practical alternative for zero-emission mobility in urban areas. The new smart fortwo electric drive is initially being leased to customers in Berlin and other cities in Europe and the USA who will subject the environmentally friendly trendsetter to intensive real-world testing in tough everyday conditions. From 2012 it will be available to anyone interested. 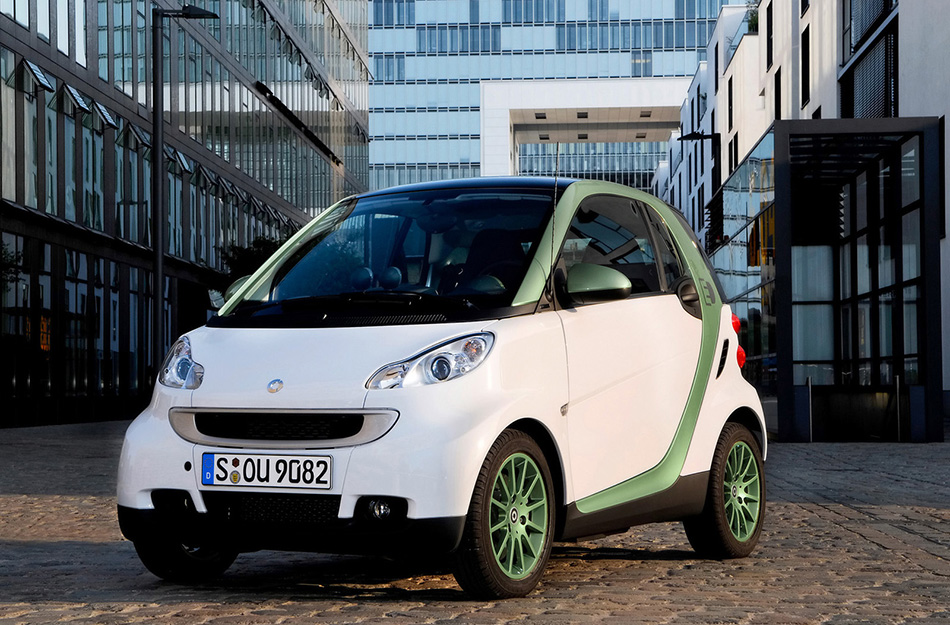 Environmental friendliness and contemporary functionality have been defining features of the smart fortwo ever since it was launched more than ten years ago. Since then its innovative concept has combined sustainable, forward-looking technologies with individual urban mobility. With a length of just over two and a half metres the extremely compact vehicle can also park perpendicular to the flow of traffic. In addition, the space-saving and environmentally friendly two-seater currently has the lowest fleet consumption and brings its occupants to their destination comfortably and safely. Its design is fresh, youthful, modern and yet sophisticated and has made it an automotive lifestyle icon which shows that mobility, responsibility to the environment and joie de vivre are compatible with one another. The smart fortwo has established a class of its own.

The new smart fortwo electric drive from the popular brand that will roll off the production line from mid November 2009 is a logical continuation of a very ambitious goal: the production of a well-engineered, attractive city car that has no local exhaust gas emissions i.e. a zero emission vehicle. smart started emission-free driving in the tough everyday conditions of city traffic in 2007 in London. Since then 100 smart fortwo electric drives of the first generation have been in practical customer operation. The feedback from the UKcapital has been very positive and confirms the high degree of maturity of this vehicle concept.

In 2008 smart presented the second generation smart fortwo electric drive, a more advanced electric drive with an innovative lithium-ion battery. Lithium-ion technology has decisive advantages over other types of batteries including higher performance, shorter charging times, a long life and high reliability. Marc Langenbrinck, responsible for brand management at smart, says: "The second generation smart fortwo electric drive is based on a successful and accepted vehicle concept with character and inherent environmentally friendly characteristics. Its innovative electric battery drive makes it the perfect car for the city: it is agile, economical and climate-friendly. Motoring with zero local emissions in an urban environment has become a reality. This equates to driving fun with a clear conscience."

Electric drive taken into account in the very first concept

Electric drives have been part of the smart concept right from the start. The later integration of the components needed for electric drive was planned at a very early stage. For example, there is space for the battery in the underfloor between the axles where the tank is located in other smart models . The electric drive module does not limit the space available in the smart fortwo electric drive in any way; there is just as much interior and luggage compartment space as in a smart fortwo with a combustion engine. 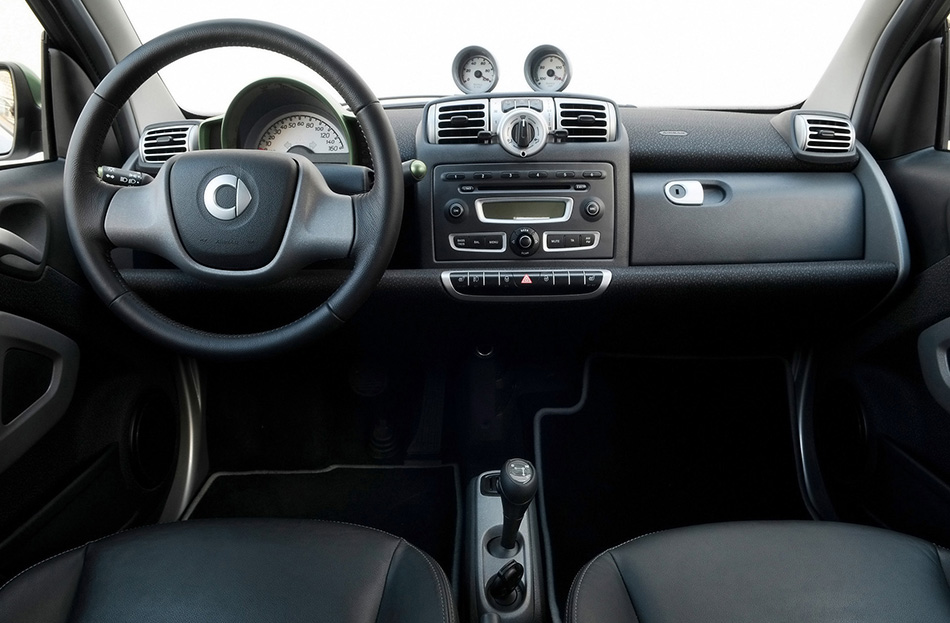 A 30 kW magneto-electric motor is installed at the rear of the new smart fortwo electric drive and reacts immediately and without delay. Powerful torque of 120 Newtonmetres is immediately available. This results in a surprising amount of power when pulling away. The smart fortwo electric drive accelerates from 0 - 60 km/h in 6.5 seconds – just as quickly as a petrol model which it initially leaves behind it. Its maximum speed has been deliberately limited to 100 km/h, a suitable speed for the city. Thanks to the power characteristic of the electric motor, the smart fortwo electric drive needs just one single fixed gear ratio. There is no need for any gear changing – a major advantage in dense city traffic. To reverse, the engine's direction of rotation changes.

The second generation smart fortwo electric drive is powered by a lithium-ion battery from Tesla Motors Inc. with capacity of 14 kWh. It is simple to charge at any fused 220 Volt socket.
A fully charged battery is sufficient for up to 135 kilometres of driving fun (NEDC). This range is more than enough for city traffic as studies have shown that cars drive an average of 30 - 40 kilometres per day in towns and cities. For this, the vehicle only needs to be charged for three hours. Plugging the car in overnight will fully recharge the battery.

Special electronics ensure that all is well with the battery. The electronics also monitor the charging process and control the capacity display.The vehicle's power electronics supply the electrical system with electric current from the battery via a DC/DC converter. In addition, they also control the heating and air conditioning, for example, to minimise the strain on the battery. Clever drivers can air condition their smart fortwo electric drive in advance as long as their vehicle is being charged at home - the long-standing dream of stationary cooling becomes a reality! No other car offers this comfortable option.
The new second generation smart fortwo electric drive is based on the smart fortwo coupй/cabrio passion. As well as air conditioning with automatic temperature control all the equipment features of the popular passion equipment line are included. In addition to the battery indicator, an ammeter shows the consumption and the recuperated energy.

Based on German electricity prices it costs approximately two euros to drive the smart fortwo electric drive for 100 kilometres (even cheaper with off-peak electricity). This is less than the price of two litres of petrol. Electric power is much cheaper in lots of countries. The maintenance costs are considerably lower than those of a smart with a combustion engine as the battery, motor and other components of the electric drive are maintenance-free.

In addition to the low running costs, there are further cost advantages in lots of countries and cities. For example, drivers of a smart fortwo electric drive are entitled to national subsidies, tax advantages or exemption from local toll charges such as the city centre congestion charge in London.

From the end of 2009 the smart fortwo electric drive will be delivered to selected leasing customers. Leases will be offered for a period of four years and 60,000 kilometres. The first vehicles are destined for the "e-mobility Berlin" project . Here, in cooperation with the energy provider RWE and with the support of the German government and the city of Berlin Daimleris creating the conditions for running battery-driven vehicles with no local emissions.This includes setting up a network of electricity charging stations that enable intelligent communication between electric vehicles and the power network so that the battery can be charged when electricity is cheapest.

Further vehicles of the new generation smart fortwo electric drive will take to the roads of Hamburg, Paris, Rome, Milan, Pisa, Madridand they will also be deployed in further projects in Europe. Some of the models will also go to cities in the USA.

There is already a very lively demand for the smart fortwo electric drive, and from 2012 it will be produced in large volumes as a normal part of the smart range and sold via the smart dealer network. This underlines the pioneering role of the car brand on the way to attractive individual mobility with zero local emissions in cities and urban population centres.