This version of Mazda's latest model has a dynamic and elegant form that was designed to capture new customers in the rapidly growing Chinese B-car segment. The all-new Mazda2 sedan is produced by Changan Ford Mazda Automobile Co., Ltd. at its Nanjing plant, and will go on sale in the first half of 2008 through the Changan Mazda Motor Sales Company's network.

Noriaki Yamada, President and COO of Mazda Motor (China) Co., Ltd. said, "By introducing the four-door sedan and five-door hatchback to the B-car segment in China, we will have completed our product launches in the B, C and CD segments, which represent the three major Chinese vehicle classes. The new models will greatly strengthen Mazda's product lineup in China." 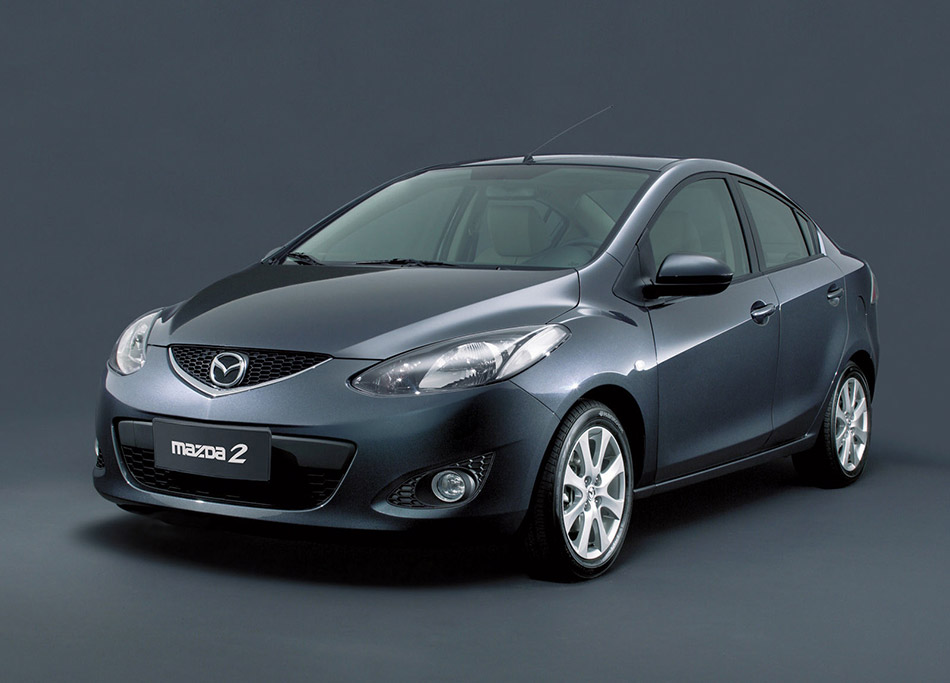 Mazda's Senior Managing Executive Officer, Kiyoshi Ozaki, spoke about Mazda's global growth and China business at the press conference. "In fiscal year 2007, we expect to achieve our seventh consecutive year of profit growth and fourth straight year of record profit. Going forward, we will aspire to maintain our current growth by raising our brand value and enhancing our business efficiencies under our new mid-term Mazda Advancement Plan and our long-term vision for technology development, Sustainable Zoom-Zoom. Achieving our mid-term target for China of '300,000 units of production and sales in 2010' will be a key factor in our plans," he said.

This year, Mazda completed the consolidation of its production, sales and product foundations, which it has been building in order to achieve its mid-term objectives.

President and CEO of Mazda Motor (China) Co., Ltd., Satoshi Tachikake: "We have set up a production structure that comprises three facilities: the Changan Ford Mazda Automobile Nanjing plant, which was completed in September and features Mazda's latest production and machining technologies, the Changan Ford Mazda Automobile plant in Chongqing, and FAW Car Company in Changchun."

Noriaki Yamada, who is in charge of China sales, added, "The newly established Mazda Motor (China) Beijing Office will function as the representative of Mazda Motor Corporation. It will establish a reliable sales network by developing a unified brand strategy for the two sales channels and policies that will always benefit the customer. Mazda's core products will be progressively introduced through the two sales channels to strengthen our product lineup. We intend to continue expanding our sales network, from the current 104 dealerships to a total of 160 for both channels by January 2008, and establish over 300 dealers by 2010."

At the 2007 Guangzhou Motor Show, Mazda will promote the Zoom-Zoom brand promise by displaying twelve vehicles from five model lines, which represent Mazda's core products that are scheduled for launch.

The display will include the Mazda5 and Mazda3 5-door hatchback, which are due to be introduced through FMSC. The Mazda5 is a stylish global minivan that will go on sale in China from December 2007. The Mazda3 5-door hatchback is one of Mazda's core models and supports global sales mainly in Europe, Japan and Asia. It is due to commence sales in China during the first half of 2008.

The all-new Mazda 2 five-door hatchback and sedan models that will be launched through the new CMSC channel will also be showcased. The all-new Mazda 2 five-door hatchback is the first of Mazda's evolved Zoom-Zoom new generation products. It has received excellent reviews, including the prestigious 2008 RJC Car of the Year award in Japan, since its global rollout commenced this summer. Production began at Changan Ford Mazda Automobile's Nanjing plant at the end of October, with sales to follow in January 2008.