Magazine-thin laptops, MP3 players and bite-size candy bars are just a few examples of good things that come in small packages. Now, for the first time in North America, Mazda is introducing its own affordable, fun-sized creation - the 2011 MAZDA2. It will launch into the North American market in July 2010.

Zoom-Zoom in its most concentrated form, MAZDA2 is the latest in a line of stylish, insightful and fun-to-drive small cars from Mazda, and will bring an all-new level of refinement to the segment. MAZDA2 is a car that only the engineers at Mazda could have created. It was designed and engineered from scratch to be a pure Mazda, offering the sort of driving experience that could only come from the company that developed the timeless MX-5 two-seat roadster, and it brings a combination of athletic design and dynamic performance to the subcompact class. 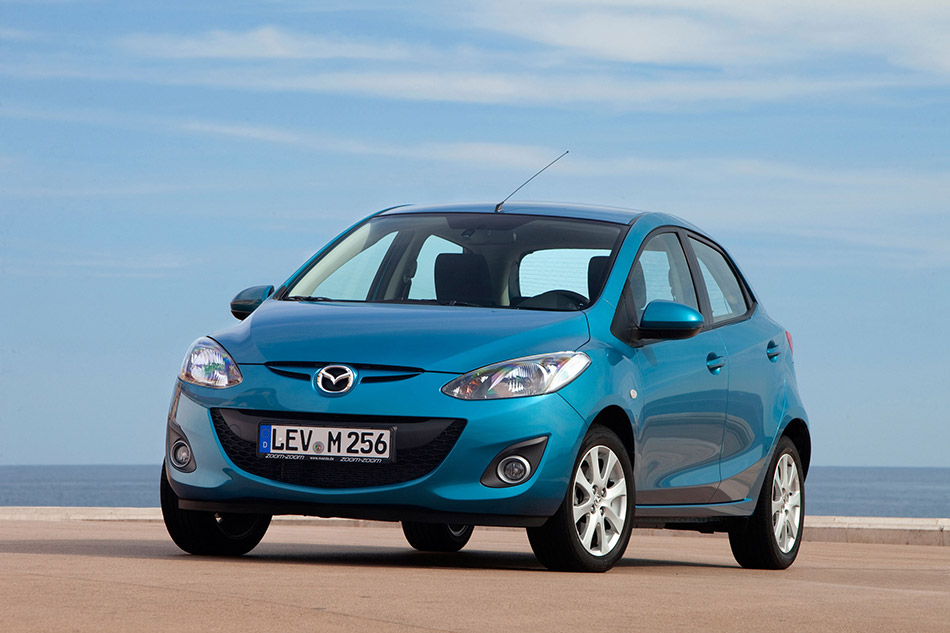 Originally launched in 2007, the MAZDA2 was first introduced in Europe, Japan and Australia. Its launch created a unique offering in the subcompact segment, especially through its distinguished design and outstanding driving performance. Since then, it has been highly acclaimed throughout the world, winning 48 automotive awards, including "Car of the Year" accolades in many markets, including Japan, New Zealand, Chile, Bulgaria and Greece. Notably, the MAZDA2 was selected as the "2008 World Car of the Year" (WCOTY) at the 2008 New York International Auto Show and has established a distinguished position in the subcompact segment. Total global sales have reached over 400,000 units in the three years since its introduction, and MAZDA2 is now recognized as one of the global models which symbolizes the essence of the Mazda brand.

While developing the new MAZDA2, Mazda took a thorough look at global trends and carefully worked to identify the truly beneficial values that could be infused into a global subcompact car. As a result, the new MAZDA2 adds Mazda's unique brand values such as exhilarating driving performance and eye-catching design to the segment without sacrificing the basic requirements for subcompact cars: superior fuel efficiency, high crash safety performance and ample passenger space. In fact, while other carmakers have increased the size of their small cars, Mazda's first mission was to analyze and define the optimal size of a subcompact vehicle. This resulted in a very efficient body size for the new MAZDA2 without sacrificing attractive features that consumers desire.

With the MAZDA2, Mazda evolved the athleticism that is inherent to the Mazda design DNA in pursuit of bold and diverse expression of movement. The basic form of the new MAZDA2 is characterized by a combination of dynamic performance, sportiness and simplicity that leaves a strong visual impression. While competitors are producing subcompact cars with a focus on a boxy body form to prioritize functionality, Mazda shortened the body overhangs and trimmed the corners to the greatest extent possible as a way to provide a form that is compact and sporty, conveys a sense of stability and inspires confidence. By carefully creating a base form and then giving it energetic character lines befitting a subcompact car, Mazda created a design that is highly distinctive, but timeless.

Mazda pursued a concentrated, taut form for the body as a virtue in itself, not to simply reduce the car's body size. This creative background was advantageous in efforts to achieve maximum dynamic performance within the new MAZDA2's compact body. In other words, the MAZDA2 possesses the essence of Mazda's spirit of compact, sporty dynamic performance - "Zoom-Zoom Concentrated."

In pursuit of a solid form and a richly expressive exterior design, Mazda established an exterior design theme of "coordinated movement". In line with this theme, the design team combined the visual movements created by the car's silhouette, its body lines, and the way in which patterns of light played on the body to create dynamic, multifaceted expressions not typically seen on a subcompact car. These expressions exude a powerful energy that makes the new MAZDA2 look as though it is moving while standing still. Key exterior design elements include: a sporty wedge shape that conveys a strong sense of forward motion; a deeply sculpted form in which the body is drawn inward fore and aft of the A-pillars; and distinctive character lines that extend from the front fender arches to the body shoulders.

The interior design theme for the MAZDA2 is "a space that communicates movement". Whereas most subcompact cabins have monotonous design treatments with flat surfaces, the design team made the MAZDA2's cabin strikingly different through contoured forms that combine reassuring thickness with strong visual movement. Particular effort was devoted to optimizing the position and cross-sectional shape of the A-pillars, which, when combined with an extremely low belt line, enables excellent forward visibility. As a result the MAZDA2 feels surprisingly open and roomy.

The instrument panel helps to create a sense of space, style and substance. Its shape prevents it from looking heavy and making occupants feel constrained. The controls are concentrated in the central area, and those that are frequently used by the driver are as close as possible to the driver. The instrument panel's left- and right-hand portions, where there are no controls, curve forward and away from occupants, creating an impression of airiness that stops the cabin from feeling cramped.

At the same time, the instrument panel's middle area has a substantial form that communicates a unique character. The climate-control vents and various controls possess distinctive circular details that contribute to a fresh, emotionally appealing look and feel. It emphasizes the sportiness of the new MAZDA2's cabin and conveys a sense of friendliness. A simple centre-stack shape is complemented by a swath of piano black trim to express a distinctive personality and a sense of quality. Both audio controls and climate controls are laid out for easy legibility. Related control buttons are grouped according to function for intuitive ease of use.

Although the cabin has a stimulating, enjoyable look and feel befitting a subcompact car, Mazda's design team chose not to use bright colors for the trim, instead using black and silver for a strong contrast that gives a sharp, sporty impression. Silver was used sparingly, limited to the sides of the steering wheel, the automatic transmission's shift gate, and a few other key places in order to maximize its effect. The seats are structurally slim and are upholstered with textured fabric that has a black keynote color. 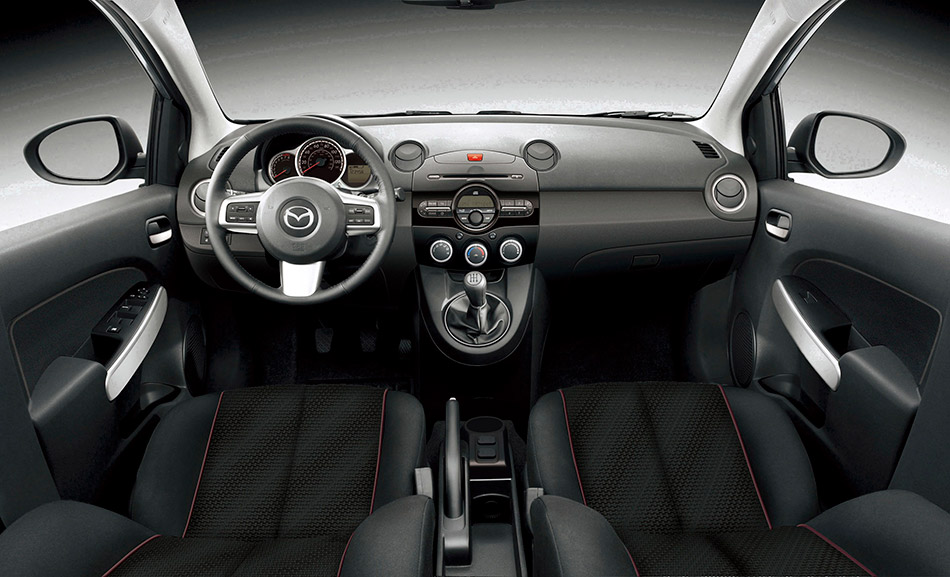 The MAZDA2 will also be the first Mazda vehicle launched in North America with Mazda's Brake Override system. This system always prioritizes the brake pedal over the accelerator pedal, should both be engaged simultaneously, allowing the vehicle to be brought to a safe stop. Activation of this system will be recorded in the electronic Powertrain Control Module (PCM) and will be readable with the correct equipment. Mazda is planning to roll out this new system to all future Mazda vehicles in North America during the 2011 model year.

The 2011 MAZDA2 is available in two trim levels - the entry-level Sport and top-grade Touring. Both trim levels offer the versatility, features and style consumers in the market for a subcompact want, at a price they can afford.

Mazda focused on realizing driver-oriented maneuverability and confidence-inspiring driving dynamics ｆor a Zoom-Zoom driving experience that is unique in this segment.

The driving experience that Mazda strives for has two key attributes: 1) a sense of linear acceleration and deceleration that responds crisply to how far the accelerator pedal is depressed, allowing the driver to control car speed as desired; and 2) a sense of liveliness through immediate response to the accelerator for quick off-the-line acceleration and overtaking. The development team targeted a performance feel reflecting enhancement of both of these key attributes without adversely impacting on the MAZDA2's superior fuel economy as a subcompact car.
Preliminary tests indicate that all MAZDA2s equipped with five-speed manual transmissions are expected to return 28/35 MPG (city/highway), while models equipped with available four-speed automatics are expected to return 28/34 MPG (city/highway).

The new MAZDA2 inherits a highly regarded suspension system, which has MacPherson struts at the front and a torsion-beam axle at the rear. With improved steering and braking systems, the resulting dynamic performance yields consistently responsive handling and a smooth, stable ride that customers have come to expect from Mazda.

In order to create more comfortable day-to-day driving, Mazda took various measures to achieve a quiet cabin environment. Mazda also improved the coefficient of drag values to achieve better aerodynamics, contributing not only to the MAZDA2's quietness, but also to a more sporty ride and fuel efficiency.

In order to form the best balance between lower fuel consumption, outstanding driving dynamics and top-level safety performance, the new MAZDA2 reflects the close attention paid to minimizing weight through its smaller body shell, optimization of the structure, extensive use of high-tensile steel and many other weight-saving measures implemented throughout the car. Under this approach, Mazda made the best use of weight-saving know-how, similar to the "gram" strategy employed during the development of the MX-5 sports car.

As a result, the MAZDA2 has achieved world-leading crash safety ratings (five stars in the Euro New Car Assessment Program (NCAP), the highest possible result) without compromising driving performance and fuel economy. In line with the way subcompact cars are mainly used as day-to-day commuters, with a driver-oriented development philosophy, the MAZDA2 has achieved a level of drivability and nimbleness that enables easy maneuverability, even in small car-parking areas and other tight spaces.

Celebrating its 40th Anniversary in North America in 2010, Mazda North American Operations is headquartered in Irvine, Calif. and oversees the sales, marketing, parts and customer service support of Mazda vehicles in the United States, Canada and Mexico through nearly 900 dealers. Operations in Canada are managed by Mazda Canada, Inc., located in Ontario; and in Mexico by Mazda Motor de Mexico in Mexico City.