Following the success of the 2000-kilometre event in 1934, in August Kissel stressed "[...] that it was absolutely essential to bring out a small, streamlined sports car by the spring of 1935." Thus in November 1934 the Daimler-Benz Board of Management decided to build two Sport Roadsters based on the Mercedes-Benz 150 for the 1935 IAMA in Berlin. One of these was to be presented at the exhibition stand, the other to be available for test drives. Delivery of the production units was scheduled for May.

Like Wilhelm Haspel as Head of the Sindelfingen plant, the Head of Testing Fritz Nallinger stated his position with respect to the new Sport Roadster in January 1935, making mention in particular of the compressed-air radiator, which was later also used in the 170 H model, the two spare wheels mounted on either side behind the doors and the centrally mounted high-beam headlamp at the front end. 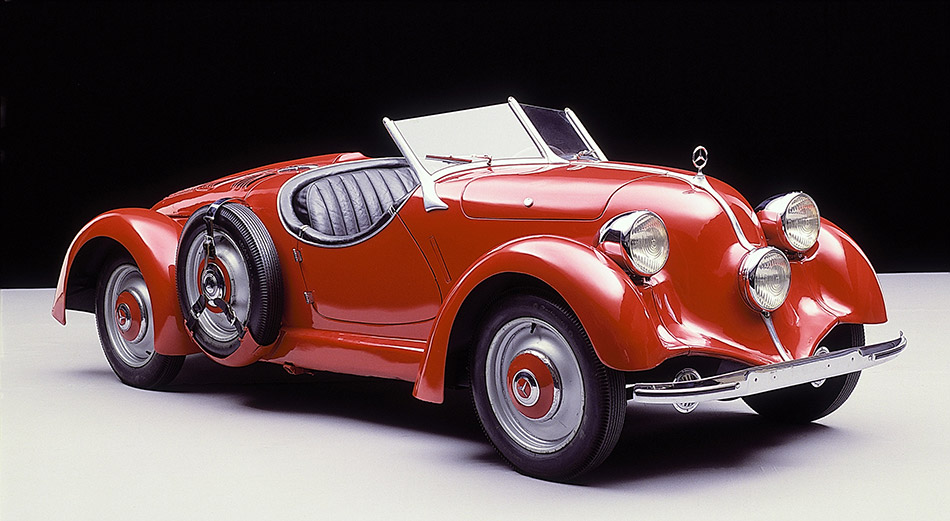 The body design of the Sport Roadster was fundamentally different form that of the Sport Saloon. As an all-new design, it bore several typical features of open-top sports cars of the day, including, for example, the swept split front windscreen and the two free-standing spare wheels mounted in front of the rear wings. Also highly distinctive was the pointed boat-like rear end with its two licence plate holders. A free-standing Mercedes star was mounted at the front end.

One sales brochure hailed the vehicle as a "thoroughbred sports car", highlighting the qualities of the sports engine and its outstanding power-to-weight ratio. "Each hp has a load of just 19 kg! This explains how the 150 has acceleration in every gear – and virtually on a par with that of a supercharged car."

In terms of technical design, including the engine, it was identical with the Sport Saloon. The compressed-air cooling permitted the use of a smaller radiator, since the cool air was forced through the radiator by a blower driven by the engine. The small rectangular radiator was mounted behind the engine above the rear axle.

Behind the seats was stowage space for both the lightweight, button-on soft top and small items of luggage. And the front bonnet could accommodate a large suitcase and the fuel tank. The 150 model was offered at the 1935 IAMA with a price tag of RM 6,600.

The Mercedes-Benz 150 Sport Roadster remained a part of the official sales range until 1936, but was only built in extremely small numbers. Records vary as to the exact number of units produced. One production statistic puts the figure at 20 examples. The statistics for bodies produced at Sindelfingen records just five examples – one in 1934, four in 1935. On the other hand, the order books show just two deliveries. But one thing is certain: the 150 model was not only one of the rarest cars from the Mercedes-Benz brand, it was also one of the most technologically innovative vehicles of its day.

One 1936 Roadster is in the possession of Daimler AG. It was purchased second-hand in the early 1950s with a mileage of 44,500 kilometres thanks to the intervention of former Board of Management member, Jakob Werlin. It would appear to be the only surviving vehicle of this highly innovative model series.