An elegant, open-top sports car with the Mercedes star on its radiator: That is model 190 SL (W 121), which Mercedes-Benz presented in New York in 1954 and whose market launch was in 1955. The roadster's story began with Maximilian E. Hoffman, since 1952 the New York-based official Mercedes-Benz importer for the US market. In 1953 he realised the sales potential for sports cars from Mercedes-Benz in the USA, and then campaigned for two of these vehicles to be built as production vehicles: according to Hoffman's recommendation, the 300 SL Racing Coupé (series W 194) was to be made available – with modifications – as a production vehicle, and the Stuttgart-based brand was at the same time to produce an open-top sports car to accompany the Gullwing coupé. That is how the 190 SL was born. 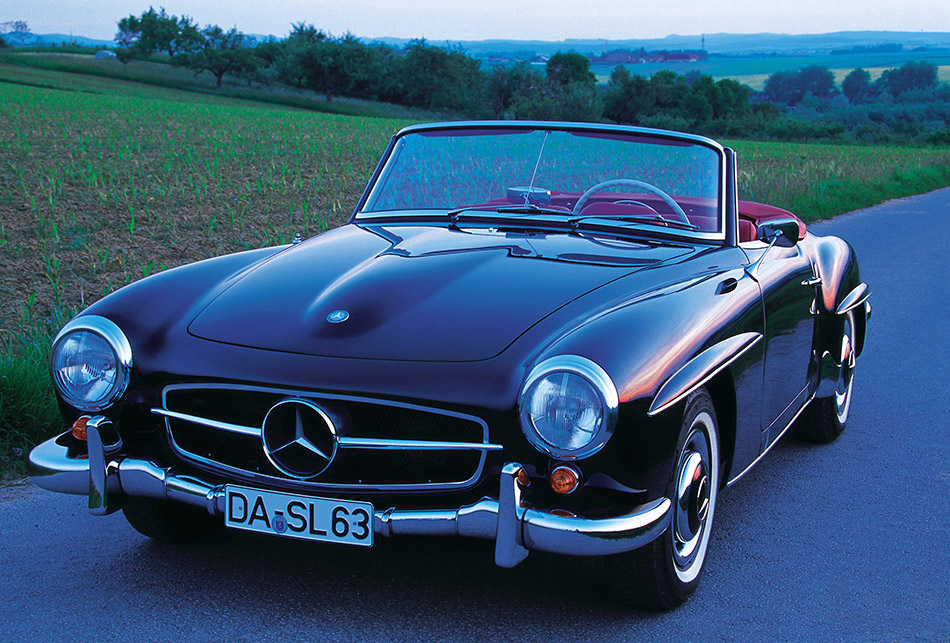 At the time Daimler-Benz was fully saturated with design and development tasks – both for production vehicles and also with the preparation for the 1954 racing season, for which the new W 196 R series formula racing car was intended. Due to the enormous workload, the Stuttgart-based company even stalled their planned participation in the 1953 sports car races. The new SLs increased the pressure, but were considered important for Mercedes-Benz's image and market position. For the 1950s were a time of great expansion after the Second World War. With sports cars Mercedes-Benz would be able to round off its model range with attractive, exclusive vehicles in a new segment – ever since 1935 decidedly sporty cars had been missing in their portfolio. Thus already in mid-September of 1953 the Board's decision was taken: the 190 SL and the 300 SL were to be built as series production cars.

About five months later both cars were to celebrate their premières in America: they were presented at the International Motor Sports Show in New York which took place there from 6 to 14 February 1954, at that time the most important motor show on the other side of the Atlantic. This meant that the engineers had very little time for development. Speed was of the essence, especially in the case of the 190 SL, which had to be technically redesigned based on the 180 series, whereas for the 300 SL production sports car, the further-developed 300 SL racing sports car served as a model. Already a few days after the Board's decision, the directors of Daimler-Benz were examining the first sketches, and two weeks further on they were able to assess the first 1:10 scale model, which was followed another eight weeks later by a full-scale model.

The pace of development was raised still further. The floor assembly,which came from the Mercedes-Benz 180, had to be adapted to the new ideas and the right engine had to be found. Moreover, the tight schedule stipulated that the contours of the planers on which the body would be created be finalised by 31 October 1953. The race against time was won: Mercedes-Benz registered a tremendously favourable response to both vehicles at the show.

Until then, the bodies of various models had been available in the two-seater A-version as Cabriolet, Roadster, or Coupé, too. According to chief engineer Fritz Nallinger, this body variant would be replaced in future by the SL vehicles – no longer with the existing formal lines and face, but explicitly in the SL design, which included the star placed centrally on the radiator grille. This was a paradigm change in the model structure, making the 190 SL and 300 SL the symbols of a new product philosophy and the forerunners of the later SL-Class.

While series production of the Mercedes-Benz 300 SL began in August 1954 at the Sindelfingen plant, the 190 SL was thoroughly revised once more because the car displayed at the International Motor Sports Show in New York was neither technically tested nor stylistically mature. In March 1955, Daimler-Benz then presented the final model of the sports car at the Geneva Motor Show. The body was designed by Walter Häcker and closely followed the design of the 300 SL Gullwing Coupé. However, unlike the 300 SL, the 190 SL had a retractable soft top.

The production body showed some clear differences from the show car: the stylised intake scoop on the bonnet was dropped; the forward edge of the bonnet had been moved farther back; there were splash guards above the rear wheel arches too; and the bumpers, indicators and tail lights were modified. The Sindelfingen factory started building the pre-production series in January 1955. Main series production commenced in May.
The 190 SL is technically related to the "Ponton" (pontoon) saloons – commonly so called because of their characteristic body shape – of the W 120/121 series. Their internal designation was W 121, and the 190 that appeared in 1956 was also given that designation. From the beginning the 190 SL was designed as a two-seater cabriolet.

In the 1950s, the meaning of the term "roadster" experienced a change. The classic roadster was a rather spartanly equipped sporty two-seater with detachable side windows, for instance, and a removable fabric top with its roof frame. But the customers' comfort standards were now higher, and the Mercedes-Benz 190 SL sports car responded to this. Though not a roadster in the classic sense, it was designated as such by the company.

In contrast to the 300 SL, bearing the mark of its racing sport origins, it was conceived as a sporty-elegant two-seater touring and utility car. It was available in three versions: as a car with a fabric top (price in February 1955: DM 16,500) and as a coupé with removable hard top, optionally with or without a fabric top (price in September 1955: DM 17,650/DM 17,100). These prices make clear the exclusive placing of these vehicles in the model range. The 300 SL cost DM 29,000 DM in 1954, and thus considerably more than the 190 SL, however, the sports car was clearly placed above the Saloon – thus Mercedes-Benz offered model 180 at a list price of DM 9450 in 1954/1955. As an optional extra, a third, transversal seat could be fitted in the rear of the 190 SL.

The motor press praised the 190 SL among other things for its safe handling properties. These were ensured by the low-pivot single-joint swing axle already familiar from the 220 a, and other features. The front wheel suspension including the sub-frame was adopted from model 180, from which the floor assembly – though shortened – also came.

A new development was the 1.9-litre petrol engine with the designation M 121 B II. The four-cylinder unit had a single overhead camshaft and is regarded as the forerunner of an entire family of engines. In the Mercedes-Benz 190 SL it developed 105 bhp (77 kW) at 5700 rpm and accelerated the fabric-topped variant from 0 to 100 km/h in 14.5 seconds. The top speed was a respectable 170 km/h – which made it one of the fastest cars on the road in the 1950s and 1960s. The petrol consumption was put at a rather moderate 8.6 litres per 100 km; the 65-litre tank provided adequate range.

During its production run the 190 SL underwent many improvements in details. Clearly recognisable are the wide chrome strips on the upper edge of the door (introduced in March 1956) and larger tail lights (June 1956, as also used on models 220 a, 219 and 220 S). In July 1957, the rear licence plate lamp was moved to the bumper horns to enable fitting the wide licence plates which were being introduced at the time. The rear bumper horns were thus a basic equipment item, while at the front they cost extra; the US versions always had them at the front and the rear as standard. From October 1959, a new hardtop with a larger rear window gave the coupés much improved rear visibility. In August 1960, the lock of the boot lid was changed; simultaneously a recessed handle replaced the previous bow-type handle. In 1963, the last Mercedes-Benz 190 SL rolled out of the production bay. In all, 25,881 were built. Most of them went to the USA – Maximilian E. Hoffman's evaluation proved right.

A sports variant of the Mercedes-Benz 190 SL

The first sales brochures showed a sports variant of the 190 SL: light-alloy doors, small Perspex racing windscreen, no soft top, no bumpers, heat exchanger or insulating material, gave it a weight of 1000 kilograms, around ten per cent less than the normal road version. The number of units built is not documented, and only very few sports versions found their way to the customers; they probably also came in for further fine tuning with modifications to the four-cylinder engine, lowering of the body, sports shock absorbers and modified springs.The sports 190 SL scored its biggest success in 1956 in the Sports Car Grand Prix in Portuguese Mação, entered by the then Daimler-Benz importer in Hong Kong. The right-hand-drive sports car took first place ahead of a Ferrari Mondial and various Jaguar and Austin-Healey cars. In the same year the Mercedes-Benz general importer in Morocco won his class (GT to two litres displacement) in the Grand Prix of Casablanca. On account of the racing regulations the idea of the sports 190 SL was not pursued any further: in many competitions the vehicle, modified as described, would have been classed as a production sports car and thus would not have had a chance. On top of that a decision of the racing authority FIA (Fédération Internationale de l'Automobile) prevented classification as a GT – it said that a Gran Turismo must have a completely enclosable body – a condition which the converted 190 SL could not meet. 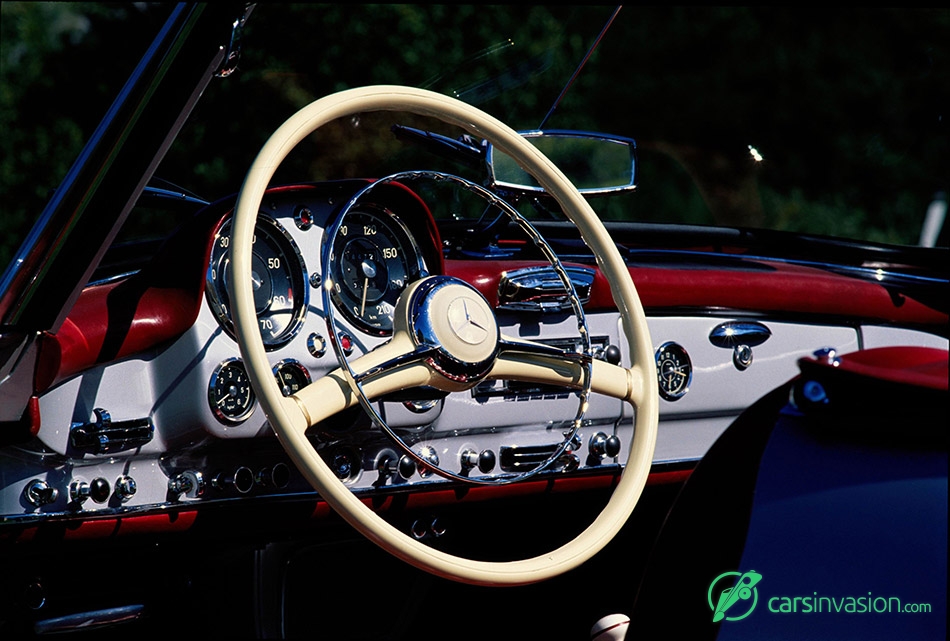 The Mercedes-Benz 190 SL in the press

Shortly after the presentation of the Mercedes-Benz 190 SL at the International Motor Sports Show in New York, "auto motor und sport", Germany, No. 3, 1954, wrote: "The Mercedes 190 SL is an elegant and fast touring sports car that can be used as an ordinary, workaday vehicle, but additionally offers the possibility of successfully competing in smaller sporting events. ... For this new model Mercedes dispensed with its hallowed radiator tradition, as it did for the 300 SL. The very harmonious front end nevertheless shows that elegant and distinguished lines are entirely possible without neglecting the attributes of fashion and functionality."

The Swiss journal "Automobil Revue", wrote in its November 14. 1956 issue: "Despite its high output the 190 SL is not actually a sports car, but an uncomplicated touring car that stands with all its four wheels firmly planted on the ground. Thanks to its exemplary handling characteristics it is among the select group of vehicles with which it is possible to reach the highest average speeds safely and without haste, and taking full consideration of all other road users."

In its spring issue 21/1957, the German magazine "Motor-Revue" published a first road test report. The tester wrote: "When using the prescribed tyres it is possible to accelerate the 300 SL Roadster with turned front wheels at curve limit speeds, without it showing the slightest tendency to break out. This meek character of a sports car with top speeds of 235-250 km/h (depending on transmision ratio) with a powerful acceleration capacity, basically due to soft suspension and exceptional adjustment, make the new Roadster the vehicle with the greatest performance and safest handling that I have ever driven. It seems to me most noteworthy that, with the top in place there is a total absence of vibrations, rumble and resonance phenomena in the interior of the car – also a success of the loving attention lavished on the adaptation of the space frame, wheel suspension and wheels, an adaptation that has been optimally solved."

In 1960 "auto motor und sport", Germany, No. 15, 1960, published a detailed test report on the Mercedes-Benz 190 SL: "The 190 SL owes its good reputation not just to its elegant appearance, but also to its robustness and reliability and its accurate handling. The good build quality of the body and the roadster soft top deserve special mention."