The New-Generation A-Class is now on sale and is safer, more economical and even greener than before.  To date over 125,000 A-Class have been sold in the UK since it first launched in 1997 making it one of the best selling models in the range.  The design has been revised and new technical developments have further enhanced levels of safety with crash responsive lighting and adaptive brake lights.  The car is even more comfortable as a result of new interior materials, with improved adjustment and support in the seats.  All models have new infotainment systems with Bluetooth connectivity, and the engines are now more fuel efficient as a result of three new BlueEFFICIENCY models.

From March 2009 an ECO start-stop function will be available on the A 150 and A 170 with manual transmission and the three-door A 160 CDI will benefit from an optional BlueEFFICIENCY package which improves fuel consumption of the Coupé by more than 11 per cent, to 64.2 mpg. Independent experts have awarded the A-Class with the internationally valid environmental certificate already held by the C-Class and S-Class.

The Mercedes-Benz A-Class is now more youthful and self-confident than before. The sweeping lines of the newly designed headlamps harmoniously combine the front end and flanks, while the redesigned front bumper reinforces this impression; its lower air intake is now much larger, emphasising the width of the body. The radiator grille is also new in design which underlines the progressive aura of the A-Class. 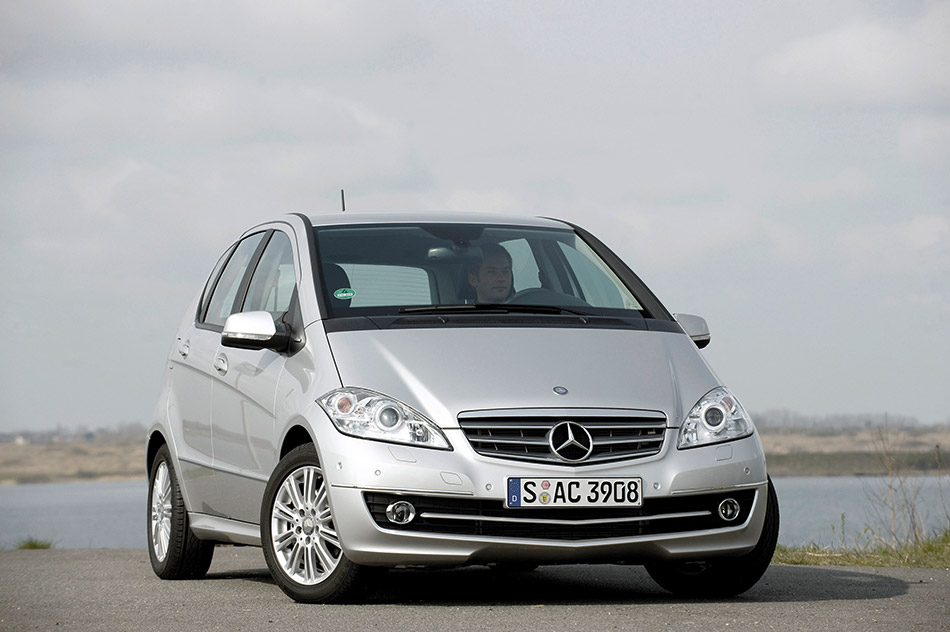 Three trim lines for customers to choose from

Design features at the front end show the distinctions between the design and equipment lines of the A-Class.  The louvres in the radiator grille of the entry level version are painted in dark-grey.  In the ELEGANCE SE AND AVANTGARDE SE models they are metallic atlas grey and high-sheen iridium silver, respectively.  These two models also have stainless steel tailpipe, fog lamps with chrome trim, projection beam headlamps, a chrome tailgate handle and body coloured side skirts.  All three trim lines can be identified by their individual wheel designs and interior trim.

All models now feature larger exterior mirror housings and the door handles are now painted in the vehicle colour for all model variants.

The ELEGANCE SE and AVANTGARDE SE lines have seats which are upholstered in an attractive combination of ARTICO man-made leather and fabric and available in three colours. In addition new decorative trim of smoke-grey, diagonally brushed aluminium enhances the interior of the AVANTGARDE SE line, while wood trim adds to the look and feel of the ELEGANCE SE.

With fuel consumption figures between 42.8 and 64.2 mpg, the new-generation A-Class is extremely economical to run.  Thanks to the introduction of an optional BlueEFFICIENCY package for the three-door A 160 CDI, the fuel consumption of the state-of-the-art direct-injection diesel engines has been improved by more than 11 per cent or 6.6 mpg compared to the previous model.  Available from autumn 2008, the package features measures to further improve engine efficiency, aerodynamics, rolling resistance, energy management and weight.  It also features a diesel particulate filter.  The sum of these measures means that the A 160 CDI BlueEFFICIENCY has an impressive fuel consumption of 64.2 mpg and as a result the CO2 emissions of the 82 hp Coupé are 116 g/km.

The ECO start-stop function lowers fuel consumption and exhaust emissions by automatically switching off the engine during idling phases.  ECO start-stop will be available from spring 2009 for the A 150 and A 170 when twinned with the five-speed manual transmission and will both be badged BlueEFFICIENCY.  When travelling at low speed, the driver only needs to shift the manual transmission to neutral and apply the brakes. The engine is then switched off, and the ECO display appears in the instrument cluster.

The A 150 BlueEFFICIENCY (95 hp) achieves 48.7 mpg, resulting in 139 grams of carbon dioxide per kilometre.  In city traffic, the new ECO start-stop function can result in fuel savings of up to nine per cent.

Ecology: the A-Class is the first compact car with an environmental certificate

The environmental compatibility of vehicles is not only assessed on the basis of standardised emissions and fuel consumption measurement, but takes into account the entire vehicle lifecycle of the vehicle.  An environmental audit which analyses over 40,000 processes is the basis of the environmental certificate according to the stringent international ISO standard 14062 (Design for Environment).

Mercedes-Benz is the world's only automobile brand to have received this accolade.  The assessment reveals that CO2 emissions are around seven per cent lower than the figure for the preceding model of 2004, and nitrogen oxide emissions have been reduced by 13 per cent.

Carbon dioxide emissions over the entire lifecycle of the A 150 BlueEfficiency with ECO start-stop are reduced by a further five per cent, which means that the environmental audit shows a remarkable reduction in CO2 emissions by more than 12 per cent compared to the preceding model.

The recycling concept of a vehicle is also considered.  95% of the A-Class can be recycled so already meets the EU regulation coming into force from 2015 and renewable raw materials are used during production including the use of flax, olive stones, cotton, coconut fibre, wood veneers and abaca fibres.

The adaptive brake light technology is a standard feature. Under emergency braking from a speed exceeding 30 mph, the brake lights flash rapidly to warn following traffic, enabling drivers to respond quicker and prevent a collision.  Mercedes engineers found that the braking responses of drivers are on average 0.2 seconds faster in emergency braking situations if a flashing red warning is given in place of conventional brake lights.

The A-Class continues to set standards in this market segment where occupant protection is concerned and now adds to its already extensive safety technology with crash-responsive emergency lighting for the interior. This is switched on automatically following an accident of a defined severity, providing the occupants with better orientation and helping the emergency services.

Drivers of the A-Class can now opt for active park assist.  This system which operates up to 25 mph scans the road to identify suitable parking spaces for the car. Once a suitable space is found the driver has the option to park.  By engaging reverse they accept the identified space and then just need to accelerate and brake.  Active park assist takes over the steering and automatically manoeuvres the car into the parking space. The parking space only needs to be 1.30 metres longer than the A-Class, there is currently no other car able to park automatically in such a small space.

The car also has Hill Start Assist,which prevents it from rolling backwards when the driver moves from the brake pedal to the accelerator when moving off on an uphill gradient.

Like all the new 2008 Mercedes models, the A-Class is available with new information, communication, navigation and entertainment systems in the form of Audio 20, Audio 50 and COMAND.  Audio 20 incorporate a radio with twin tuner, colour display, a Bluetooth interface for a mobile phone, a telephone keypad, a CD-player, automatic volume adjustment and a connection for external audio units in the glove compartment. Audio 50 is also equipped with a Europe-wide DVD navigation system and a DVD drive, while the top-of-the-range COMAND features HDD navigation, a music register, a slot for SD memory cards and voice control. The LINGUATRONIC system operates the telephone, audio and navigation system by convenient whole-word commands so the driver can simply say what they want.

Interface: the "iPod" can be operated via the keys on the steering wheel

A-Class drivers can also benefit from the new optional media interface, which enables the driver to connect an MP3-player, USB stick or other external audio.  The media interface enables the driver to charge the device, control the device through the infotainment system via keys on the multifunction steering wheel and see the titles of music tracks in the instrument cluster and on the colour display in the centre console. Connection of an iPod or similar requires a suitable cable which is available from the Mercedes-Benz accessories range.