Innovation backed by tradition - RINSPEED DESIGN of Zumikon, Switzerland continues to demonstrate its expertise in the design, development and implementation of new technologies. At the first Geneva Motor Show of the new millennium, the creative vehicle builder is presenting the Rinspeed Advantige Rone.

For RINSPEED developers the goal was clear: create a strikingly designed, down-to-earth sports car that offers tons of unique driving fun with exemplary environmental friendliness. The Advantige Rone with its height of only 97cm (38") is the lowest automobile and the first sports car in the world that runs on biofuel made from kitchen and garden waste. 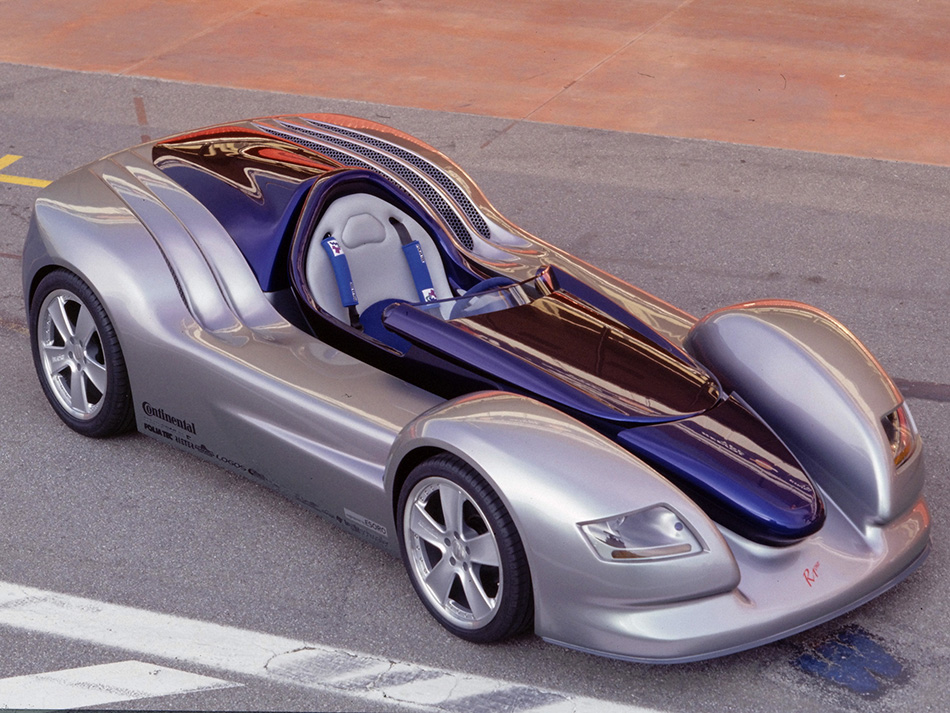 The design : straight from pit lane

The roots of the Advantige Rone are unmistakable even at first glance: Pure motor racing. The well-balanced combination of Formula 1 and LeMans racecars results in an unusual, highly aerodynamically efficient design with the driver at its center. The car's body lines are reinforced by longitudinal air inlets in the shape of shark gills. The rear view mirrors have been replaced by three color cameras whose images are transmitted to LCD monitors in the cockpit.

The most striking characteristic in the cockpit of the Advantige Rone is the central and extremely low seating position of the driver. As in earlier Rinspeed concept cars (Mono Ego and E-Go Rocket) the driver sits in the middle and - at least while driving - remains alone.

The almost reclining position of the driver allows for an extremely low body profile. The overall vehicle height is just 97cm - low enough that a stunt driver could pilot it underneath a flatbed trailer.

The cockpit also leans into turns in motorcycle fashion, governed by the centrifugal forces created by turning speed and radius. The result is a completely new turning sensation. Says Rinspeed boss Frank M. Rinderknecht, 45: "This unique combination of automobile, motorcycle and racecar cries out for the endless hairpin curves of Mediterranean coastal roads - a truly special thrill and treat."

The Advantige Rone with its bivalent drive concept (gasoline/biofuel) is the cleanest sports car in the world. Even fueled with compressed natural gas (CNG) the environmental advantages are impressive: Exhaust emissions are 60 to 95 percent below today's stringent emission limits for gasoline or diesel vehicles.

Even more environmental friendly is the operation with resource-conserving Kompogas. It is produced by fermenting organic waste - mostly kitchen and garden waste - and is therefore CO2 neutral. With the energy extracted from 100 kilograms organic waste the Advantige Rone will cover 100 kilometers without contributing to the so-called greenhouse effect.

This new technology is a development of the Swiss Kompogas AG in Glattbrugg. It is already in use in numerous plants around the world. Among the licensees and interested parties are companies from Switzerland, Germany, France, Austria, Japan, USA, Brazil and Australia.

A Kompogas plant with a yearly capacity of 20 000 metric tons produces the energy equivalent of 1.4 million liters (370,000 US gallons) of gasoline. If all organic waste were recycled in Kompogas plants a considerable part of individual transportation could be accomplished using CO2 neutral fuel.

Contrary to many concept cars by other tuners the Advantige Rone is not just a mere showpiece. It is a cradle for new ideas and technologies and a first glimpse of the new exclusive tuning program Advantige Audi Individual of Rinspeed GmbH, which also debuts at the Geneva Motor Show 2001. On the Advantige Rone Rinspeed GmbH for the first time presents its original split-rim 8.5 x 19-inch wheels with their unmistakable styling. The Remus tailpipes in Advantige design also make their debut on the Rone.

The technology : lightness of being

The rear-mounted bivalent 1.8-liter four-cylinder engine (16V) produces 120 hp at 5,500 rpm and delivers its maximum torque of 165 Nm at 3,000 rpm. Power is transferred to the rear axle via a five-speed manual gearbox.

The body of the Advantige Rone is made from rarely used Pre-Preg composite and lends the Rinspeed Advantige Rone extraordinary stability at extremely low weight. Thanks to this exemplary lightweight design the Swiss "shark" weighs in at a mere 750 kg. The resulting power-to-weight ratio is enough to set hearts racing _ even among pilots of exclusive Italian sportscars. Performance is correspondingly impressive: The Advantige Rone accelerates from 0 - 100 km/h in less than six seconds and has a top speed of 205 km/h.

The two-piece Advantige 19-inch wheels are independently suspended using custom-developed Eibach springs. The ample tire dimensions of the brand-new SportContact 2 by Continental (235/35 in front and 255/40 in rear) guarantee safe grip at all times. Together with the extremely low center of gravity of the vehicle, the tires allow extraordinary high cornering speeds. High-gloss chrome plated tailpipes by Remus further emphasize the sporty nature of the Advantige Rone. The cross drilled brakes disks from Derendinger guarantee safe stopping.

The interior : envy of formula pilots

The sporty interior is a captivating blend of technical functionality and creature comforts. An innovative hi-fi system by Sony delivers musical pleasure. Engine and vehicle data is displayed by two large round gauges as well as by two futuristic head-up displays from in.pro. Despite the relative confines of the interior an exclusive carpet from Rieter Automotive Systems and choice upholstery material from X-Mobil create a comfortable atmosphere. Foliatec contributed many sharp styling elements for the interior and the exterior. The conspicuous paint job by Standox in the 'Exclusive Line' hues Standox "Imola Ice" and "Catalunya Splash" changes color from blue and silver to red depending on the light angle. 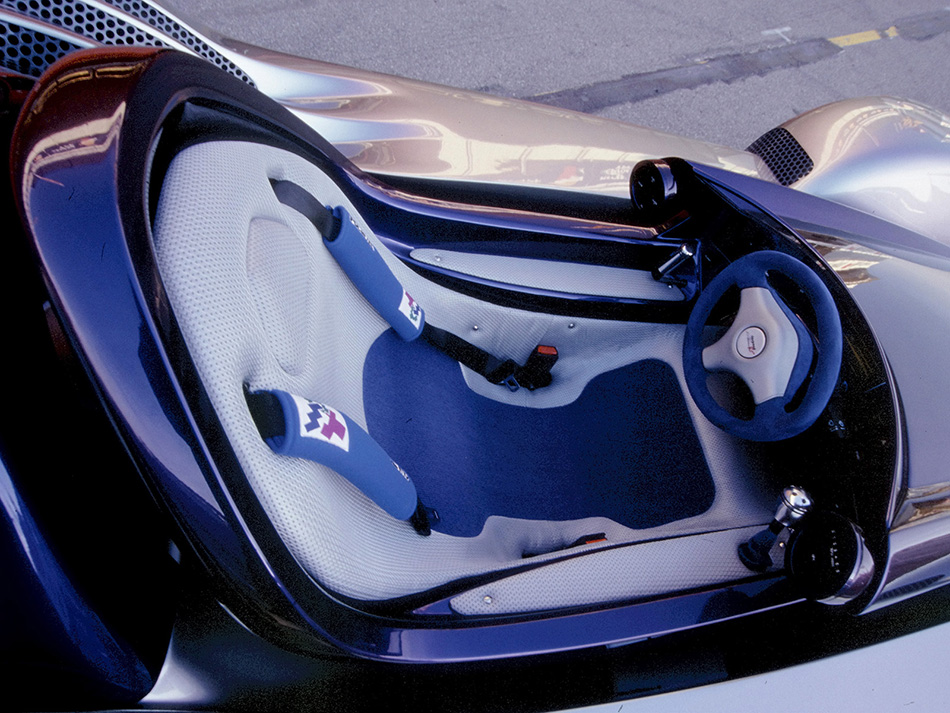 Frank M. Rinderknecht used highly advanced technology and a Swiss-based network of automotive specialists for his project. Although there is no automobile production in Switzerland to speak of, there is a very active automotive supply industry there. Many highly innovative prototypes have been developed and manufactured in Switzerland.

The Swiss engineering company Esoro was hired as general contractor for the entire project, including for project management, engineering, design and manufacturing of the Advantige Rone. Esoro completed the challenging task on schedule with the help of three of its best Swiss-based suppliers. Protoscar oversaw the design and animation on a sophisticated 3D CAD system. Logos manufactured the moulds and composite parts and Schwaller Movement Engineering – a supplier of the Sauber Formula 1 team – did the metal work. The team translated initial sketches into a fully functional prototype in just four and a half months.

Esoro is an independent engineering company that delivers solutions for the automotive industry. The company is well known for its innovations in the areas of composite materials, production technologies, lightweight construction and fuel cell vehicles. Esoro's prototypes are renowned for their originality, quality, design and fuel efficiency.