After three successful years, Mercedes-Benz has overhauled the design and engineering of the B-Class. Since its Canadian market premiere in the summer of 2005, the B-Class has evolved into the blueprint for a new segment which harmonizes the benefits of various vehicle concepts. The 3"D" effect is what characterizes the uniqueness of this vehicle category: Dimensions, Design, and Dynamism. The B-Class boasts the dynamic design of a sporty coupe, the exterior dimensions of a compact car, and the spaciousness of a wagon with the versatility of a small SUV and the trademark safety of a Mercedes-Benz.

The sales figures for the B-Class provide clear evidence that Mercedes-Benz product planners hit the mark with a vehicle that caters to the needs of today's buyer. In Canada, over 8,400 customers have already taken delivery of a B-Class, and world-wide since mid-2005 more than 350,000 people have been won over by this practical and stylish vehicle. 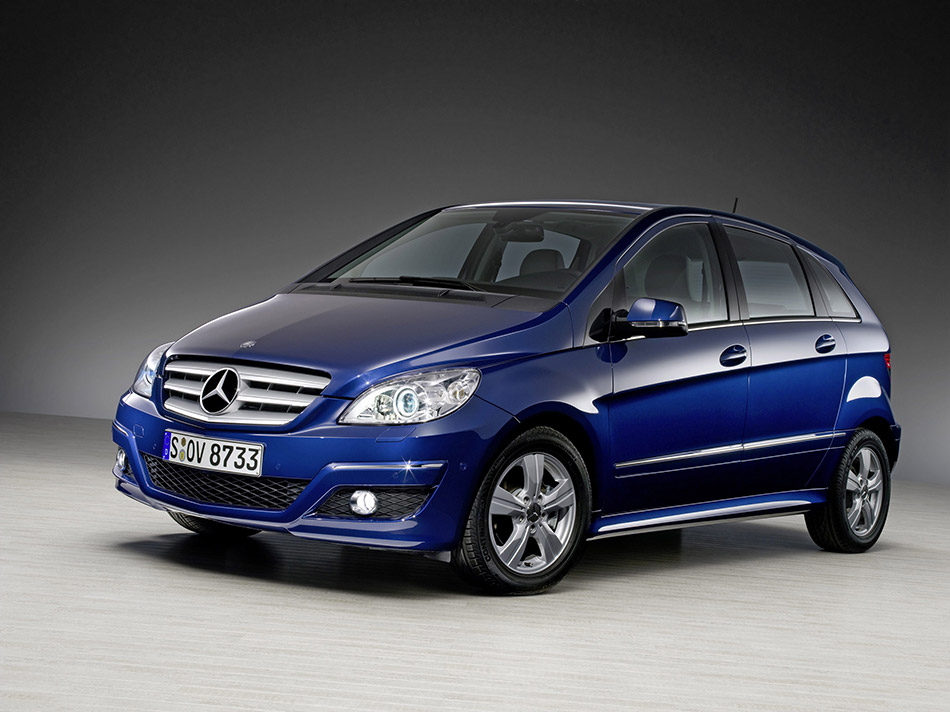 The powerful and fuel-efficient B-Class offers two engine choices. The B200 offers a 134-hp, 2.0-litre inline-4 that can be mated to a 5 speed manual transmission or an optional AUTOTRONIC continuously variable automatic transmission. This engine develops 136 ft-lb of torque at 3500-4000 RPM, and achieves 9.2 litres per 100 kilometres in the city and 7.2 litres per 100 kilometres on the highway.

The 2.0 litre inline-4 in the B200 Turbo boasts an impressive 193-hp, and can be paired with a 6 speed manual transmission or the optional AUTOTRONIC continuously variable automatic transmission. This engine produces 206 ft-lb of torque while still achieving 9.5 litres per 100 kilometres in the city and 7.4 litres per 100 kilometres on the highway.

The restyled front end injects the B-Class with more poise and assurance than ever. This is primarily the result of an updated radiator grille with three chromed cross fins painted in metallic grey and a Mercedes-Benz star integrated into its centre. The new front bumper creates a more imposing appearance for the B-Class, emphasizing the large air intake at the bottom and the modified hood. The overall effect is a look that is broad and powerful and better reflects the sporty attributes of the B-Class.

The rear styling follows the dynamic lines from the front end design. A direct visual link is created by the new two-piece tail light assemblies, whose upper edges merge seamlessly with the character line along the vehicle's sides. This draws the gaze to the tailgate, which now comes with an ergonomically enhanced chrome handle strip, revised handle and a new look rear bumper with load sill guard.

Both the B200 and B200 TURBO models now also offer a sporty new wheel designs, a more car wash friendly shorter exterior antenna and a broader rear windshield that is curved at the sides.

High-class appeal, attention to detail and a sense of spaciousness are qualities that have always been intrinsic to the B-Class. The winning blend of forms, colours and materials team up with the interior's roominess and expansive window areas to produce an inviting ambience. The high seating position improves the driver's all-round view, while the relatively high waistline fosters a sense of security without making the occupants feel confined.

The Mercedes-Benz design team has further upgraded the interior of the B-Class with a new upholstery fabric and a new seat cushion design. The interior door linings also feature a new fabric trim and when ordered with the sports package the side seat bolsters are trimmed in ARTICO man-made leather.

The centre console, tunnel and door panels continue to be bordered by trim strips on both sides and now feature a new, diagonally brushed aluminium in a smoke grey finish to give the interior an added sense of refinement.

The patented sandwich principle, which achieves wonders where economy of space is concerned, is the centrepiece of the safety concept in the B-Class. In fact, almost 70 percent of the body length is available for the occupants and their luggage. Intelligently arranging the engine and transmission in an inclined position partly in front of and partly beneath the passenger cell makes a greater effective front end length available for crash deformation. During a severe frontal impact the drive unit is not moved backwards towards the interior, but instead slides downward along the inclined pedal floor panel. Moreover, the sandwich concept has significant advantages in the event of a side impact collision because the occupants are seated approximately 200 millimetres higher, above the impact zone. This means that despite its compact exterior dimensions, the B-Class provides the level of occupant safety typically found in a Mercedes-Benz.

The comprehensive safety specifications comprised of two-stage front air bags, window-curtain air bags, belt tensioners for the front and outer rear seats, belt force limiters, plus active head restraints in the front, ISOFIX child seat attachment points and head/thorax side bags, are now complemented by the addition of crash-responsive emergency lighting in the passenger compartment. Following an accident of a predetermined severity, the lighting comes on automatically to allow the occupants to get their bearings in the dark and expedite the work of the rescue services.

It is not just the spacious interior, the high-grade materials and the standard automatic climate control that make the B-Class such a pleasure to travel in. The next generation infotainment system plays an important role too. The new Audio 20 unit incorporates a radio with dual tuner, colour display, Bluetooth interface for mobile phones, 6-disc MP3-compatible CD changer, automatic volume adjustment, plus a connection for external audio devices in the glove compartment.

Mercedes-Benz has developed an interactive Media Interface to cater to drivers who have their personal music compilations stored on an MP3 player, a USB stick or any other external audio device. With this optional system, an iPod, USB and Aux-in audio can be linked up to the infotainment system, allowing the device to be operated using the buttons on the multifunction steering wheel and displaying the track titles in both the instrument cluster and the centre console's colour display.

The sophisticated infotainment system may be optionally combined with the 12 speaker harman/kardon LOGIC7® surround sound system, pumping 450 watts of power. This is an increase of 130 watts from MY08 version and transforms the passenger compartment of the B-Class into a concert hall on wheels.