The successful ML 63 AMG will shortly be launched as the especially exclusive "10th Anniversary" variant. The 375-kW/510-hp top M-Class model fascinates with its striking appearance and extraordinary standard features. With the ML 63 AMG "10th Anniversary", Mercedes AMG is celebrating ten years of high-performance SUVs. The ML 55 AMG with a 255-kW/347-hp AMG 5.5-l V8 engine, launched in 1999, is considered the trendsetter and founder of an entire vehicle segment. 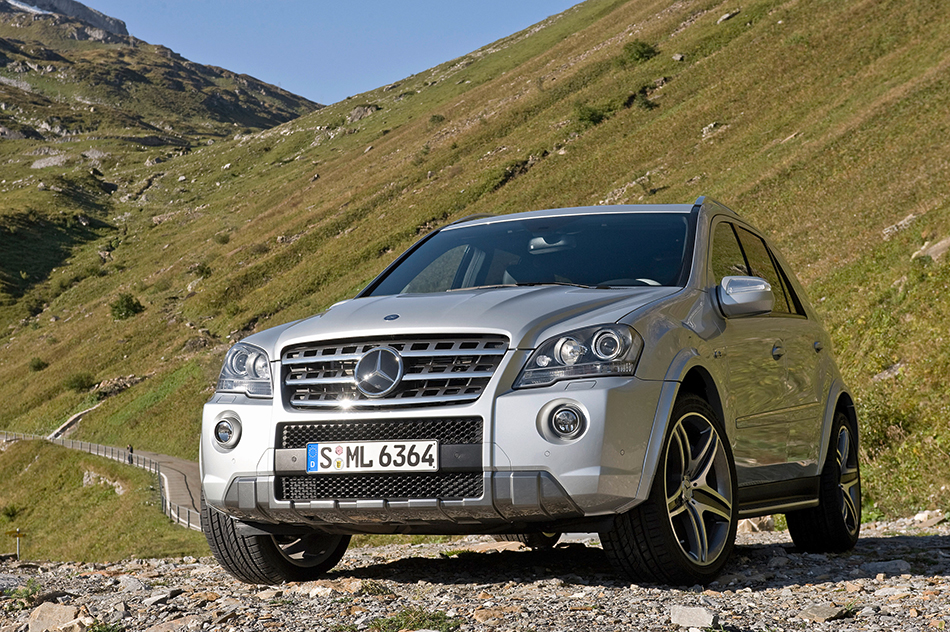 Viewed from the side, the exclusive 21" AMG light alloy wheels with a five-spoke design commands attention: the combination of Himalaya grey paintwork and the high-sheen surface creates a lasting impression. The 10 x 21" AMG light alloy wheels are fitted all round with size 295/35 R 21 wide-base tyres. On the rear end of the ML 63 AMG "10th Anniversary", the underseal in Himalaya grey mirrors the design of the front end.

The AMG sports seats can be adjusted electronically, and feature a multi-contour function and seat heating. A new feature is the exquisite two-tone nappa leather upholstery available in two different colour combinations: black/alpaca grey and black/beige. The AMG sports steering wheel is also two-tone, designed to match the interior colour scheme. Perforated leather covering the grip area ensures optimum handling, and the AMG switch paddles enable manual gear changing. The exclusive tone is emphasised not just by the upper part of the dashboard clad in designo leather and the black roof lining, but also the charcoal poplar wood trim.

The ML 63 AMG "10th Anniversary" will be available to order in spring 2009; the first vehicles will be delivered to customers in summer 2009.

With the new ML 63 AMG "10th Anniversary", Mercedes AMG GmbH is celebrating ten years of AMG high-performance SUVs. The ML 55 AMG, the high-performing top model from the popular first generation of M-Class vehicles, was launched in September 1999 at the International Motor Show in Frankfurt on Main. As the founder of the new "high-performance SUV" segment, the ML 55 AMG quickly became a best seller in the AMG range of models. With a maximum output of 255 kW/347 hp, an engine displacement of 5.5 litres and eight cylinders, the ML 55 AMGoffered a level of driving performance previously unthinkable in this segment: it could accelerate from 0 to 100 km/h in just 6.8 seconds, and had a top speed of 235 km/h. The extraordinary combination of its superior drive train, greater off-road suitability, outstanding driver comfort, unrivalled safety and generous interior delighted AMGcustomers all over the world. Over 11,000 ML 55 AMGs were sold between 1999 and 2003.