Mercedes-Benz has once again significantly upgraded the G‑Class, so reemphasising its position as the leader among off-road vehicles. The interior is characterised by high-quality appointments finished with exquisite materials. The instrument cluster and centre console have been completely redesigned. The driver's field of vision now encompasses a colour screen, between two new round dials. The car features as standard the sophisticated COMAND Online infotainment system, including a navigation system and internet access. New LED daytime driving lamps and new exterior mirrors bring a few discreet changes to the exterior appearance of the luxury off-roader. The range of safety features can be optionally enhanced with the addition of Blind Spot Assist, the parking aid PARKTRONIC and the adaptive cruise control system DISTRONIC PLUS. New to the range are the G 63 AMG with an eight-cylinder biturbo engine and the ECO start/stop system as standard, and the G 65 AMG with twelve-cylinder biturbo engine.

Since it was originally conceived in 1979, as a vehicle to be used primarily in tough off-road terrain, the G-Class has undergone an astounding process of evolution. Over the course of 33 years Mercedes-Benz has refined what was initially a very practically-oriented off-road specialist by giving it a high-class interior and road-going qualities on a par with those of the premium saloons emanating from Stuttgart. The G-Class today is considered the top model among luxury-class cross-country vehicles, and has provided the gene pool for the other very successful SUVs built under the Mercedes-Benz brand. The G-Class has been voted off-roader of the year countless times over the past years – as also once again this year.

A comprehensive range of measures ensures that this classic cross-country vehicle remains in a class of its own in the off-road sector. These measures include new engines, a significantly extended range of appointments, a new, even more luxurious interior and a few discreet external modifications that nevertheless manage to preserve the timeless, classic design – virtually unchanged since 1979 - that has made the G-Class a true automotive style icon.

Dr Dieter Zetsche, Chairman of the Board of Management of Daimler AG and Head of Mercedes-Benz Cars: "Our G-Class has been a force to be reckoned with for the last 33 years. In its latest evolutionary stage, it offers state-of-the-art, powerful engines, a further improved range of luxurious appointments and the very latest safety features, as well, of course, as its now legendary off-road capabilities. At the same time the design remains true to its down-to-earth, unmistakable style."

The instrument panel and centre console have been completely redesigned to include new controls and generously proportioned, exclusively designed trim elements. These give the interior of the car a fresh and classy look. Drivers will now find a TFT colour display in the instrument cluster between the two round dials. A further large colour screen, conveniently positioned in the centre, is part of the COMAND Online system and incorporates a DVD changer and the COMAND Controller, which are standard on all G-Class models. This new infotainment generation offers, amongst other features, a navigation system with special additional off-road functions, the LINGUATRONIC voice-operated control system and Bluetooth wireless connectivity. In order to ensure that the G-Class nevertheless does not lose any of its character, certain specific design elements in the interior have been preserved. The G-Class thus retains the grab handle on the front-passenger side, the switches for the three differential locks – clearly aligned within the driver's field of vision and highlighted in silver-coloured trim – and the redesigned shift lever in the lower section of the centre console. 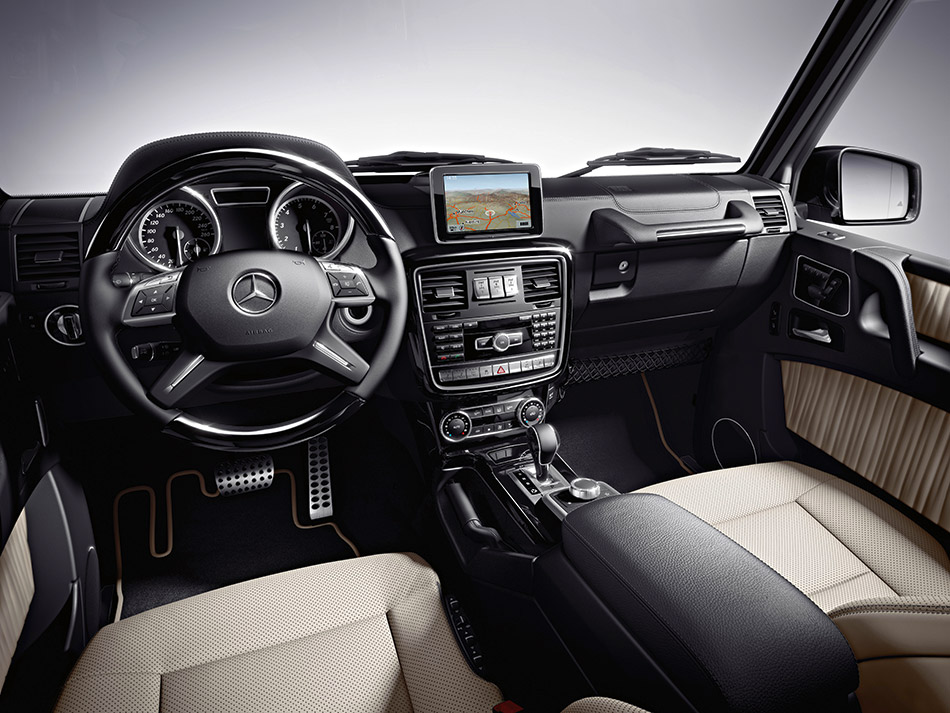 New optional extras include safety features such as DISTRONIC PLUS, Blind Spot Assist and the parking aid PARKTRONIC with reversing camera. The ESP®system has been completely revised and now includes Trailer Stability Assist and a HOLD function.

Further individualisation options from the exclusive designo range are available as enhancements to what is already a very high-quality interior package.

The range of engines in the G-Class includes the G 350 BlueTEC and the G 500, both as a long-wheelbase station wagon, plus the G 500 as a short-wheelbase Cabriolet model.The basic version of the long-wheelbase station wagon model is the G 350 BlueTEC with V6 diesel engine and a displacement of 2987 cc. The four-valve engine has an output of 155 kW (211 hp) at 3400 rpm and has available torque of 540 Newton metres across an engine speed range of 1600 to 2400 rpm. The BlueTEC technology developed by Mercedes-Benz minimises its emissions, in particular of nitrogen oxides (NOx). The G 350 BlueTEC works to even better effect with the addition of AdBlue®, an aqueous urea solution that is injected into the flow of exhaust gases. Refilling with AdBlue®is conveniently done from the outside of the vehicle.

One alternative to the diesel engine is the G 500, with its powerful 5.5-litre V8 petrol engine. This has an output of 285 kW (388 hp) and offers excellent torque of 530 Newton metres. The same engine also ensures that the G 500 Cabriolet has generous reserves of power to deal with any situation.

Both the G 350 and the G 500 feature the 7G-TRONIC PLUS automatic transmission as standard. This sixth generation of the stepped automatic transmission that has been developed and produced by Mercedes-Benz since 1960 has once again been thoroughly revised, and optimised with regard to both consumption and comfort.