The Porsche 911, the first presentation of which dates from the year 1963, i.e. meanwhile fifty (!) years ago, has indeed nothing lost of its myth. Thus it is not at all surprising that it is now available in its seventh generation, namely since September 2011 under the designation 991. But the KTW Tuning team from Hildesheim, Germany, shows that it is nevertheless possible to considerably optimize this nearly perfect bolide. 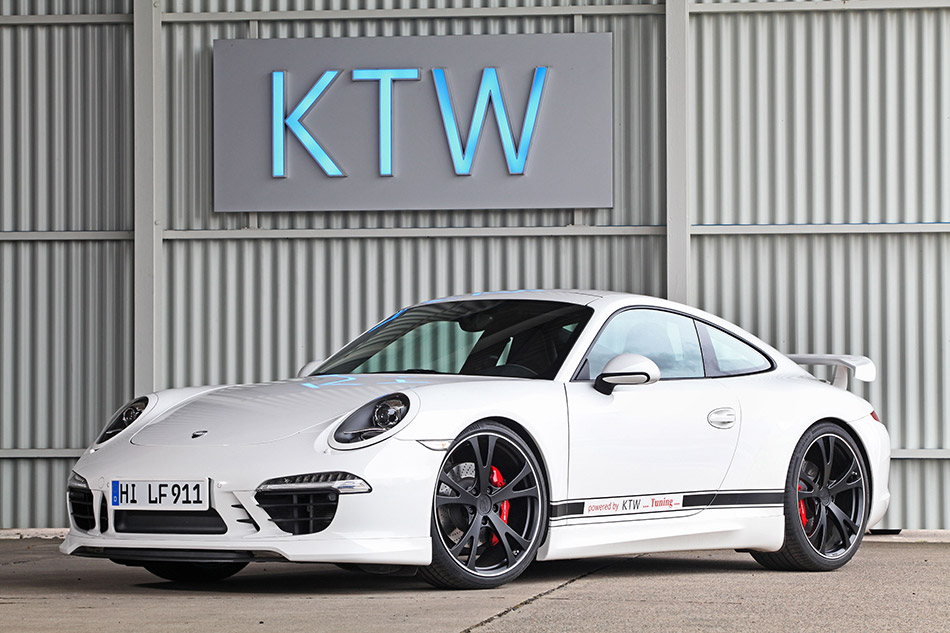 The rear-wheel driven Carrera S Type 991 with 3.8 liters six cylinder boxer engine offers 400 HP with 440 Nm of max torque already in serial state, being, only because of this fact, predestined to attract attention on elegant German promenades or on the world famous Croisette of Cannes likewise. Particularly since this white 911 successor has been equipped furthermore by a sophisticated body kit from the renowned Leonberg Porsche refiner TECHART. To mention all the tuning related details would go largely beyond the scope of this small article. Just let us pay attention at least to the modified car front, the optimized exterior mirrors, side skirts on both sides, the set of superb FORMULA III forged rims in 21 in. with powder coated in one's desired color fringes together with the TECHART-own nose lift system (making the ordinary daily "hurdles" lose their scare), the rear spoiler in combination with a top spoiler and the reshaped car tail together with the exhaust system now with valve control.

Also several parts of the interior, as the steering wheel, the board instruments, the seats, dashboard, center console etc. had to go through many modifications. One of the highlights are without any doubts the red safety belts, but also the pedals and feet mats have their own flair. As one can see, KTW has nothing skipped, which could hamper the bolide from the Swabian Zuffenhausen to have a worthy appearance, not to speak at the end about its absolute state to be unique.