The sixth generation of the iconic Mercedes-Benz SL is being launched in May 2012 (2013 SL550 - 429 hp, 516 lb-ft, MSRP: $105,500) with an all-new lightweight aluminum unit body, new levels of driving refinement, even more useful technology and a redesigned version of its well-known retractable hardtop.

While the sleek Mercedes-Benz SL550 for the 2013 model year is about two inches longer and wider, its aluminum frame is more than 200 pounds lighter than the previous model. Most of the body panels are also aluminum, and high-strength steel is used in the roof pillars. Overall, the new SL body is about 20 percent stiffer than the car it replaces. 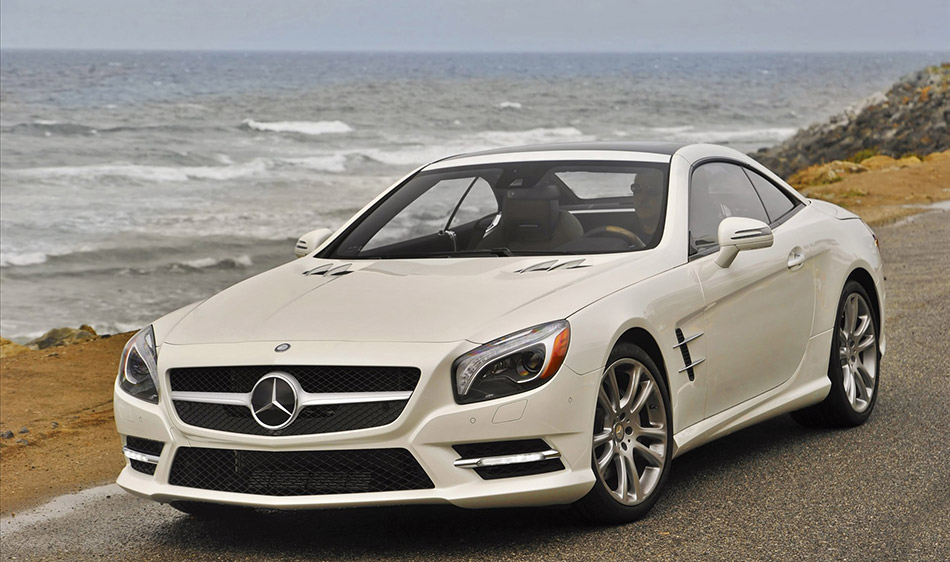 60th Anniversary of the Mercedes-Benz SL

The debut of the sixth-generation SL coupe/roadster in 2012 marks the 60th anniversary of the iconic Mercedes-Benz SL. Initially intended as nothing more than an abbreviation for "super" and "light," the name "SL" has been the best-known model in the Mercedes-Benz line for 60 years.

The first-ever SL was a race car, totally unlike its contemporary sports/racing cars of 1952. With its innovative tubular space frame, teardrop-shaped aluminum body and gullwing doors, the 300SL caused a stir in the motorsports world. Winning both Le Mans and the famed Carrera Panamericana that year made the 300SL race car's debut season a sensation.

To the surprise of many, the company began production of the road-going SL with a directfuel- injection engine in 1954, debuting the production 300SL Gullwing not in Frankfurt, Paris or even in Europe, but in New York. This started a lasting legacy of exciting SL sports cars from Mercedes-Benz. Based on the 300SL Gullwing coupe, the convertible 300SL roadster was launched in 1957. These two cars are sometimes compared to the modern-day SLS AMG gullwing and roadster models. And, not unlike today's SLK, the 190SL - a smaller, less expensive convertible that debuted in 1955 - was marketed in parallel with the 300SL.

Under its refined skin, the Mercedes-Benz SL550 is powered by an efficient and refined new V8 engine that gets up to 14% better fuel economy while producing more power - an astounding feat, considering that increasing power or fuel economy is usually an either-or scenario. The V8 features direct fuel injection, twin turbochargers and multi-spark ignition.

The new Mercedes-Benz SL550 engine comes with an innovative ECO stop-start system. Whenever the car stops with the brake pedal depressed, the engine is automatically turned off to save fuel. As soon as the driver touches the accelerator pedal, the engine computer selects the piston that is in the best position for first ignition, and the direct fuel injection and multi-spark systems work with a starter motor to seamlessly re-start the engine.

Inside the new SL, a standard harman/kardon Logic 7 digital surround-sound system features the new FrontBass®, in which the bass speakers are mounted in the front firewall so the two front frame members also serve as large bass boxes. This natural amplification makes the system one of the best in its class, and saves weight in the process, since separate bass boxes are no longer necessary.

The harman/kardon audio system comes with Dolby Surround 5.1 and uses two amplifiers with a total of 600 watts to power 14 speakers. All amplifier channels have individually tuned frequency response, and the system includes speed-dependent volume control.

The wiper arms and blades in the new SL feature laser-cut passages along the entire length of each blade, distributing washer fluid directly in front of the moving wiper blades. A separate electronic control unit ensures that washer fluid changes its flow each time the wipers change direction.

This targeted washer fluid improves cleaning without impairing driver visibility during the spray process, and the control unit also changes the amount of washer fluid as vehicle speed and outside temperature change. Finally, the volume of washer fluid is reduced automatically when the top is down, so occupants can clean the windshield without getting sprayed.

A standard Panorama sunroof consists of a see-through polycarbonate roof panel with a manually operated roller blind. Optional MAGIC SKY CONTROL features a glass roof panel, in which the tinting of the panel can be controlled by the driver or passenger. In an instant, a button above the rear-view mirror can change the roof panel from transparent to heavily tinted, using technology similar to automatic dimming mirrors.

Mercedes-Benz was the first manufacturer to make emergency calling a standard feature, and the new SL marks the debut of mbrace2, the next generation of telematics innovation that gives drivers top-of-the-line features related to safety, infotainment, personal assistance and vehicle care. It includes the ability to remotely update all software modules via cloud networks, so mbrace2 users always have the latest technology in their vehicles and at their fingertips. New services are also added to the mbrace2 Mobile Application, which is compatible with both iPhone and Android smartphones.

In addition to mbrace2, its pop-up roll bars and a myriad of other electronic safety systems have led many to label the SL as "the world's safest convertible." Its crash avoidance systems include ATTENTION ASSIST, DISTRONIC PLUS, PRE-SAFE Brake and ESP stability control as well as Active Blind Spot Assist and Active Lane Keeping Assist. In a collision, occupants are protected by its high-strength aluminum body, smart front airbags, knee bags, and headthorax bags, seat belt tensioners, belt force limiters and sensor-controlled roll bars (a Mercedes-Benz invention in the fourth-generation SL).