The new Mercedes-Benz SLS AMG GT boasts enhanced driving dynamics and even better race track performance. With a maximum output of 435 kW (591 hp), the optimised AMG SPEEDSHIFT DCT 7-speed sports transmission and the redeveloped AMG RIDE CONTROL Performance suspension, the SLS AMG GT – which is available both as a Coupé and a Roadster – has raised the bar even higher. As a further highlight, the new high-quality AMG designo Exclusive STYLE leather is now also available as an optional extra for all SLS AMG models. According to Tobias Moers, Board Member and Head of Overall Vehicle Development for Mercedes-AMG GmbH: "The new SLS AMG GT demonstrates the sort of potential which lies in AMG's super sports cars. With its even higher levels of performance, the SLS AMG GT excites out on the race track in particular by providing an emotionally enjoyable and passionate driving experience."

Masculine and decidedly athletic: with darkened headlamps and tail lights as well as red-painted brake callipers, the new SLS AMG GT also features a unique look. The wing-shaped cross fins and the star recess in the radiator grille also retain a high-gloss finish, as do the exterior mirrors and the fins on the bonnet and wings. The AMG logo on the right of the boot lid also features the additional letters "GT".
One look at the technical specifications highlights the fact that AMG has succeeded in enhancing the dynamic profile of the SLS AMG GT even further. The maximum output of the AMG 6.3-litre V8 front mid-engine is 435 kW (591 hp) at 6800 rpm, while the maximum torque is 650 Nm at 4750 rpm. The SLS AMG GT accelerates from zero to 100 km/h in 3.7 seconds, and can reach a speed of 200 km/h in 11.2 seconds. 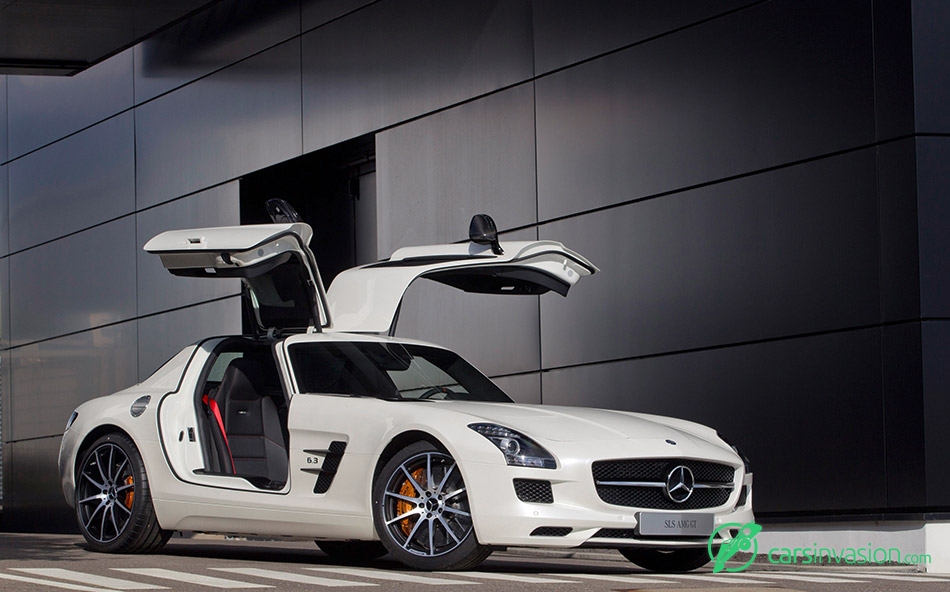 Mercedes-AMG has achieved the output of 435 kW (591 hp) through in-engine dethrottling measures in conjunction with an increase in peak pressure. The GT version of the AMG 6.3-litre eight-cylinder front mid-engine responds with even greater agility to accelerator pedal movements and excites with even sportier-tuned performance characteristics. The AMG SPEEDSHIFT DCT 7‑speed sports transmission located on the rear axle is more direct and spontaneous in the manual "M" transmission mode: thanks to newly developed gear change functions and optimised transmission control, it has been possible to shorten reaction time significantly. When changing gears manually via the real metal shift paddles on the AMG Performance steering wheel, control commands right through to the noticeable gear change are executed markedly quicker than previously – all of which is ideal when striving to achieve some ambitious lap times on a closed-off race circuit.

The reaction time experienced by the driver is made even more emotional as a result of more distinct gear changes. The automatic double-declutching function when shifting down is also more pronounced in the SLS AMG GT. Due to an increase in engine torque in manual mode, the shift procedure is even quicker than previously – and is accompanied by some passionate acoustic feedback for the driver. Overall, the optimisation of the dual clutch transmission complements the sporty nature of the SLS AMG GT perfectly.

But it is not just the AMG 6.3-litre V8 front mid-engine and the optimised dual clutch transmission which are responsible for increasing the driving dynamics of the SLS AMG GT. The newly developed AMG RIDE CONTROL Performance suspension also enhances the vehicle's sportiness. In the case of the SLS AMG GT, Mercedes-AMG has combined the sophisticated suspension layout with twin aluminium wishbones all round and variable, electronically controlled damping. Compared with the AMG RIDE CONTROL sports suspension, the new AMG RIDE CONTROL Performance suspension features basically stiffer spring/damper tuning and dispenses with "Comfort" mode.

"Sport" mode is recommended as the optimum setting for undulating road surfaces and routes requiring increased suspension travel – such as found on rural roads or the legendary North Loop of the Nürburgring, for example. The control algorithm of the AMG RIDE CONTROL Performance suspension reacts best to fluctuations in the road surface with a tendency towards lower damper force levels. The resulting effect is the best possible performance by effectively preventing rolling and pitching and providing excellent contact with the road when adopting a sporty driving style. The enhanced driving dynamics and even better race track performance are measureable: as part of an internal comparison with the SLS AMG, the SLS AMG GT was able to achieve faster lap times on a race track.

"Sport plus" provides higher damping forces and features specific control algorithms which have been adjusted for a decidedly sporty driving style on routes with a level road surface - such as when trying to achieve ambitious lap times on a race circuit such as Hockenheim.