Mercedes-Benz has completely revised the Saloon and Estate models of the E-Class. As a result, the new E-Class has made a significant step forward when it comes to efficiency and ecology. This comes courtesy of new, powerful BlueDIRECT four-cylinder petrol engines featuring sophisticated direct injection technology, a new, efficient six-cylinder engine as well as even more economical diesel engines. In both the Saloon and Estate models, new or optimised assistance systems from the future S-Class are celebrating their world premiere. This powerful development boost is reflected to exciting effect in the design of the E-Class. With a new front, new bumpers, and revised side view, it encapsulates efficiency, intelligence and emotional appeal in a visually superior manner. In this way the E-Class is securing its leading position in the luxury class vehicle sector at the very highest level: dynamically elegant, it combines intelligent technology with superior style.

The Saloon and Estate are continuing the success story of the E-Class. More than 600,000 examples of the current E-Class Saloon model series have been sold worldwide, and no fewer than 100,000 customers have already opted for the latest version of the Estate. The models of the E-Class are therefore making a significant contribution to the growth of Mercedes-Benz, and are setting clear standards in the areas of safety, design, quality and efficiency. 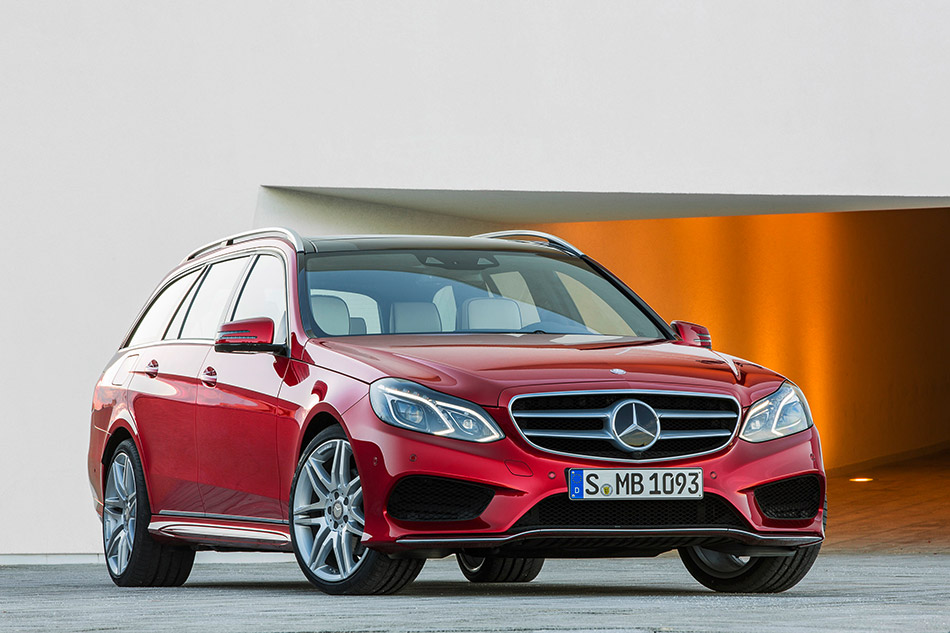 For the first time, the E-Class is available with two different front ends: the basic variant and ELEGANCE equipment line come with the classic, three-dimensional Saloon grille with 3-louvre look and Mercedes-Benz star on the bonnet. The AVANTGARDE equipment line, on the other hand, incorporates the sporty front end with central star, and as such boasts an independent, front-end look with a sporty emphasis.

The headlamps have been redesigned and comprise all functional elements with a single headlamp lens. The low-beam headlamps and the daytime running lamps feature LED technology as standard. Full LED headlamps are also available as an option for the first time in this class.
A modified side view with new feature line and repositioned trim strip make both the Saloon and the Estate appear longer. Overall the E-Class not only looks more elongated, but also more elegant yet at the same time dynamic.

Both the E-Class Saloon and Estate are available with a broad range of powerful and efficient petrol and diesel engines – all fitted with ECO start/stop function. New units include the BlueDIRECT four-cylinder petrol engines in the E 200 and E 250, featuring the same sophisticated technology used in the latest six-cylinder engine from Mercedes-Benz. Both of the four-cylinder petrol engines meet the future EU6 standard, while the E 250 even complies with the strict criteria of efficiency class A.

The six-cylinder petrol engines in the E 300 and E 400 are also state-of-the-art – and for the first time feature a biturbo drive. The same advanced engine technology enables the V8 in the E 500 to achieve outstanding levels of performance and efficiency.

The four cylinder diesel engines in the E 200 CDI, E 220 CDI and E 250 CDI, well known for their efficiency and featuring the latest injection technology, are now even more economical, thanks among other things to a revised drive train. This is also the case for the E 300 BlueTEC HYBRID, currently the most economical luxury-class saloon, which in addition to the four-cylinder diesel engine also has a 20 kW (27 hp) electric motor under the bonnet.

The V6 diesel engines in the E 300 BlueTEC and E 350 BlueTEC have been revised and fitted with environmentally friendly and efficient BlueTEC technology, such that they currently already meet the future EU6 emissions standard. Virtually all of the E-Class models with diesel engines fall into efficiency class A, while the E 300 BlueTEC HYBRID is even classified in efficiency class A+.

In the main markets, both the Saloon and Estate models are fitted as standard with COLLISION PREVENTION ASSIST, a radar-based collision warning system with adaptive brake assist systems. Also forming part of the standard equipment is ATTENTION ASSIST, which is now able to warn of inattentiveness and drowsiness across a wider speed range, and also inform the driver about his level of fatigue and the amount of driving time which has elapsed since the last break.

In addition, also optionally available in the new E-Class are a number of additional assistance systems which are mostly new or now feature significantly extended functions.