TSS Tuning GmbH, a company domiciled in the Swabian region of Kirchheim-Teck, was launched in the spring of this year with the new label "Minitune". True to its name, the new brand has committed completely to the upgrade of vehicles of the model portfolio of the German premium compact car producer with British roots that has meantime, become highly impressive. For instance, the styling experts of Minitune tailored a fashionable outfit on the bodywork of the MINI Cooper S of the construction series R56 (shown here) that was rolled out recently.

The company's own Minitune body kit consists of a front spoiler bumper bar with big inlets, a black front grill, side skirts and a rear apron in diffuser optics and roof spoiler in racing looks. Moreover, Minitune integrated an air inlet with a distinctively formed scoop, in the engine hood.
In contrast to the abundant regular chrome on the MINI as a proven retro-character in standard production, Minitune consistently lacquered every reflective surface in glittering black, to give it its unmistakable more sporty appearance. Dark LED rear lights and fog tail lamps in Union Jack design were also applied on the rear – after all, deep in its heart the MINI will always remain British. 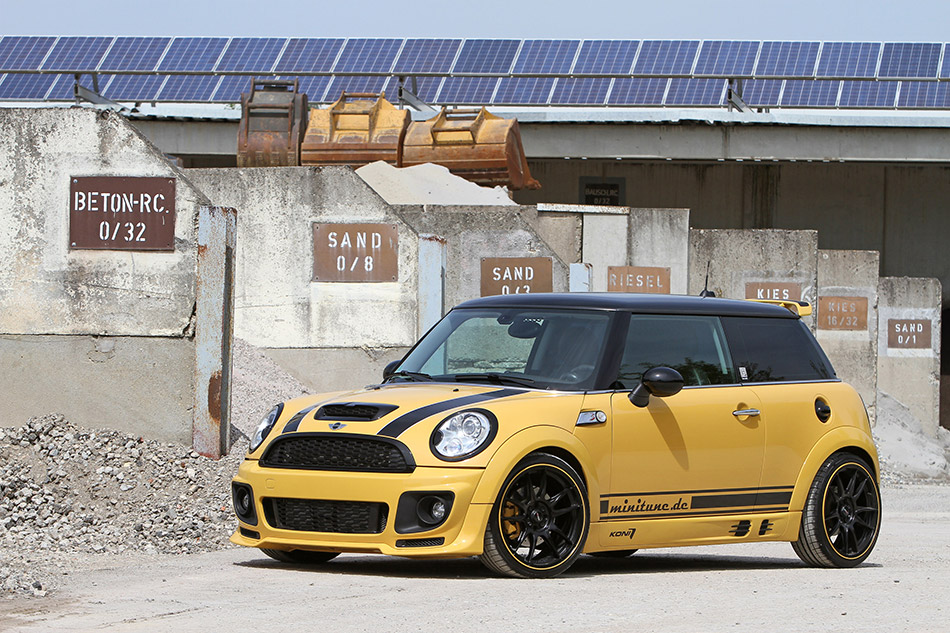 To match the resultant color of the bodywork, Minitune endowed the Cooper S with a set of Motec Nitro single piece in black with outline in matching car color. The lightweight 8x18-inches wheels were covered all-round with Kumho tires of the dimension 215/35R18.

Lighting up behind the black rim stars are the brake calipers that are also painted in the matching car color and act on the perforated EBC turbo groove brake disks on the front axle with EBC red stuff brake pads.

The brake upgrade is not a matter of coincidence but a sheer reasonable counterweight to the performance boost from the hitherto 174 horse power / 240 Nm to its present 218 horse power / 319 Nm that was achieved in the aftermath of the optimized engine electronics. Moreover, Minitune also installed a better high-performance charging air intercooler, which teases out a few more horse power from the super lively 1.6-liter turbo engine.

The Minitune sports exhaust system made of stainless steel including the 200-cell sports catalyzer, which smatters from its centrally positioned double tailpipes ensures the sound background to match the evolved performance.

Last but not the least, Minitune endowed Cooper S with a sports chassis frame from the specialists of Koni, which combines an additional boost of the MINI-typical agility with an astounding driving comfort.