After thrilling automotive enthusiasts for more than two decades and four generations of vehicles, the legendary Mitsubishi Eclipse sports coupe will cease production after the 2012 model year.

And while this two-door Japanese classic car (manufactured with pride at Mitsubishi's state-of-the-art manufacturing facility in America's Heartland in Normal, Illinois) will soon fade off into the sunset, the swan song Eclipse Coupe will depart with a memorable, aesthetically pleasing final version that captures the sporting essence of what owning a cool sports car is all about.

When you look at the special edition 2012 Mitsubishi Eclipse SE model, you see a truly inspired sports car. Its aggressive trademark dynamic body is very unique, with its convex streaming roofline sloping all the way down to its protruding, athletic flared fenders. There is a reason that, aesthetically-speaking, the Eclipse long overshadowed its competition. The front fascia of the 2012 Eclipse SE showcases blacked-out upper and lower grille sections that match the ominously dark blacked-out roofline. The rear dual exhaust outlets let others know that underneath the stylish body, the Eclipse is hiding a powertrain built to go fast. Unique "SE" side decaling, blacked-out side view mirrors and 18-inch alloy wheels with a dark argent finish round out this model's eye-catching exterior. 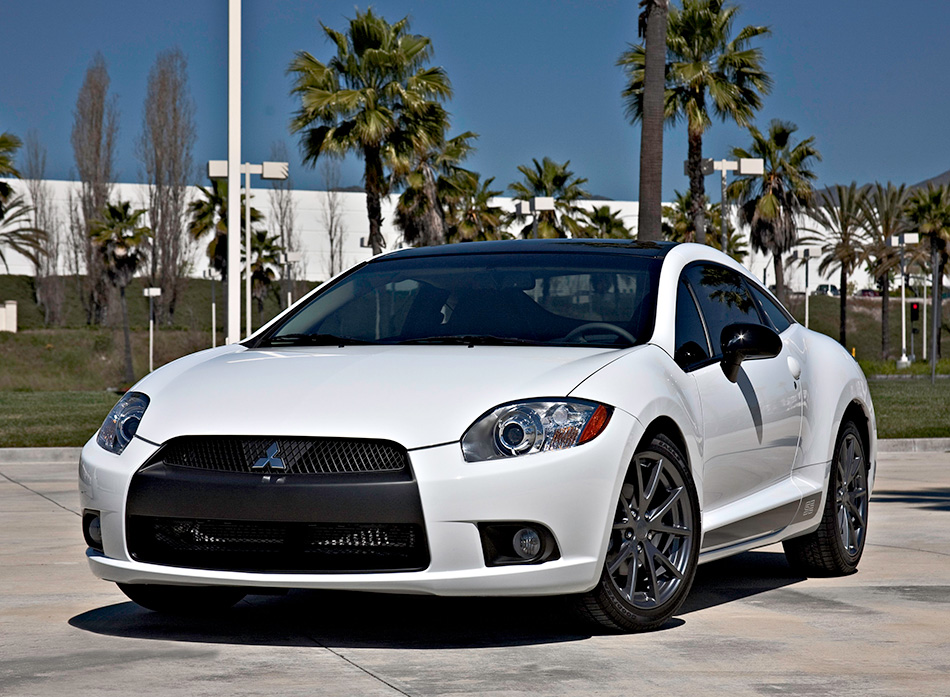 Underneath the hood of every 2012 Mitsubishi Eclipse Coupe GS, GS-Sport and SE series vehicle lies and intensely beating heart in the form of a 2.4-liter SOHC 16-valve 4-cylinder engine with a cast-iron engine block that makes use of Mitsubishi Intelligent Valve timing Electronic Control (MIVEC) to maximize power production, fuel economy and reduce exhaust emissions. This engine cranks out 162 horsepower at 6,000 rpm and 162 lb.-ft. of torque at an even 4,000 rpm, with redline occurring further across the tachometer at 6,500 rpm.

The GS is available with a 5-speed manual transmission or 4-speed Sportronic® automatic transmission, the latter unit allowing the driver to quickly ratchet up and down through the gears to their heart's content - an especially desirable feature when an enthusiast driver encounters a winding ribbon of road. The GS-Sport and SE come equipped with a 4-speed version of the Sportronic® automatic gearbox.

Mitsubishi engineers understand the need for speed. That's why they cranked up the power by nearly 40% in the Eclipse GT with the inclusion of a 265 horsepower 3.8-liter MIVEC-equipped V-6 engine for performance-minded drivers. This engine reaches its horsepower apogee at 5,750 rpm and produces its peak torque figure of 262 at 4,500 rpm.

To complete the sporting enthusiast driving experience, the Eclipse GT comes with an exclusive 5-speed Sportronic® automatic transmission that adds an additional cog, allowing the driver to maximize driving performance.

The 2012 Eclipse Coupe comes in four distinct models and price ranges to suit a variety of new car buyer budgets:

Also standard on 2012 Eclipse coupe is the special black painted roof that is a throwback to the first-generation Eclipse.

We all want to indulge in the finer things in life. That's why Mitsubishi has added welcome deluxe features to the 2012 Eclipse GS Sport model. Open up the one-touch power glass sunroof with vent feature on sunny days or moonlit nights. Crank up the sensuous sounding 650-watt Rockford-Fosgate® premium audio system with 9 speakers (including a 10-inch subwoofer), 6-disc in-dash CD player and a pre-paid 3-month subscription to SIRIUS® satellite radio. Cut through the darkness with High-Intensity Discharge (HID) projector-type headlights with fog lamps. Stay warm and comfortable with leather-covered seats (front seats heated) and a 6-way power driver's seat. Chat away on a call without a problem with the Bluetooth® hands-free phone system. And enjoy an added dimension of safety when backing up thanks to the rearview back-up camera.