A stylish and sleek-looking vehicle whether its top is up or down, even the most rabid sufferer of arachnophobia will love the 2012 Eclipse Spyder mid-size convertible luxury sports car, a sharp-looking soft-top convertible that comes loaded with a bountiful array of luxurious high-end features at no additional cost to the consumer. What's more, countless drivers will blush as they enjoy the luxuries of this open-top grand touring roadster at a fraction of the cost of its competitors. And with a starting MSRP of only $27,999, you can bet that savvy car shoppers will look forward to getting tangled in this Spyder's web. 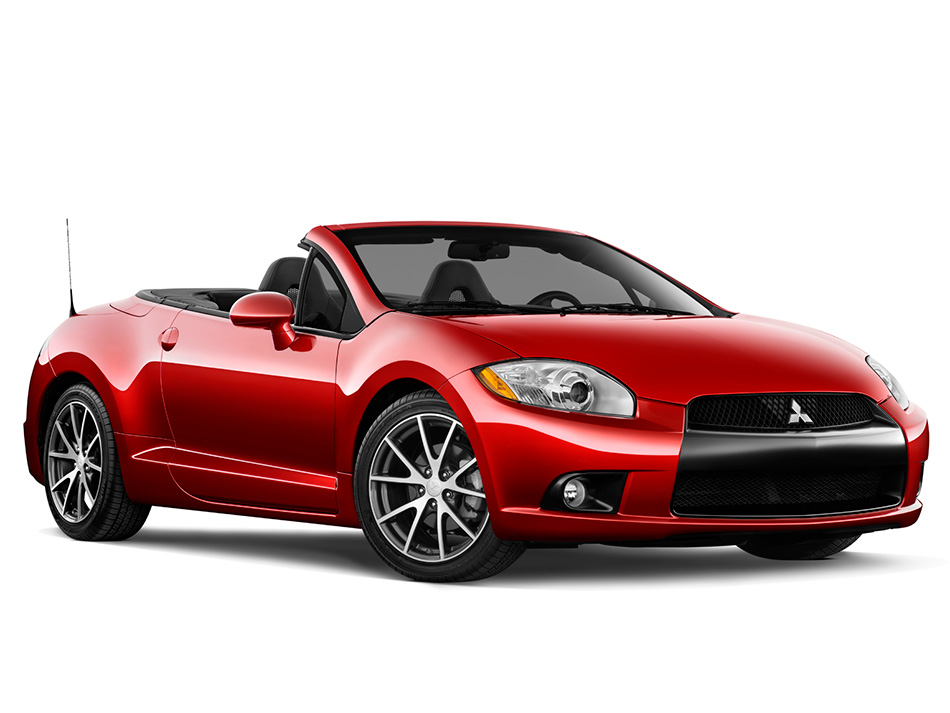 The Eclipse Spyder GS Sport and SE vehicles are powered by a refined dynamo of a drivetrain - a 162 horsepower 2.4-liter SOHC 4-cylinder engine that makes use of the Japanese auto manufacturer's elaborate Mitsubishi Intelligent Valve timing Electronic Control (MIVEC) variable valve-timing system that helps elevate both the power output and fuel economy while simultaneously reducing harmful exhaust emissions. This engine features a fortified cast-iron engine block, a bore and stroke measuring 3.43 x 3.94 inches, and a lofty compression ratio of 9.5:1 that help it to produce a full 162 lb.-ft. of torque at 4,000 rpm. Despite all of this horsepower and torque, the Eclipse Spyder still manages to achieve exceptional fuel mileage within the EPA-rated fuel consumption of 20 mpg city/ 27 mpg highway. What's more, this engine achieves this level of power production and fuel efficiency on regular unleaded gasoline - a helpful design feature that can help the car's owner to save more money at the gas pump. This engine delivers its power to the vehicle's front wheels through a slick 4-speed Sportronic® automatic transmission.

For the enthusiast driver that demands even more potency and speed, the 2012 Mitsubishi Eclipse Spyder GT is the obvious choice as it offers a substantially higher 40% more power output than the previously mentioned 4-cylinder powerplant in the form of a souped-up 265 horsepower 3.8-liter SOHC 24-valve V-6 engine that, just like that of its GS Sport and SE siblings, that includes Mitsubishi's impressive MIVEC variable valve-timing system. Key design elements of this V-6 engine include a peek torque figure of 262 lb.-ft. at 4,500 rpm, a bore and stroke of 3.74 x 3.54 inches, a compression ratio of 10.5:1, with the engine's redline occurring at 6,500 rpm. The 2012 Mitsubishi Eclipse Spyder GT gets an EPA-rated 16 mpg city/24 mpg out on the highway on premium gasoline, which is recommended to maximize performance.

The GT sees an additional gear added to its performance-oriented 5-speed Sportronic® automatic transmission. Mitsubishi's Sportronic® design technology allows the driver the option for quick gear shifts with a slight tap of the smart INVECS-II adaptive shift control. This system is so sophisticated that it learns and adapts to the habits of the driver.

The Spyder is built off of Eclipse coupe chassis, but numerous additional structural reinforcements have been integrated into its chassis to create rock-solid platform with an incomparable degree of structural integrity whether the vehicle's top is up or down.

With the top up, the vehicle's occupants are treated to an exceptionally quiet cabin, thanks to the thick high-quality multi-layer cloth top with an interior headliner that closely mimics that found in its twin sibling, the Eclipse coupe. This soft top is fitted with a glass rear window that includes a built-in defroster.

As if cruising around in comfort in an affordably-priced convertible sports car with head-turning styling were not enough, Mitsubishi has infused the 2012 Eclipse Spyder with any number of thoughtful high-end amenities at no additional cost.

Let your hair blow in the wind and crank up the tunes with the beautifully resonating 650-watt (max) Rockford-Fosgate® 6 CD/MP3 audio system with 9-speakers and a three-month pre-paid subscription to SIRIUS® Satellite Radio. Keep your hands on the steering wheel and chat away with the Bluetooth® hands-free phone system. Cut through the darkness thanks to High-Intensity Discharge (HID) projector-type headlamps.

See what is going on behind the vehicle more clearly with the rear view back-up camera. Enjoy top-down touring even on cool mornings or chilly evenings, thanks to the warmth and comfort provided with heated leather front seating surfaces.

And while this two-door classic Japanese convertible sports car (manufactured with pride at Mitsubishi's state-of-the-art manufacturing facility in America's Heartland in Normal, Illinois) will soon fade off into the sunset, the swan song Eclipse Coupe will depart with a memorable, aesthetically pleasing final version that captures the sporting essence of what owning a cool sports car is all about.

The special edition Eclipse Spyder SE comes with all of the accoutrements on the GS Sport model plus unique 18-inch alloy wheels with dark argent finish, black side view mirrors and special "SE" side decaling.

The GT edition gains the aforementioned detachable windscreen deflector to decrease wind noise and buffeting when driving with the top down as well as an automatic climate control system.

Safety is always at the forefront when Mitsubishi's engineers and designers develop a vehicle. That's why the 2012 Eclipse Spyder features a bounty of the latest safety technologies and amenities to provide piece of mind to the purchaser of this appealing top-down luxury sports car.

Included on every unit sold is an advanced supplemental restraint system (front air bags, front-seat-mounted side impact air bags, and front seat-mounted head/thorax side impact air bags). Front and rear crumple zones help to protect the vehicle's occupants from impact forces in the event of a crash. Three point seatbelts, head restraints, and a seatbelt force limiter system help the seatbelt and air bags work together seamlessly. Another safety measure are the front seatbelt pretensioners, which are designed to help tighten the belts on frontal impact.

Anti-theft alarm system and engine immobilizer with a keyless entry system and a remote trunk and panic alarm are standard features on the 2012 Eclipse Spyder series.