"Cars with heritage have the brightest future!" according to Roland Mayer, Managing Director of MTM GmbH in Wettstetten, referring to the latest off-spring born of MTM's engineering prowess, the S8 Talladega. The vehicle appears both imposing and svelte when parked up but packs a hammer punch with no less than 760PS at 5,950 rpm.. The maximum torque of 945 Nm is developed evenly between 1700 and 5500 rpm, and all who enjoy this immense power will be thankful for the quattro 4-wheel drive transmission.

Audi engineers also exploited this advantage on 24 March 1986, when they unleashed an Audi 5000 CS Turbo on the Talladega Speedway in Alabama in pursuit of a record. The US model, better known in Europe as the Audi 200 Turbo, was powered by a 2.2 litre, 5-cylinder turbocharged engine with five valves per cylinder producing 650 PS. The prize: the Audi averaged 332 km/h around the banked oval track and attained a top speed of 350 km/h on the straight. 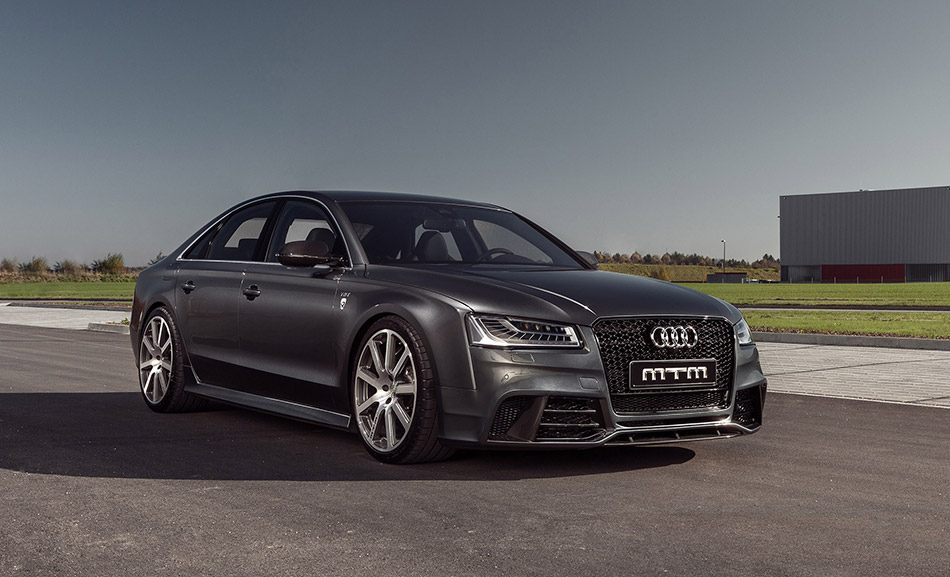 The new MTM S8 Talladega's raison d'etre is not to break this record, but to grant 25 select individuals, in celebration of the 25 anniversary of the founding of the company, a particularly sublime experience of personal mobility. The S8 combines and luxurious ambience and supreme power using components honed to the finest level. Its swiftness is derived from MTM time-honoured tuning methods; the power unit is based on the RS6's eight cylinder engine, boosted with modifications to turbochargers, exhaust system and cooling capacity. The MTM team has also modified the gearbox software to reset the up-shift points to 7000 rpm. The performance figures speak for themselves: the MTM S8 Talladega blasts from 0 to 100 km/h mph in 3.48 seconds, passing the 200 km/h mph mark in 10.51 seconds and reaching its top speed at 325 km/h. Top speed is then limited out of consideration for the road-legal tyres. Carbon-ceramic brakes all round ensure suitable deceleration from any speed. "Configured for fast laps on the Nardo Ring, exceeding 350 km/h would be no problem", says Roland Mayer, spelling out the extreme potential of the MTM S8 Talladega.