With increased passenger and cargo room, a larger, more powerful engine, a new standard driver-side sliding rear door and fresh, sophisticated styling, the all-new 1999 Nissan Quest continues where the original Quest left off – as a benchmark design in its class.

Like the first generation, which was noted for its convenience and car-like ride and handling, the new Quest offers an exceptional combination of minivan utility – including seven-passenger seating and flexible cargo space – and sedan-like comfort, performance, safety and amenities.

Outer body dimensions have been stretched 4.6 inches in length and 1.2 inches in width. As a result, the new Quest gains 9.6 cubic feet of overall cargo volume for a total of 135.6 cubic feet. Height and wheelbase remain unchanged, helping maintain Quest's maneuverability and ease of parking.

The Quest was styled at Nissan Design International, Inc. (NDI) in La Jolla, Calif., creators of the original Quest, Infiniti J30, Nissan Altima and other award-winning vehicles. The body is an all-new design with no carryover panels. 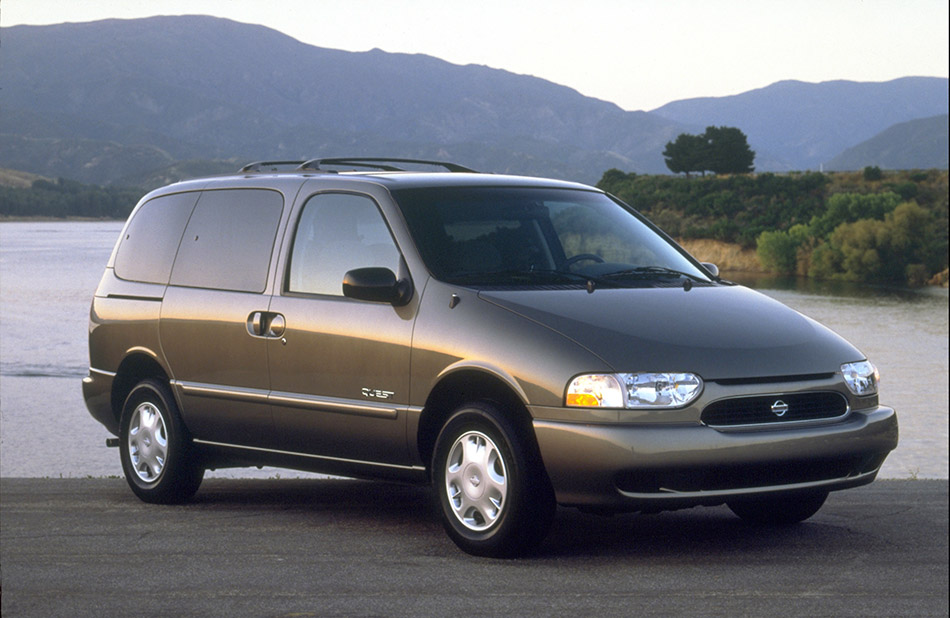 Building on Nissan's fun-to-drive heritage, the designers added sophistication and a "tailored," polished look inside and out. The new front end features a round, chromed grille opening reminiscent of the J30, while new multiparabola headlights with crystalline lenses add a luxury appearance.

NDI also created the stylish new Quest interior, designed to offer car-like amenities and increased usable space. One of the many innovations found in the Quest interior is an available, industry-first multi-adjustable Quest Smart Shelf that quickly can be adjusted to create separate compartments for strollers, grocery bags and other items. A built-in mesh net helps secure the items on the shelf. The Quest Smart Shelf was inspired by consumers participating in NDI's unique "Design Context Lab," a research process that observes owners interacting with their vehicles – rather than just talking about them.

Up to 24 different configurations are available with the bench seat and 66 with the second-row captain's chairs.

The Quest instrument panel organizes functions on a natural arch, following the instinctive reach of the driver's hands from the steering wheel to the controls and switches. Controls for the Quest's advanced audio unit were moved above the heating and air conditioning unit because of their more frequent use.

The designers sought to take advantage of enhanced interior space through use of "human touches," including revised cupholder placements, the addition of new storage compartments, a cargo net between the front seats and the use of luxury features such as available dual position memory driver's seat and outside mirrors and HomeLink® Universal Transceiver garage door opener system. In total, there are up to 31 storage areas throughout the cabin, including room for coins, cups, credit cards, cassettes and CDs.

A new replaceable carbon microfilter (standard on SE and GLE models and optional on GXE) filters 100 percent of the air coming into the interior and removes up to 90 percent of outside particulates.

New too is an automatic on/off headlight system (standard on GLE and optional on SE), which can be set to sense when it's getting dark and automatically turn on the Quest's headlights. It can provide up to 2.5 minutes of illumination after the headlights are turned off, which comes in handy in a variety of situations including dark garages.

The front-wheel drive Quest's increased power rating of 170 horsepower and 200 ft-lbs of torque comes from its new 3.3-liter SOHC V6, which replaces the previous 3.0-liter V6. The engine is mated to a standard 4-speed automatic transmission with overdrive fourth gear.

The Quest's class-leading handling gets even better in 1999, thanks to refinements to the independent MacPherson strut with coil springs front/rear leaf spring suspension. The rear leaf springs have been changed to a new one-piece design for reduced weight and friction.

The most noticeable improvement is felt in the area of overall ride comfort. With the refined suspension, greatly enhanced body rigidity and special attention to a reduction of noise, vibration and harshness, the new Quest is quieter, smoother and more comfortable.

"Minivans are designed as social vehicles. They occupy a special place in their owners' lives by providing a new meeting point of family exchange," said Jerry Hirshberg, president, Nissan Design International, Inc. "We've designed the new Quest to provide an enjoyable ride not only for the driver, but for all passengers."

For 1999, the new Quest will be offered in three well-equipped models, the GXE, GLE and a new, sporty SE model. The GXE provides a high level of features at a reasonable price, including many standard items that are often extra cost options on competitive vehicles.

The new Quest SE model is designed to appeal to buyers who need the versatility of a minivan, but also want sporty handling and performance.

For 1999, Quest is offered in a choice of three interior and eleven exterior colors, including several two-tone exterior combinations.

The all-American Quest, in addition to being designed by NDI, was engineered in North America through the facilities of Nissan Research and Development (NRD) in Farmington Hills, Mich., Torrance, Calif. and Phoenix, Ariz. Major body components are produced at Nissan Motor Manufacturing Corporation (NMMC) in Smyrna, Tenn., with final assembly provided by Ford Motor Company at Avon Lake, Ohio.