Ever since its market launch in 1988, the Suzuki Vitara series has earned acclaim for stylish, city oriented designs, compact, easy to manage dimensions, comfortable on-road performance, and genuine off-road capability. The series has evolved through changes in body size and powertrain. Now, more than 25 years after the original model's debut, the Vitara heritage is embodied in a fresh sport utility vehicle incarnation. The all-new Vitara has smaller dimensions to meet contemporary needs. It incorporates Suzuki's cutting-edge ALLGRIP four wheel drive system and advanced safety and connectivity equipment, it also enables owners to express themselves through various personalising options.

The new Vitara will go into production at the Magyar Suzuki plant in Hungary in early 2015, and will then make its market debut across Europe. It will later be exported around the world as Suzuki's global compact SUV.

The new Vitara inherits the styling of its series and Jimny series and brings it up to date in a brand new exterior design.

The performance benefits of ALLGRIP and a superior chassis

Large diameter wheels and the high ground clearance of an SUV yield plenty of off-road capability. In addition, an ALLGRIP system with four modes that the user can choose to suit the road surface and driving conditions assures great on and off road performance. 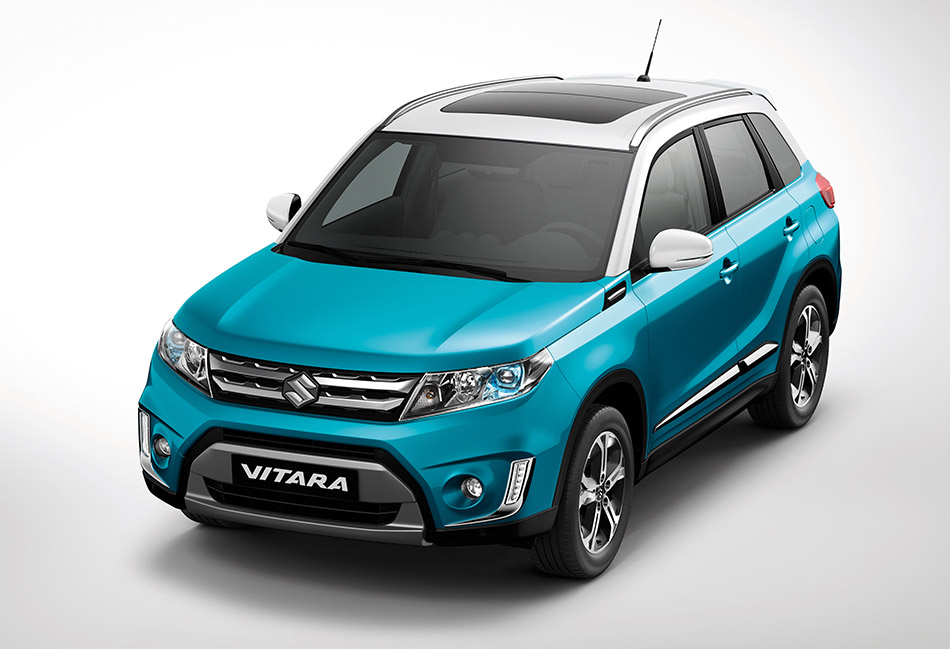 Personalisation that enables owners to express themselves

Owners can combine a range of exterior and interior items to express their individual personalities.

The new Vitara expresses Suzuki's SUV styling heritage in a strong looking design. A clamshell bonnet (a hallmark of the Vitara series) gives the front end a look of solidity, and a trapezoid motif front bumper indicates a powerful grip on the ground. Kicked-up body-side character lines and bonnet-side air outlets form motifs from the first generation Vitara. Shoulder lines running the entire length of the body contribute to a look of SUV toughness. Plus, Suzuki's pursuit of great aerodynamics is reflected in optimally designed bumper openings, in a roof line that slopes smoothly downward toward the rear, in flat underbody surfaces, and in side mirrors and front bumper edges whose shapes are based on the results of airflow analysis. LED headlamps with blue projector covers attribute to energy saving while also creating a cool impression.

A boldly shaped instrument panel garnish and a U-shape design around the shift lever communicate SUV toughness. A round clock and air outlets, which are both motifs of the Grand Vitara, give the interior a youthful, sporty look.

From the initial development stage, the model is designed with personalisation in mind. Diverse exterior colours and a range of design details enable owners to express their individual personalities. Each customer can choose from 15 body colour possibilities that include three new colours and several two tone combinations.

The new colours are as follows:

Five other items enable owners to further express themselves by personalising the new Vitara's interior and exterior details. Those items are as follows:

Further, the owner can emphasise the new Vitara's on or off-road credentials by choosing from two accessory packages:

The new Vitara is powered by the M16 1.6-litre petrol engine or the D16AA 1.6-litre diesel engine. With the petrol option, friction reductions combine with weight savings in the engine and related components to realize superior fuel economy together with high output and torque. For the diesel engine, a new EGR system and an electronically controlled VGT help to achieve powerful, torquey performance together with low emissions and superior fuel economy.

Each of the new Vitara's transmissions reflects measures to achieve excellence in terms of fuel economy, shift feel, and suppression of noise and vibration.

A six-speed automatic transmission is available for the 1.6-litre petrol engine. A wide gear ratio range permits precise control over gear ratios, so it helps to realise superior response at low vehicle speeds (for instance, when pulling away from standstill or driving slowly uphill) and enables the engine to run at low revs. An expanded lockup range promotes acceleration, fuel economy, and quietness. Plus, a manual mode enables the driver to change gear using paddles on the steering wheel. 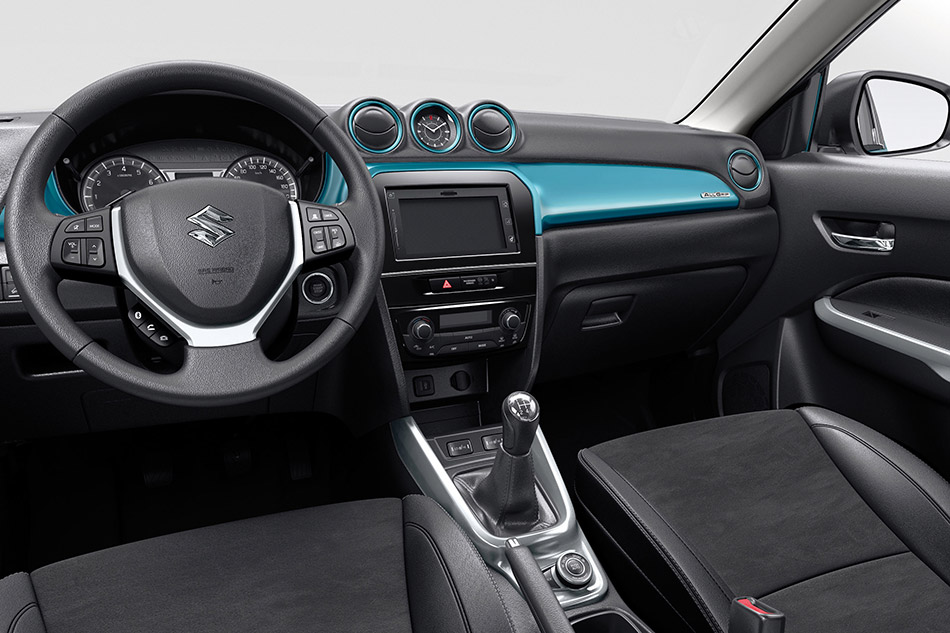 An ALLGRIP system with four driver-selectable modes that permit safe, enjoyable driving on diverse surfaces debuted in the Suzuki SX4 S-CROSS and has since earned a great reputation. This system is enhanced by the addition of a feed forward function.

The new Vitara's ALLGRIP system uses a feedback function to send more torque to the rear wheels if it detects wheelspin at the front. The new feed forward function gives the system the additional ability to predict front wheelspin risks from the road surface condition, accelerator pedal position, and steering angle and then send more torque to the rear wheels before wheelspin occurs. The system's four driver-selectable modes are as follows:

Suzuki has pursued a class leading driving experience in every model. As a result the Vitara ensures stable handling and robust drivability.

The front suspension is of MacPherson strut design. A revised shape for the lower arms, a revised layout for the suspension frame, and improved struts yield higher rigidity and accordingly better driving stability. The rear wheels have torsion beam suspension incorporating a beam design (a closed section consisting of a pipe crushed to form a "U" shape) that Suzuki first adopted in the SX4 S-Cross. The beam design yields superior rigidity and ride comfort.

The new Vitara's active safety equipment includes a Radar Brake Support (RBS) system. When driving at low speeds due to heavy traffic and such, this system detects the vehicle in front, and if it senses the possibility of a collision, it warns the driver with a buzzer sound and a notification on the multi information display.

If the probability of a collision has increased, the system activates brake assist which increases the braking force during emergency braking. If the system determines that a collision is unavoidable, it applies the brakes automatically. The system thus helps prevent collisions when the vehicle is driving at low speeds and helps reduce damage in the event of a collision.

Passive-safety equipment includes seven airbags, which protect occupants in the event of a frontal or side impact; seatbelt pre-tensioners and force limiters; and a mechanism that limits rearward movement of the brake pedal. Plus, the bonnet shape and new structures for the cowl top, wipers, and bumpers provide impact absorption to mitigate the extent of harm if the car comes into contact with a pedestrian.

The RBS system monitors the road ahead by means of milliwave radar. The radar technology enables it to work even at high speeds, in darkness, and in rain and other bad weather. The system prevents or mitigates a collision by means of three functions:

The new Vitara's ACC system combines cruise-control technology with the RBS system's milliwave radar to make driving easier and more relaxing. The system uses radar to measure the distance to the vehicle in front and automatically adjusts road speed to maintain any of three driver selected headway distances.

The luggage area has a capacity of 375 litres (VDA) with the rear seat in its upright position. The rear seat and a luggage board can be repositioned for diverse purposes.

Suzuki achieved a world first by equipping the SX4 S-Cross with a sunroof consisting of two individually sliding glass panels. Now, the new Vitara incorporates the same acclaimed feature. The sunroof extends over the front and rear seats, making the cabin more relaxing for all occupants. When the sunroof is closed, the glass panels have a combined length of 1,000mm. When the sunroof is open, the opening has a length of 560mm (one of the greatest in the class), giving occupants an invigorating open-roof experience.

The audio system has a seven inch touch panel display that enables intuitive operation and can also be used by people wearing gloves. A three dimensional navigation map makes landmarks easy to distinguish. The system also allows the customers use smartphone applications while on the move.