To most people, a typical small commercial van is little more than an empty box on wheels. But does it have to be? Why can't it be some different, something innovative and smart? Why can't a commercial van also be a mobile office? Or combine workspace and living quarters? Or, for example, a mobile lab for a marine biologist/photographer? Why not?

"A commercial vehicle has a specific job to perform, but that's no reason to design a purely rational vehicle with no warmth," said Shiro Nakamura, senior vice president and chief creative officer, Nissan Motor Co., Ltd. "In the Nissan NV200 Concept, function becomes the aesthetic. The NV200 is a highly efficient tool but one with a human touch."

Created by designers from Nissan Design Center (NDC) in Japan and Nissan Design Europe (NDE) in the United Kingdom, the NV200 is a radical, futuristic but entirely practical new concept – inspired by the needs of a marine biologist and underwater photographer. And although developed to answer one user's very specific requirements, the basic concept has serious potential for a wide range of customers and professions. 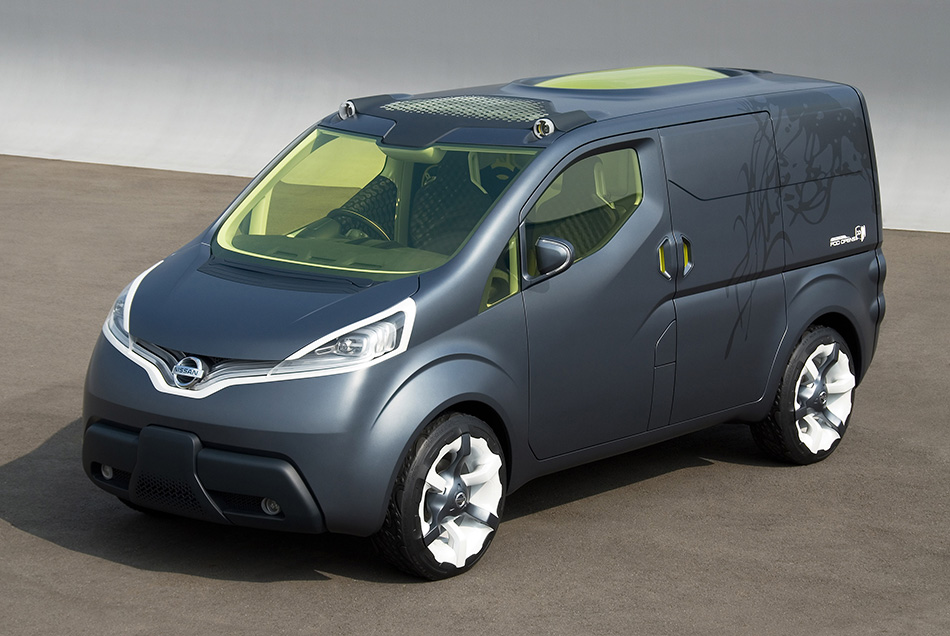 But imagine the case a marine biologist/photographer. When setting off on an expedition, he or she might take along a mountain of equipment – including underwater cameras and lights, scuba diving equipment, an underwater scooter, computer equipment for downloading digital images, mobile communication equipment to send the images to clients or research centers, clothing, food and water, and perhaps camping or overnight gear. This is typically enough equipment to fill a van, with little space left over for an on-site office. That's where innovation comes in.

At the heart of Nissan NV200 is a patented sliding cargo pod, which is divided into a number of separate areas where different pieces of diving and photographic equipment can be stored.

The pod is latched inside the shell of the load area when the van is being driven. Upon arrival at its destination, it slides out rearwards to allow easy access to the storage zones. The pod is deployed manually with the aid of hydraulic rams, and sits securely on integrated "drop-down" legs when fully extended.

As the pod is withdrawn from the van, the area left behind is transformed into a mobile office and IT dock. A computer table drops down from the side of the van to reveal two LCD screens upon which images can be edited. The front passenger seat swivels backwards on a single curved rail to face the table.

Along with housing diving gear in separate "wet" lockers, the pod holds four air tanks and there's a specially shaped area to securely hold the underwater scooter. Lockable roller blinds protect the contents, while valuable camera equipment can be accessed either from within NV200 or from outside the pod.

From the outside, NV200 is the epitome of a modern van. A cab-forward design, the wraparound grille blends into upswept lines on either side of the cabin. Dramatically rising side windows accentuate a high waistline and underline the van's practical, load carrying ability. The NV200 sits on a long 111.4-inch wheelbase and is 72.4 inches tall, providing a practical, roomy load space.

When the pod is deployed, solar panels built into its roof are directly exposed to daylight. But even when the pod is pushed back into the van, the panels line up beneath the NV200's large skylight. In this way, power can be generated in daylight hours, whether the vehicle is stationary or not.

A two-person tent – accessed from outside the NV200 – is housed at the base of the B-pillar behind the driver's door, while fillers for fuel and water are housed within the opposite B-pillar. The driver and passenger doors open conventionally, while access to the workspace is via a single sliding door on the passenger side.

Underwater and organic references can be found all over Nissan NV200. The purpose-made 20-inch alloy wheels have six "arms" that appear to grip the tires "octopus-fashion." The tread pattern on the large Goodyear tires – also specially created for NV200 – incorporates "octopus suckers" onto trainer-style soles.

Inspiration for the translucent ribs of the wraparound grille came from the layers of an onion. Liberal use of warning signs and instructions found on the exterior of the NV200 were borrowed from the practical graphics found on diving equipment. The exterior has a scratch resistant matt satin finish in a steel gray color to emphasize the "toolbox" nature of the project.

The NV200's cockpit area combines form and function. The skeletal aluminum seat frames are covered in a washable contoured material similar to the fabric used in sports shoes, with a 3D texture for extra grip.

Large open storage areas run the width of the van beneath the instrument panel and control cluster. Sensors within the storage zones detect movement and illuminate the entire area as soon as a hand or an object is placed in or near the shelves.

Above the front seats is a glass panel incorporating a wave pattern. It bathes the interior in a diffused light, while any outside movement casts shadows in the cabin that resemble life underwater. On either side of the panel are two forward-facing glazed holders into which high-powered professional underwater flashlights can be slotted. When parked, the lights provide a floodlit area ahead of NV200. 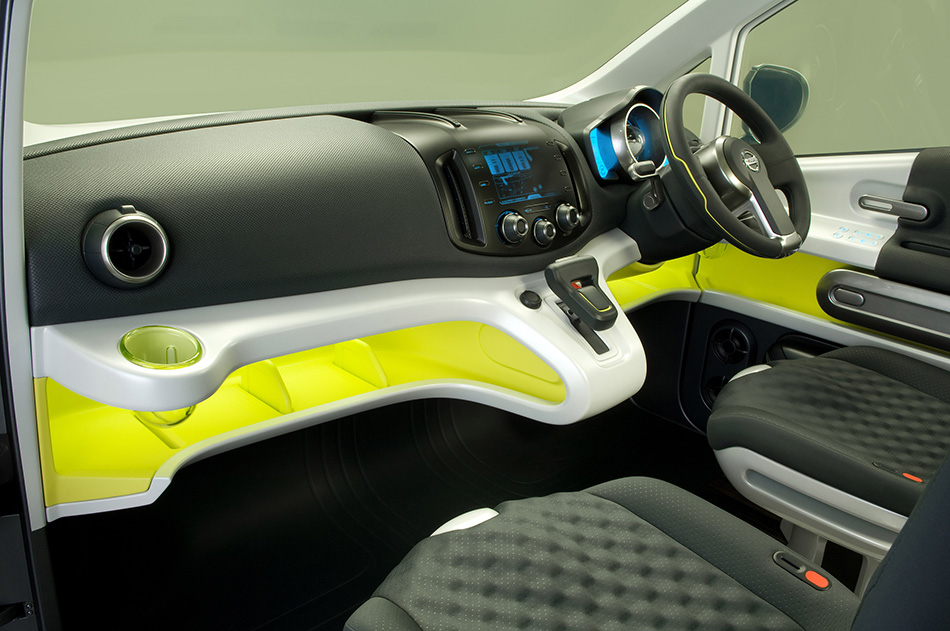 The area usually reserved for the rearview mirror holds a small color TV monitor. A rear-facing camera – a familiar Nissan feature that up until now has been used as solely a reversing aid – projects the view behind the van to the monitor at all times.

Other features include a laptop computer housed in a shockproof briefcase made from rugged ribbed plastic. When not in use, the laptop docks into a side of the van beneath the worktable. A magnetic clipboard is attached to the opposite wall of the workspace, while moveable storage boxes are mounted in all three doors.

Natural light for the work surface comes from a small side window above the bank of screens and from a large domed skylight in the roof of the van. In tropical climates, the skylight can be diffused to prevent a build up of heat within the interior.

The end of the pod facing the inside of the van forms a bulkhead behind the front seats when the pod is not deployed and incorporates a hanging space for dry clothes. It also houses a small refrigerator, drop down sink unit and first aid kit. The NV200's tanks hold enough water to supply a shower, fitted on the outside of the pod, to allow diving equipment to be washed after use.

Power for the computer, shower, refrigerator and other electrical fixtures comes from a small generator housed within the van. This, in turn, is charged by solar panels situated on the roof of the pod.

Perhaps the only area not directly influenced by the ocean is the wooden floor of NV200. This is finished in durable but entirely natural ebony, bringing an added touch of warmth to an otherwise serious working environment.

Although the NV200 has been designed to suit the specific needs of one profession, the principle behind the concept has wide ranging potential. The design team also identified mobile libraries, Farmers' Market vendors, florists and even field ambulances among other possible applications of the pod concept.

The NV200 also features an environmentally friendly clean diesel engine. It is equipped with a number of safety systems based on Nissan's Safety Shield concept, including RearView Monitor and Distance Control Assist System.

"Although the Nissan NV200 might, at first glance, appear to be a flight of fancy, the more you study its potential the more you realize it is an entirely practical and feasible project," said Nakamura. "Nissan prides itself on designing its cars to fulfill the needs and requirements of its customers. For NV200, we have taken that guiding principle quite literally and created a vehicle for one specific user. But it is a totally adaptable and flexible concept that could have applications in a number of areas of the market."

The Nissan NV200 Concept originally debuted at the Tokyo Motor Show and has also been displayed at motor shows in Europe.