The Nissan FORUM, an exploratory design concept developed by Nissan Design America, Inc. (NDA), represents the next revolution in family transportation. Answering the challenge of making family passenger vehicles more appealing to both drivers and passengers, FORUM offers a wide array of innovative ideas – from its trackless sliding side doors and elimination of traditional B-pillars, to an interior featuring a multi-position swiveling 2nd row seat and next-generation entertainment and family communications technology. FORUM makes its world auto show debut at the 2008 North American International Auto Show in Detroit in January.

Two Independent Zones In One Room

As its name suggests, FORUM is conceived as a "gathering place," bringing adults and children together in two independent but linked "zones." Targeting families with older children who not only can entertain themselves but also demand to, FORUM respects the needs and desires of both grownups and kids.

In front is the parents' zone, with advanced information technology controls and seats designed to enhance driving pleasure. The rear zone is the dedicated kids' space, where they can feel comfortable and entertained. FORUM's advanced technology bridges the two zones, as desired, into one unique family "togetherness" space. 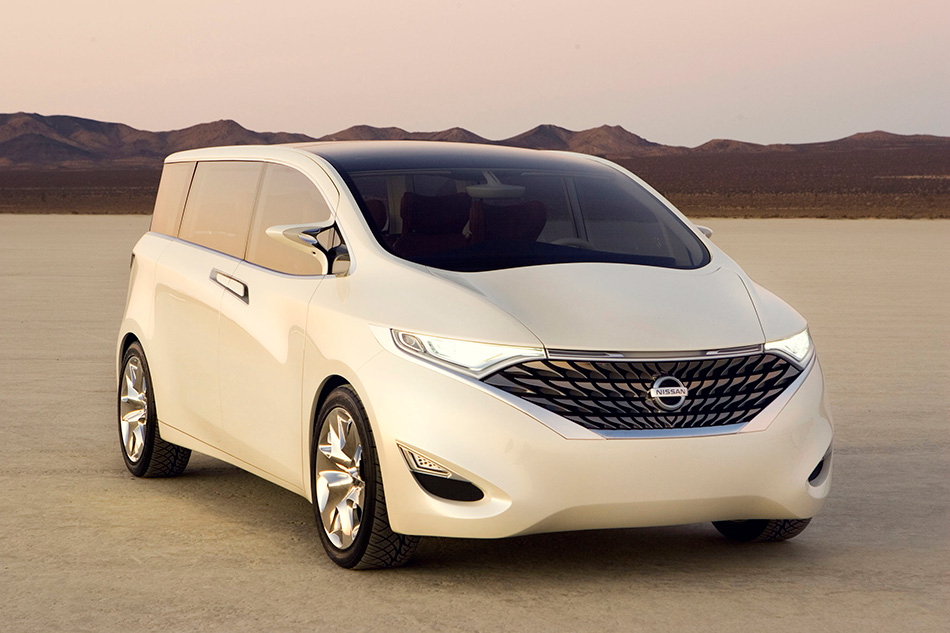 "From a conceptual standpoint, FORUM is closer to a family limousine than the minivans Gen Xers have grown up with. But unlike a real limo – or sometimes traditional minivans – the FORUM driver is just as important as the passengers," said Rachel Nguyen, director, Advanced Planning and Strategy, Nissan North America, Inc. "It offers a sophisticated space for adults and an engaging space for children – allowing both groups to enjoy themselves in their own individualistic ways while being connected in one vehicle. Like every Nissan, this dramatic FORUM Concept combines passionate driving, emotive design and an abundance of advanced, user-friendly technology."

The FORUM conceptual and design teams took care to consider the needs of both male and female drivers. "Traditional minivans are often perceived as the 'Mom's car' – but FORUM is designed to be gender neutral. The reality is that both Moms and Dads want style, performance and driving pleasure in their vehicles, whether transporting kids or not."

Research shows that the primary driver of family vehicles often changes depending on the day of the week and family schedules. During the week, FORUM's primary driver might be a mom, picking up the kids at school, dropping them off at practices or lessons – so we've incorporated advanced communications systems such as rear seat camera monitoring cameras and audio controls. "Sometimes being a mom is just about managing the chaos, but moms also deserve some personal space of their own. FORUM is designed to give moms a balance between needs and the kids'," said Nguyen.

On the weekends, a dad might become the primary driver, taking over FORUM for errands, longer trips or recreational drives – so FORUM is designed with responsive power and handling, and more aggressive, performance-car styling than traditional family vehicles. FORUM also offers the exceptional flexibility required to haul large objects and other "weekend gear."

"We also know that with traditional minivans, both moms and dads sometimes feel like they are sitting in a kids' playroom – losing their identities in the vehicle," continued Nguyen. "FORUM lets kids be kids and grown-ups be grown-ups, with the adults firmly in charge."

Ultimately, FORUM is conceived as a place to share – a destination in itself, as well as enjoyable transportation to other venues.

"There are many occasions during a week when, with a family's busy schedule, the vehicle is the only place where everyone is together – so we've incorporated features and technology to enhance this precious 'quality time,'" said Nguyen.

Pushing the Envelope of Exterior Design

Though respecting the basic layout of a "one box" design, FORUM Concept adds a higher level of dramatic styling through its wide stance, high beltline, wide-open visibility and an aggressive front end appearance.

FORUM's design innovations include wide-opening front doors and no B-pillars – creating exceptional access to the 2nd and 3rd row seats. FORUM's front doors open 90 degrees, which combined with the long sliding side doors, create wide openings for easy entry and exit of all three rows. "We were able to engineer the lack of B-pillars through use of extra thick reinforced roof and door frames – putting the material where it needs to go to help maintain structural integrity for this concept," said Bruce Campbell, vice president, Design, NDA. "Not only does this greatly enhance the ease of getting in and out of the rear seats, it allows us to utilize the 2nd row seat as a sort of 'bleacher' – adding a new dimension to watching sports, picnicking or other outdoor family activities."

Integrated into the SkyView™ moonroof panels are hidden sunshades, which allow the glass panels to be closed off during hot days. Other exterior features include LED lights front and rear, with a subtle LED light bar accenting the sweeping grille and hood design; soft-edged side outside mirrors; wide six-spoke alloy wheels and low-profile tires; a wide rear hatch; and dual exhaust outlets. 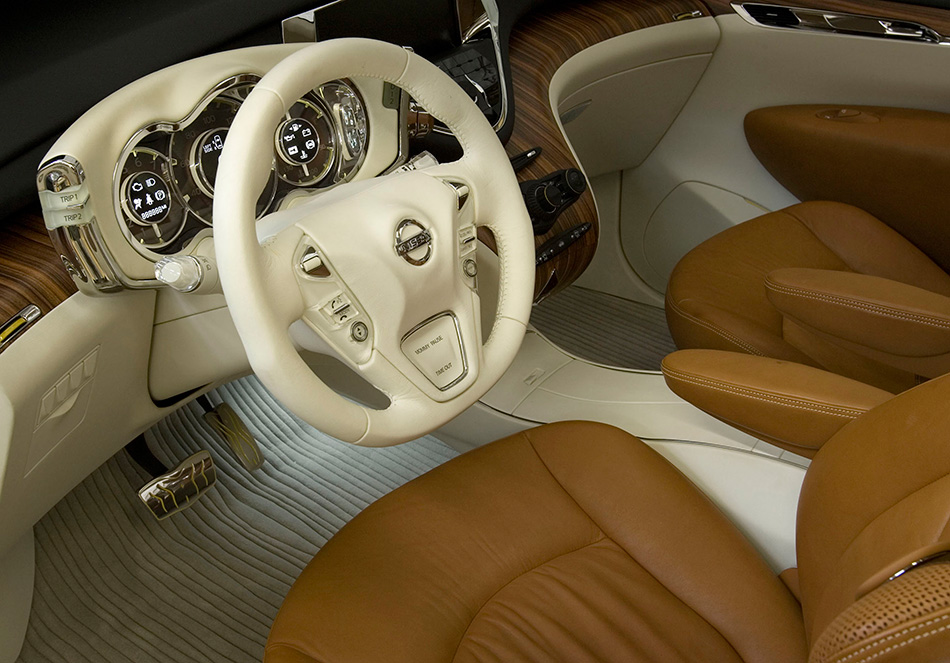 Designed in conjunction with the pillar-less side doors, Forum's revolutionary "Turntable Seating" 2nd row bucket-formed seat rotates 90 degrees to either side to create "grandstand" seating for watching sports or for picnicking and "side-gating."

The seat also rotates a full 180 degrees to face the three-passenger rear seat, creating family-style seating for up to five passengers. The 2nd row seat is operated by a small motor mounted in the vehicle floor. When it is time to rotate the seats, the center console lifts up and the two seat halves come together. At the same time, the two front seats move forward to aid in rotations clearance.

FORUM's interior is also a showcase for the latest mobile communications technology, much of it developed in conjunction with the Bose® Corporation.

"With older, more self-sufficient children, the driver's role become more of a coordinator, rather than a protector, allowing the driver to enjoy her or his own time while facilitating togetherness," said Campbell. "The idea is to enable controlled craziness in the rear zone, rather than complete chaos – which we've accomplished with a combination of communications and monitoring systems."

Close watch on rear cabin occupants is provided by a "Kids Cam" monitoring system, which utilizes 2nd and 3rd row cameras mounted in the headliner and connected to the main instrument panel LCD display monitor. Selectable camera control switches are mounted above the rearview mirror.

A one-button audio muting "Time Out" system, with the controller located in the lower center portion of the steering wheel, allows the driver to simultaneously mute all audio playing in the FORUM and broadcast the driver's voice over all interior speakers – enabling quick and easy communication to both rows of rear seats.

"The 'Time Out' system gives the driver and passengers a sometimes much-needed time out, while the rear zone cameras enable observation – and interaction – when needed, while helping drivers keep their primary attention on the road," explained Campbell.

FORUM also offers an advanced Bose® Media System, which combines infotainment features and intelligent design, with single knob proximity sensor-based controller helping the driver, again, keep their focus where it should be – on the road. Waving a hand near the controller triggers infrared sensors to bring up the initial system interface.

FORUM also employs Nissan's advanced Around View Monitor (AVM) system, found in the new 2008 Infiniti EX35. The AVM system includes front, side and rear-mounted cameras and an advanced controller that combines the images together to give the driver a unique view of all four sides of the vehicle – helping to reduce driver blind spots when parking.

State-of-the-art audio is provided by the Bose® SeatCentric™ system, which includes headrest and seatback speakers for consistent stereo image event as the seat swivels – along with independent audio programming for all three rows.
Working in conjunction with the wide opening sliding side doors is the Bose® FreeSpace® outdoor audio system, with speakers mounted on the trailing edges of the sliding doors and a wireless media player controller – providing full-range audio entertainment outside the FORUM.

Respect For The Environment

FORUM's efficient, intelligent design features also extend to the powertrain. Though as a design exploration, FORUM's emphasis is limited to form and functionality, conceptually a modern, next-generation family passenger vehicle would include a clean diesel or other environmentally sensitive powerplant.*

"Nissan has previously announced that it will be offering a clean diesel engine in the United States in the next generation Maxima, so a similar powerplant would be a definite consideration for a vehicle like FORUM," said Campbell. "Nissan is also an industry leader in CVT (Continuously Variable Transmission) technology, so you could predict smooth, responsive performance worthy of the Nissan badge."

"While some people think that family transportation vehicles are a thing of the past, Nissan's view is that vehicles just need to evolve along with changing family dynamics," concluded Nguyen. "Quality time used to be more about the quantity of time spent together with the kids. Today, it's more about dedicated moments for family fun, entertainment and communication. FORUM is a great place to gather together and rediscover each other once in a while."