The MINI Countryman has pursued its path to success both on and off-road. The first MINI with four doors, a large tailgate, five seats and optional allwheel drive now gives an additional boost to the brand's advance into the premium compact segment. Selective design modifications for the exterior and interior, optimised fuel consumption and emission figures as well as innovative equipment features contribute to the more mature charisma and increased appeal of the new MINI Countryman. This gives it a more pronounced profile as an all-round talent for versatile mobility and an active lifestyle, both in city traffic and beyond.

With striking body design accents, refined premium characteristics in the interior and enhanced agility and efficiency, the new MINI Countryman specifically emphasises all the strengths that account for its exceptional standing within the competitive field. Now an important pillar of growth for MINI with 350,000 units already sold worldwide, the compact model has everything it takes to attract new target groups to the characteristic driving fun and distinctive style of the premium British brand.

An increase in output of 5 kW to 140 kW/190 bhp in the new MINI Cooper S Countryman, improved aerodynamic properties and other optimised details in the area of MINIMALISM technology have resulted in increased figures for acceleration, elasticity and top speed in some models. 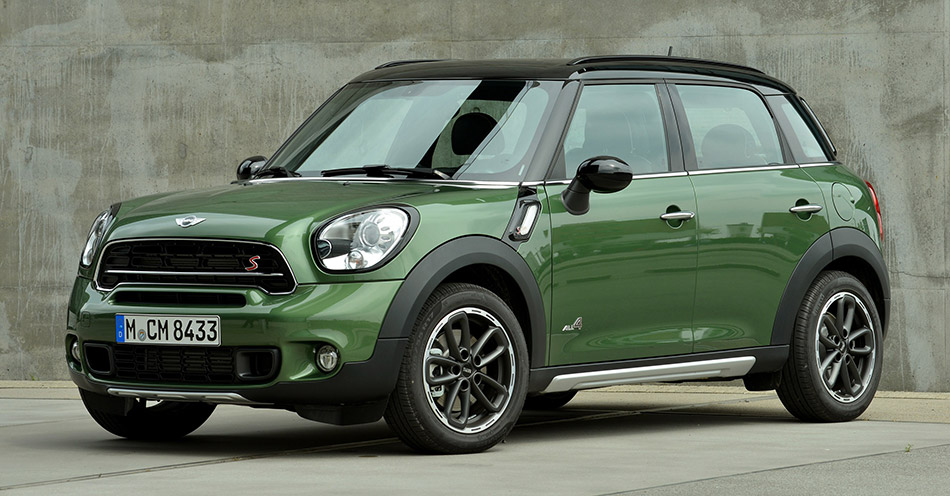 The distinctive appearance of the MINI Countryman derives from its dimensions, four doors, large tailgate and specific roof shape as well as an individual interpretation of the brand's hallmark proportions and design features.

The robust yet versatile character of the new MINI Countryman is also given intense emphasis. In conjunction with the all-wheel drive system ALL4, all visual underride guard elements for the front and rear apron as well as for the side sill area are now included as standard (exception: MINI John Cooper Works Countryman). These focus more strikingly on the ground clearance of the MINI Countryman, indicating its potential for driving fun away from paved roads. They are also optionally available for the model variants with front-wheel drive.

The range of exterior paint finishes has been expanded with the addition of Jungle Green metallic and Midnight Grey metallic, and Starlight Blue metallic paint is now available on the MINI Countryman for the first time. A contrasting paint finish for the roof and exterior mirror caps in black or white is available on request and at no extra charge for all model variants with the exception of the MINI One Countryman and the MINI One D. A contrasting paint finish in red is likewise offered free of charge exclusively for the new MINI John Cooper Works Countryman. There are also Sport Stripes and bonnet stripes in a variety of colours to choose from.

Another customisation option available for MINI for the first time is the new Piano Black Exterior. It comprises a paint finish in high-gloss black for selected surfaces, thereby providing novel emphasis not only for the car's characteristic features but also for the proportions of the MINI Countryman. In addition to the surrounds of the headlamps and rear lights finished in chrome as standard, a high-end dark shading is applied to the diagonal links between the A columns and front wheel arches, the roof rails and the cross-ribs in the radiator grille of the MINI One Countryman, MINI Cooper Countryman and MINI Cooper D Countryman.

Adaptations to the wheel rim program contribute to increased agility and efficiency in the new MINI Countryman. The MINI Cooper Countryman and MINI Cooper D Countryman now come as standard with 16-inch light alloy wheels in 5-Star Air Spoke Design, offering the advantage of reduced weight and optimised aerodynamic properties. The 17-inch light alloy wheels in the new 5-Star Triangle Spoke Design for the MINI Cooper S Countryman and MINI Cooper SD Countryman are also lighter than their predecessors. They are also optionally available in a two-colour design. Both wheel versions are also optionally available in a MINIMALISM version, including tyres with reduced rolling resistance for further reduced fuel consumption and exhaust emission figures.

Another new addition are the LED fog lights with parking and daytime driving lights in LED - available as an optional extra for the first time. They provide an intense, bright white light with a much higher level of energy efficiency than conventional headlamps. The structure of their light sources in full LED technology also helps make the front view of the new MINI Countryman striking and instantly recognisable. This light can be used to improve visibility in fog and is generated by three LED units arranged horizontally at the centre of the cluster, radiated across the entire surface of the headlamp. The daytime driving light takes the form of a luminous ring fed by 15 LED units. When the parking lights are switched on, only five LED units are active in the upper third of the ring.

In the interior of the MINI Countryman, characteristic brand design features are combined with a highly versatile interior space. The premium compact model offers five seats as standard along with the MINI Center Rail attachment system fitted between the driver and front passenger seat. The MINI Countryman offers a comfortable ride not only on rough terrain but also over longer distances. Meanwhile expansion of the luggage compartment from 350 to as much 1 170 litres provides space for luggage, bulkier sports equipment or other any other items that may be required for leisure activities. To this end the rear seats can be shifted longitudinally by up to 13 centimetres, either together or in a 40 : 60 split. It is also possible to adjust the tilt of the seats, and the rear backrests can be folded down in a 40 : 20 : 40 split.

The petrol and diesel engines available for the new MINI Countryman all meet the EU6 exhaust emissions standard without exception. The high efficiency of the modern 4-cylinder power units and the extended use of MINIMALISM technology also ensure an even more favourable balance between driving fun and fuel consumption. Detailed measures promoting efficiency include optimised air ducting in the area of the underbody, wheel bearings with a lower friction coefficient and tyres with reduced rolling resistance. This means that the figures for acceleration, elasticity and top speed are significantly improved in certain model variants.

The 4-cylinder spark ignition engine used in the MINI Cooper S Countryman with twin-scroll turbocharger, direct injection and variable valve control also sees an increase in output by 5 kW to 140 kW/190 bhp. This leads to a reduction in the figure for acceleration from zero to 100 km/h by 0.1 to 7.5 seconds, while the burst from 80 to 120 km/h in fifth gear now takes just 8.4 seconds - 0.2 seconds less than before - while top speed is increased by 3 km/h to 218 km/h. At the same time, fuel consumption in the EU test cycle in the new MINI Cooper S Countryman is reduced to 6.0 litres per 100 kilometres, while the relevant CO2 emissions drop by three per cent to 139 grams per kilometre.

The three diesel variants of the new MINI Countryman also feature an increase in both agility and economy. The new 105 kW/143 bhp MINI Cooper SD Countryman sprints in 9.2 seconds (minus 0.1 seconds) from zero to 100 km/h and in 9.7 seconds (minus 0.4 seconds) from 80 to 120 km/h. Its average fuel consumption in the EU test cycle drops to 4.5 litres per 100 kilometres (CO2 emissions: 119 g/km). The new MINI Cooper D Countryman (82 kW/112 bhp) and the new MINI One D Countryman (66 kW/90 bhp) provide more driving fun than ever with elasticity figures increased by 0.4 and 0.3 respectively. The two models see the same extended reduction in terms of fuel consumption and emission figures in the EU test cycle: 4.2 litres per 100 kilometres and 111 g/km.

The ALL4 electronic management system integrated directly in the DSC unit enables power transmission to be altered as required, responding within milliseconds.

All-wheel drive comes as standard with the MINI John Cooper Works Countryman. In this way, the supreme power of its 160 kW/218 bhp turbo engine is transferred to all four wheels so as to ensure maximum traction, ride stability and sporty flair on bends at all time. The extreme driving fun offered by top athlete of the model program has also been further increased in intensity. The time required for the sprint from standing to 100 km/h is reduced by 0.1 seconds to 6.9 seconds, while a time of just 7.7 seconds rather than 7.9 seconds is required for accelerating from 80 to 120 km/h. The maximum speed of the new MINI John Cooper Works Countryman is increased by 3 km/h to 228 km/h. Meanwhile, the extreme athlete has also been able to improve its efficiency. Its average fuel consumption in the EU test cycle drops to 7.1 litres per 100 kilometres (CO2 emissions: 165 g/km).

All engines are combined with a 6-speed manual transmission as standard. An optional 6-gear automatic transmission is available for all model variants except for the MINI One D Countryman. Shift paddles for manual selection of drive position are another option. A Sport Button is available for all model variants of the new MINI Countryman, allowing activation of a more direct steering and accelerator response.

In conjunction with the automatic transmission, pressing the Sport Button also results in changes to the shift points. In the new MINI Cooper S Countryman this also triggers a particularly striking, sporty engine sound.

The integrated safety concept of the MINI Countryman guarantees outstanding occupant protection. Its extensive standard features in the area of active and passive safety led to a top score of 5 stars on the Euro NCAP crash test in 2010.

The standard trim of the MINI Countryman now also includes daytime driving light and tyre pressure control. Constant measurement of pressure on each individual tyre means that the driver is given an early warning of potential loss in each tyre.

Another special highlight within the segment of the new MINI Countryman is the wide range of MINI Connected functions for use in conjunction with Radio MINI Visual Boost and the MINI navigation system. It offers extensive integration of smartphones in the car, allowing the use of internet-based services in the areas of infotainment, communication and driver experience. These are provided via apps whose functional diversity is being continuously expanded. There are vehicle-related functions such as Mission Control, Dynamic Music, Driving Excitement and MINIMALISM Analyser as well as various online-based services. Current functions available include web radio, the use of social networks such as Facebook, Twitter, foursquare and Glympse, RSS news feed reception and entertainment programs such as AUPEO!, Stitcher, Deezer, Audible, Napster/Rhapsody and TuneIn. Operation is intuitive reflects hallmark MINI style by means of a joystick in the centre console and the on-board computer in the central instrument.