It looks like a sports car, handles like a sports car and performs like one too. But ESFLOW is different than every other sports car yet built: It's electric. Using technology pioneered in the award-winning Nissan LEAF, the EV concept shows that driving can still be as much fun tomorrow as it is today.

Nissan has a reputation for creating some of the most exhilarating sports cars on the market. Nissan has also developed the world's first practical Zero Emission family car, the Nissan LEAF.

Now Nissan has put that expertise together. It has captured the excitement of a sports car and the environmental benefits of an electric vehicle and blended them into one dramatic two-seater concept: ESFLOW. 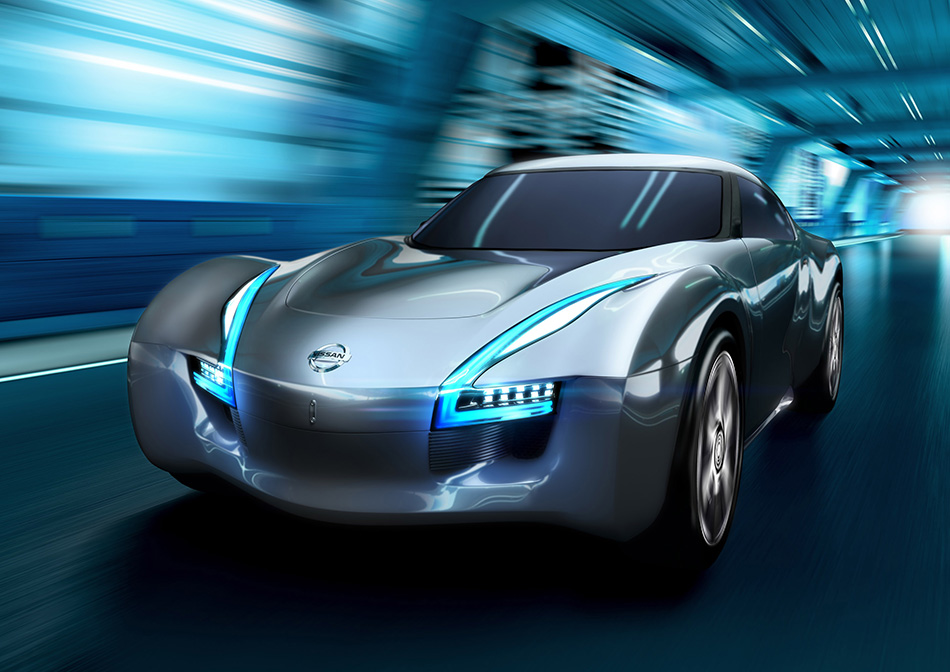 ESFLOW has been created from the ground up as a pure electric vehicle, to give an idea how a Zero Emission sports car of the future might look. Living ecologically has often been seen as an act of austerity - to save one's environmental conscience sacrifices must be made. ESFLOW is here to address that misconception.

Owning an ecologically sound car does not have to come at the expense of driving enjoyment. The briefest glance at the ESFLOW is enough to tell you what kind of car it is: a long bonnet leading into a steeply raked, wrap around windscreen, the compact cabin placing the occupants bang on the car's centre of gravity, hunched arches over ultra-low profile tyres wrapped around six spoke wheels. ESFLOW is unmistakably a sports car, and those in the know will recognize its heritage - hints of classic and contemporary Nissan sports cars abound.

Vitally, ESFLOW is not an existing ICE (internal combustion engine) powered vehicle that has been adapted to run on electricity, but a sports car that's been designed from the outset as a Zero Emission vehicle. This means that Nissan's forward thinking designers have had free rein to place the power train and batteries in the optimum positions to benefit the car's handling and performance and enhancing the thrill of driving.

The ESFLOW is based on existing technology, implemented in innovative ways. An attractive, head turning composite body covers an aluminium chassis, incorporating its own roll cage. The powertrain unit, which employs the same technologies installed in the Nissan LEAF, is tuned to offer a sporty driving experience.

ESFLOW is rear-wheel drive and it runs on two motors. The car's graceful proportions allow the twin electric motors to be placed above the axis of the rear wheels, in a mid-ship position,. These motors independently control the left and right wheels, and so the torque is optimized to ensure outstanding vehicle stability and control as well as efficient power regeneration. The motors produce enough torque in an instant for it to reach a 100kph in under 5 seconds.

Power for the motors comes from the same laminated lithium-ion battery packs used in the Nissan LEAF, but in ESFLOW the packs are located along the axis of the front and rear wheels. This centralizes the mass of the car, and thus its rotation point, close to the driver's hips. These cleverly positioned batteries enable the car to travel over 240km on one charge.

An aluminium chassis has been built around the drive train, taking full advantage of the opportunities that Zero Emission electric propulsion provides. Power cells are incorporated in such a way that they benefit ESFLOW's strength and poise, not detract from them. Indeed, unlike a conventional fuel tank, batteries do not get lighter as they provide energy, so the car's weight distribution remains constant throughout a drive.

The high waistline afforded by the ESFLOW's classic sports car proportions allows strong, yet unobtrusive roll bars incorporated in to the structure behind the seats to safely take the entire load of the car in the event of a roll over, negating the need for obtrusive, thick, reinforced A-pillars and the blind spots they inevitably create.

This almost unobstructed view ahead will not be unfamiliar to fighter pilots, and just as such pilots speak of "strapping their planes on to their backs", we hope ESFLOW owners will also feel the car to be an extension of their bodies, reacting to their slightest whims. The driver must be at the centre of the sports car both physically and metaphorically.

The ESFLOW is undoubtedly an attractive car. Crisp, clean lines not only convey the purity of its sporting potential, but suggest the clarity of electric power. The colour scheme chosen for the concept car is inspired by glaciers - highly reflective solidified liquid with blue tints in its shadows. Like its ZEV concept forebears and contemporary stable mate the ESFLOW's headlights and Nissan emblem are tinted cool blue. The six spoke wheels contain blue carbon inserts while the same material adorns the side sill, roof mounted lip spoiler and lower rear bumper.

Blue LEDs accentuate the futuristic lights slashed into the bodywork both front and rear. Where the Nissan LEAF's protrusive headlights are used to guide airflow around the door mirrors, this is not needed on ESFLOW as the mirrors have been replaced with minute rear view cameras at the base of its A-pillars. The ESFLOW's front lights do protect a secret of their own however: flip out charging points built in to the air ducts beneath.

Ecological minimalism need not come at the expense of luxury. The cabin of the ESFLOW is clean and open and weight saving has been a priority throughout its design, but it is still a comfortable and pleasant place to sit. By far the heaviest components in modern cars' interiors are the steel framed, thickly upholstered and increasingly motorized seats. In ESFLOW the seats are sculpted into the rear bulkhead of the car, negating the need for a heavy frame. This of course means that they are immobile, but this is of no consequence as the fly-by-wire steering and pedals adjust electrically to the best spot to suit each individual driver's size and preferred driving position.

The seats themselves are upholstered in gold leather and perforated gold suede while the doors are trimmed in dark blue leather and suede. The blue and gold motif, the colour of sparks, is continued across the dashboard, which is also adorned with silver carbon trim, and features four multifunction illuminated LCD displays. 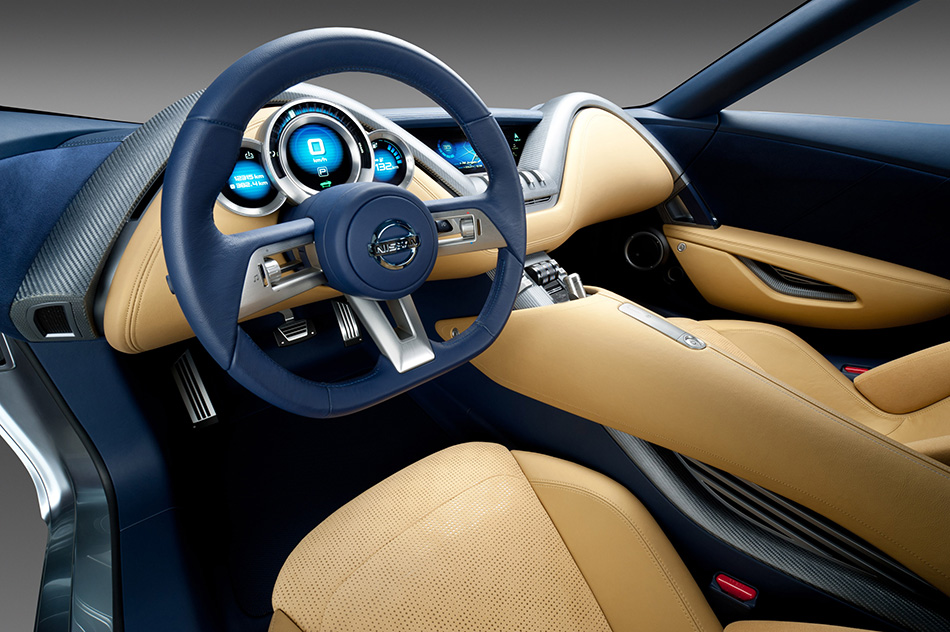 Daniel, an ESFLOW owner, works in tech, but lives for the weekend. On Friday night after work, he gets behind the wheels of his ESFLOW which instantly links with his pocket PDA and determines the fastest route to his girlfriend's home. Finding street side parking is a synch as the ESFLOW's compact dimensions allow it to slip in to the narrowest of spaces. On Saturday he drives to a popular club to exhibit his DJ skills and his friends are impressed by his cool EV sports car.

On Sunday he drives through the mountains for leisure. ESFLOW's superb weight distribution and unobstructed view ahead enables him to effortlessly nail every apex, every time. His descent from the mountains is more relaxed and he allows the ESFLOW to overrun on the long sweeping curves, turning the potential energy he and the car gained climbing up the gradients back in to electrical energy he can use once he hits the roads around Barcelona.

As his ESFLOW sips energy in its garage Daniel prepares himself for the week ahead, batteries fully recharged.

The ESFLOW concept will be unveiled at the 2011 Geneva Motor Show (3-13 March) where it will share the Nissan stand with a number of other innovative and exciting newcomers - but with one major difference: these are production ready.

Zero and low emission mobility is represented by Nissan LEAF, the 2011 European Car of The Year and the first pure electric CoTY winner, and the advanced Micra DIG-S. The latest version of Nissan's definitive city car is powered by a supercharged 1.2-litre direct injection petrol three-cylinder engine which produces just 95 g/km CO2.

Sports car excitement is reflected in the latest version of the GT-R supercar and a special version of its baby brother, the 370Z GT Edition. Underlining the breadth and depth of the Nissan range, the stand will also feature Nissan's best selling segment-busting crossovers - Juke, QASHQAI and Murano - as well as city cars Note and Pixo and the X-TRAIL, Pathfinder and Navara 4x4s.