There are myriad ways the all-new 2012 Nissan Versa Sedan breaks new ground for entry-level compact sedans. And many ways to sum them all up. But perhaps a simple statement is best: Innovation Within Reach.

"Compact cars are getting a lot of attention lately due to rising fuel costs and concerns about the environment. Yet many buyers are disappointed in what they find – vehicles rife with compromise," says Al Castignetti, vice president and general manager, Nissan Division, Nissan North America, Inc. "This new Versa Sedan, a ‘clean sheet' ground-up design, takes small cars in a new direction – proving that you don't have to sacrifice style for affordability, interior roominess for a smaller footprint, or drivability for high mpg." 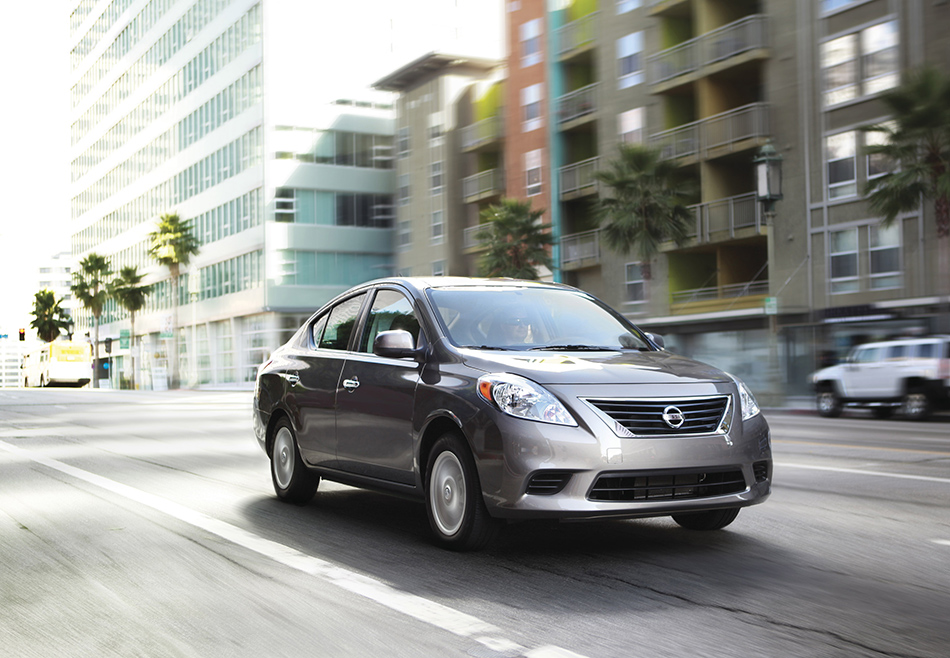 Small When You Need It, Big Where You Want It

Knowing that entry-level vehicles are used as "workhorses" – for commuting on weekdays, errand running on weekends and transporting family and friends all week long – the designers of the new Versa Sedan sought to combine five-passenger practicality with a high degree of comfort and refinement. It also offers an unexpected level of available entertainment and connectivity features, such as Bluetooth®, navigation system with 5-inch touch-screen display, Satellite Radio and an iPod®/USB interface.

"We see buyers in this segment as people who are always busy, even while relaxing," explains Castignetti. "With the amount of time they typically spend in their vehicles, we want to make sure they feel good about their purchase long after the new car smell has worn off. So we invested in areas that they see and touch most – like available Fine Vision instrumentation, quality fabrics, bright trim work and comfortable seating for front and rear seat passengers."

The new Versa Sedan's interior volume of 90.2 cubic feet and trunk volume of 14.9 cubic feet (105.1 cubic feet total) are intended to not only look great on a specifications sheet – the passenger and cargo spaces have been configured for real-world use. Versa Sedan has, for example, more rear legroom than some mid-size sedans – trumping even luxury cars such as the Lexus LS460, BMW 5-series and Mercedes-Benz E-Class. And the trunk design focuses on useable space, taking into consideration everything from the size of the hinges to the shape of the sidewalls. A 60/40-split fold-down rear seat is offered on SL models for even greater versatility.

"Since introduction of the original, Versa has been a segment leader in sales and share – something we expect to continue with this new generation design," said Castignetti. "Its look, quality feel, performance and standard equipment present an exceptionally high standard for a vehicle with a $10,990 starting M.S.R.P."

The Versa Sedan's new exterior design is also a departure from most current compact sedans, offering a refreshing design character that is both sophisticated and highly aerodynamic. The designers gave the exterior shape a strong sense of volume, with a wide shoulder width and a smooth silhouette. In front, Versa Sedan features Nissan's new signature sedan grille design and jewel-like headlights. The front end blends smoothly into the cabin, which offers flowing curves, while design elements such as the shape of the trunklid help give the new Versa Sedan excellent aerodynamics, including a low coefficient of drag of just 0.31.

In addition, to help ensure superb functionality, fresh ideas were addressed in the initial stage between the designers and the engineering team. For example, the indented line in the middle of the Versa Sedan's sweeping roofline is not just a design feature, but a functional innovation that helps reduce the amplitude of the roof panel vibrations in order to create a quieter cabin interior without the use of reinforcement devices called "mass bumpers."

"Design and engineering came together in an extraordinary collaboration to create a level of sophistication that you not only see but also feel," adds Castignetti. "It helps provide a sense of ‘modern value' that goes far beyond the mere purchase price, much like you expect from larger, more expensive sedans." 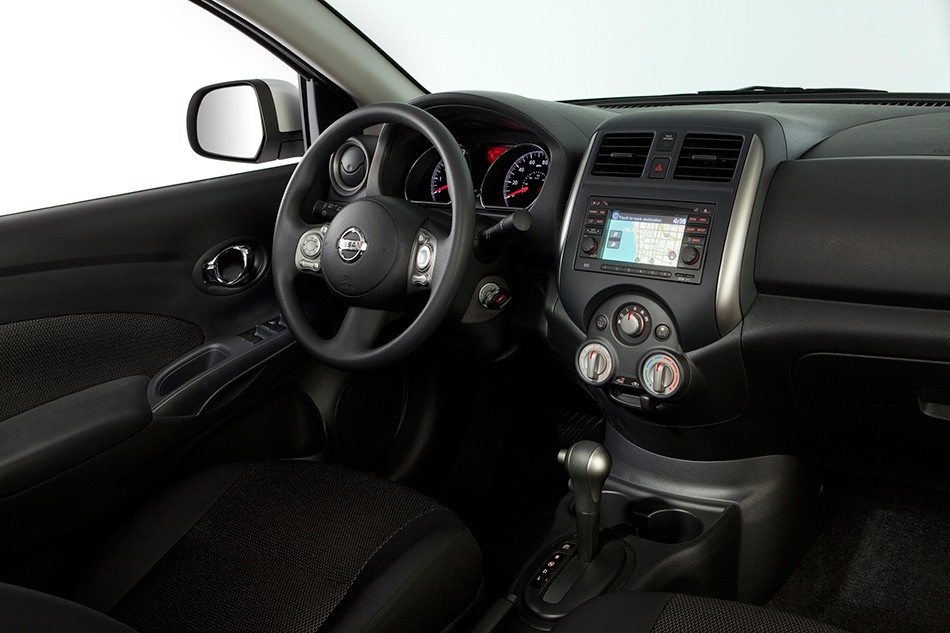 One of the biggest challenges in designing a compact sedan, of course, is where to put everything – people, cargo, engine, transmission and other mechanical components. Often the solution is to gather a fraction of an inch here, a fraction there and hope they add up to a usable benefit. For the new Versa Sedan, the approach was a little more radical – create a totally new global platform and drivetrain, reducing the size of engine and transmission, reducing the number of component parts and reducing platform weight.

"It's unusual to develop a totally new platform for a vehicle in only its second generation, yet when driven by a culture of innovation, such investments are easy to make," explains Castignetti.

The 2012 Versa Sedan's all-new front-wheel drive global "V" platform, designated "V" for Versatile, utilizes nearly 20 percent fewer platform components and weighs around 150 pounds less than the previous "B" platform. While retaining the same 102.4-inch wheelbase and 66.7-inch width as the previous generation Versa Sedan, the new model is 1.2 inches lower in height (59.6 inches) and 0.6 inches shorter in overall length (175.4 inches). The biggest dimensional gain, however, is in the visible gain in trunk length – provided by a more compact engine/transmission design that allows for a 2.7-inch increase in rear overhang (the distance from the center of the rear tire to the rear bumper).

"The new Versa Sedan proves that when it comes to packaging and aerodynamic efficiency, not all small sedans are created equal," says Castignetti. "The same can be said of the engine, which beautifully balances excellent environmental performance, responsive power and smooth, quiet operation."

The second-generation 1.6-liter HR16DE 4-cylinder engine includes a range of cutting-edge technologies, making it one of the most advanced powerplants in class. For example, while the average engine uses only one injector per cylinder to inject fuel, the new Versa Sedan engine is equipped with two streamlined injectors mounted near the inlet valve for each cylinder. This dual injector system allows a wider injection of fuel, with the smaller nozzles delivering a finer spray (approximately 57 percent finer than the previous generation single injector design's particle size) to help achieve stable combustion.

The new compact, lighter weight engine also utilizes a twin Continuously Variable Timing Control (CVTC) system mounted on both intake and exhaust ports (versus conventional CVTC systems which are mounted only on the intake port), similar to the system used on the flagship Nissan Maxima. Using a CVTC on the outlet port increases thermal efficiency, decreases inhalation resistance and offers an approximate four percent improvement in fuel efficiency. Other enhancements include the addition of a piston oiling jet, tuning of the piston top shape and expansion of the exhaust manifold diameter.

"To incorporate the new dual injector system into an entry-level vehicle is very fitting of Nissan's corporate philosophy of ‘innovation for all' – bring advanced technology to high volume segments rather than saving them only for high-end machines," says Castignetti. "The new dual injector system also uses around half the amount of rare metals in the catalyzer by reducing the amount of unburned fuel and hydrocarbon emissions."

The Versa Sedan is available with a 5-speed manual transmission (1.6 S model only) and with a next-generation Xtronic CVT™ transmission. The CVT allows continuous change of the transmission gear ratio by connecting the two pulleys with a metallic belt and changing their diameter by using hydraulic pressure. The new CVT design adds an auxiliary gearbox using planetary gearing, helping improve efficiency.

The CVT also features a transmission ratio of 7.3:1, which is broader than those of conventional CVTs and even typical 7-speed automatic transmissions. Friction is reduced by about 30 percent, weight by about 13 percent and overall size by about 10 percent versus the previous Versa Sedan CVT design.

"The result of all these enhancements and advances is that the new Versa Sedan engine burns cleaner and uses less fuel, which combined with the improved CVT performance and better aerodynamics helps improve fuel economy by about five miles per gallon versus the 2011 Versa Sedan," says Castignetti. "Better mileage means fewer stops at the pump – and more ‘room in the wallet' for other activities."

Fuel economy for the 2012 Versa Sedan is estimated at 30 mpg City, 38 mpg Highway and 33 mpg Combined with the CVT transmission (27/36/30 mpg with the 5-speed manual transmission).

In addition, the new Versa will be the first Nissan model in the United States branded with the PUREDRIVE™ designation. PUREDRIVE will be used on models utilizing Nissan's most advanced technologies to promote eco-friendly driving and lower CO2 emissions*.

The 2012 Versa Sedan will be manufactured at Nissan's Aguascalientes, Mexico assembly plant that also builds Nissan Sentra models for the United States market.