First shown at the Geneva Motor Show in March 2006, the Mazda3 MPS is the second model of the new Mazda Performance Series (MPS) after the Mazda6 MPS. It is based on the Mazda3 hatchback and is outfitted with the same 191 kW/260 PS engine as the Mazda6 MPS, which was launched in Europe at the beginning of this year. The power produced by its 2.3-litre DISI* Turbo MZR engine makes the Mazda3 MPS one of the highest performing production vehicles with front-wheel drive in the world.

Unlike the larger, all-wheel drive Mazda6 MPS, the sportiest model of the Mazda3 line up features a front-wheel drive transmission. This decision allowed for an appealing positioning of the vehicle that will give more customers the chance to enjoy Mazda's unique Zoom-Zoom driving 6 experience in the future. Market launch of the Mazda3 MPS begins in Western Europe in October. 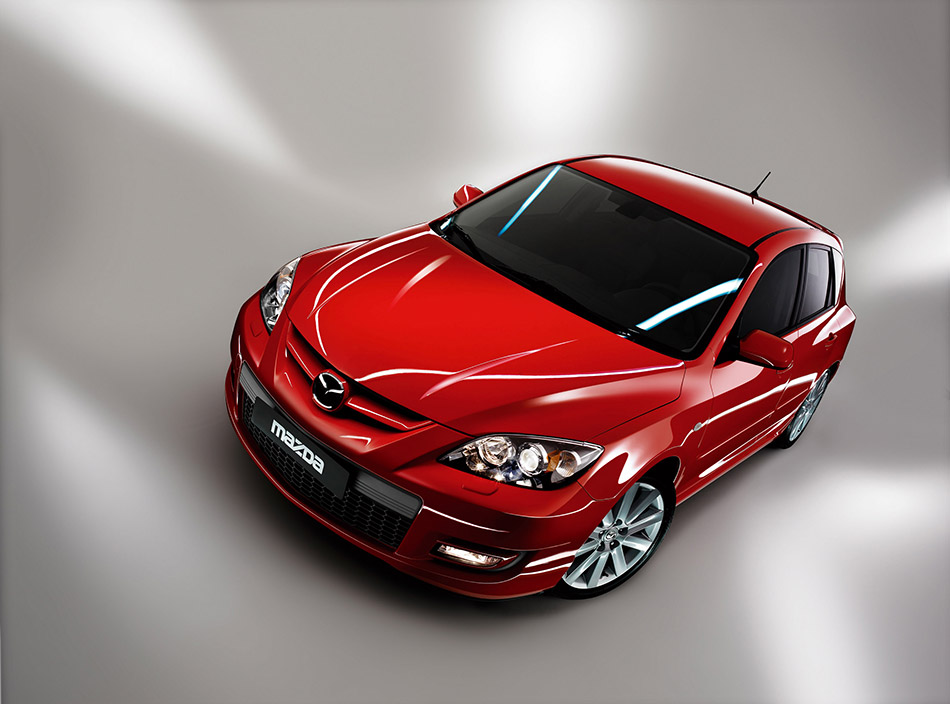 "The Mazda3 MPS represents the ultimate in driving enjoyment, in that it dramatically enhan- ces the already high potential of the ‘normal' Mazda3 with more power and a first-class chas- sis," said Tatsuo Maeda, Mazda3 Programme Manager. According to Maeda, there were three targets at the top of the developers' list: driving enjoyment, pride-of-ownership and no limits on everyday functionality. The MZR 2.3 DISI petrol with turbocharging, combined with the light- weight and compact body size, should create a very communicative and direct handling. "The design gives an immediate impression of driving fun. Added to this is an interior with a high quality feel," said Maeda. "And despite the sporty genes of the MPS, it is just as easy to use on a daily basis as every other Mazda3."

Low-key Exterior Design Hints at the Car's Power Potential
As with the Mazda6 MPS, designers of the Mazda3 MPS focus- sed on communicating the compact's high-performance character in a discreet rather than overt way. The sporty talents of the Mazda3 MPS are highlighted in the front, for instance, by fenders increased in width by 20 mm and a larger air intake. The rear end of the compact sports car, which stands on 18-inch aluminium alloys, also hints at the additio- nal power under the bonnet with a large 102 mm tailpipe.

On the inside, both comfort and functionality reign supreme. A basic black colour with contrasting red stitching, a titanium- coloured decorative hairline insert with brushed surfacing in the instrument panel, along with aluminium pedals, show a love of detailing. These details, along with the car's semi- bucket front seats, literally invite you to get in and drive.

The transverse-mounted four cylinder engine with direct- injection and turbocharging is a paragon of high-spirited performance with 115 PS per litre of power. The DISI aggregate achieves its maximum torque of 380 Nm at a particularly low engine speed of just 3,000 rpm – meaning turbo lag is something the Mazda3 MPS simply does not have. From a standing start, it reaches 100 km/h in 6.1 seconds and the car's standard six-speed manual gearbox ensures a very intensive driving experience beyond this speed as well.

Luckily the engine is frugal at the gas pump thanks to a relatively high compression ratio for a turbocharged engine of 9.5 : 1. Its high pressure, 115 bar injectors use only 9.7 litres of fuel (combined) per 100 km.

To keep this power under control without all-wheel drive, chassis engineers developed sophisticated engine torque control that, among other factors, monitors the car's gearshift and steering angle. A limited-slip differential provides optimal power distribution to the front wheels during fast cornering.

Hardly any Roll When Cornering Besides increasing body stiffness even further, engineers also meticulously fine-tuned the chassis of the Mazda3 MPS. Stiffer coil springs, thicker anti-roll bars and better perfor- ming dampers reduce roll by 60 percent. Aerodynamic tuning, especially of the underbody, lowered the car's coefficient of drag (Cd) value to 0.31, which made the top speed target of 250 km/h possible.

10 The car's braking system was upgraded to match its prodigious power output. Four large disc brakes – in the front they are ventilated with a diameter of 320 mm – decelerate the car dependably even at high speeds.