When the second-generation Nissan Versa Sedan was introduced for the 2012 model year, it redefined entry-level car value – combining a sophisticated exterior design, well-appointed interior and exceptional room for five adults – including more rear legroom than many mid-size sedans. It was a formula that has worked extremely well. Combined with the Hatchback bodystyle, Versa led the sub-compact segment in the United States with nearly a 25 percent share of sales in its first 12 months on the market.

For the 2013 model year Versa Sedan receives a number of key enhancements, led by a two mile-per-gallon increase in Highway fuel economy – to 40 mpg – for all CVT-equipped models. Helping to achieve the increase are new low-rolling resistance tires, new air intake guide, new rear spoiler and rear wheel and underbody air deflectors. The Versa lineup also expands with the addition of a new Versa Sedan 1.6 S AT model with 4-speed automatic transmission (a Versa S model with 5-speed manual transmission is also offered). "The second-generation Versa Sedan set the table for the innovative 2013 vehicles that have followed such as the all-new Nissan Altima and Nissan Pathfinder," says Al Castignetti, vice president and general manager, Nissan Division, Nissan North America, Inc. "It showed that innovation comes in vehicles of all sizes and all price categories, including entry level. Versa Sedan proves that you don't have to sacrifice style for affordability, interior roominess for a smaller footprint, or drivability for high mpg."

Small When You Need It, Big Where You Want It

Once again for 2013, Versa Sedan offers five-passenger practicality with a high degree of comfort and refinement – the perfect combination for commuting on weekdays, errand running on weekends and transporting family and friends all week long.

Versa Sedan's interior volume of 90.2 cubic feet and trunk volume of 14.9 cubic feet (105.1 cubic feet total) have been configured for real-world use. It has, for example, more rear legroom than some mid-size sedans – trumping even some luxury cars such as the Lexus LS460, BMW 5-series and Mercedes-Benz E-Class. And the trunk design focuses on useable space, taking into consideration everything from the size of the hinges to the shape of the sidewalls. A 60/40-split fold-down rear seat is standard on SL models for even greater versatility (optional on SV).

Versa Sedan's exterior design is a departure from most current compact sedans, offering a refreshing design character that is both sophisticated and highly aerodynamic. The exterior shape has a strong sense of volume, with a wide shoulder width and a smooth silhouette. In front, Versa Sedan features Nissan's signature sedan grille design and jewel-like headlights.

The front end blends smoothly into the cabin, which offers flowing curves, while design elements such as the shape of the trunklid help give Versa Sedan excellent aerodynamics, including a low coefficient of drag of just 0.28 (CVT-equipped models).

In addition, to help ensure superb functionality, fresh ideas were addressed in the initial stage between the designers and the engineering team. For example, the indented line in the middle of the Versa Sedan's sweeping roofline is not just a design feature, but a functional innovation that helps reduce the amplitude of the roof panel vibrations in order to create a quieter cabin without the use of reinforcement devices called "mass bumpers." 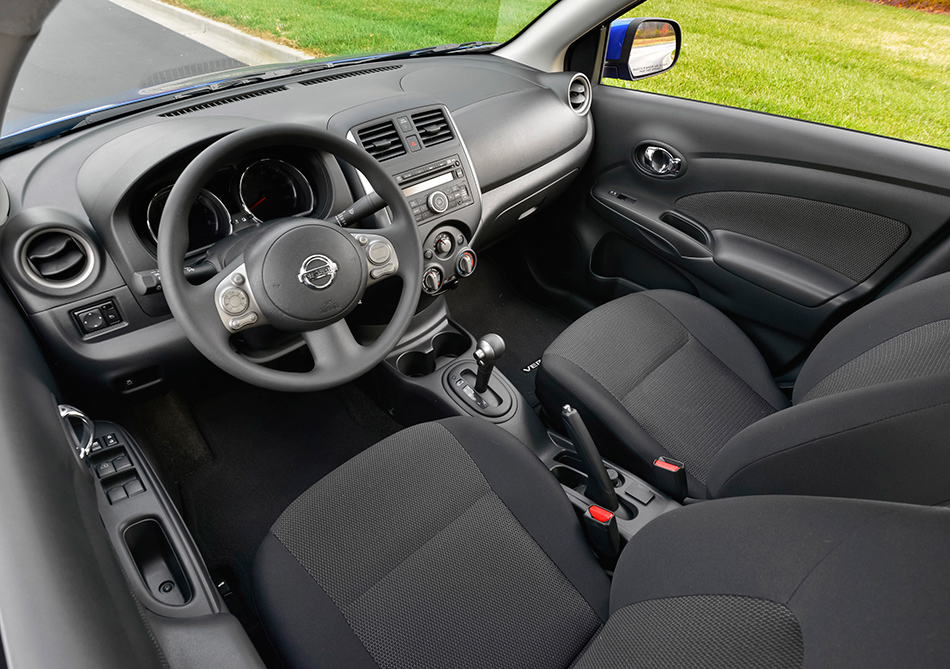 Next-Generation Technology and an Efficient V-Platform

One of the biggest challenges in designing a compact sedan, of course, is where to put everything – people, cargo, engine, transmission and other mechanical components. Often the solution is to gather a fraction of an inch here, a fraction there and hope they add up to a usable benefit. For Versa Sedan, a totally new global platform and drivetrain was utilized – reducing the size of engine and transmission, reducing the number of component parts and reducing platform weight. The front-wheel drive global "V" platform utilizes nearly 20 percent fewer platform components and weighs around 150 pounds less than the previous "B" platform, while retaining the same 102.4-inch wheelbase and 66.7-inch width as the previous generation Versa Sedan.

The biggest dimensional gain, however, was in the visible gain in trunk length – provided by a more compact engine/transmission design that allows for a 2.7-inch increase in rear overhang (the distance from the center of the rear tire to the rear bumper).

The 2013 Versa Sedan utilizes a second-generation 1.6-liter HR16DE 4-cylinder engine rated at 109 horsepower @ 6,000 rpm and 107 lb-ft of torque @ 4,400 rpm. The engine includes a range of cutting-edge technologies, making it one of the most advanced powerplants in class. For example, while the average engine uses only one injector per cylinder to inject fuel, the Versa Sedan engine is equipped with two streamlined injectors mounted near the inlet valve for each cylinder. This dual injector system allows a wider injection of fuel, with the smaller nozzles delivering a finer spray (approximately 57 percent finer than the previous generation single injector design's particle size) to help achieve stable combustion.

The compact, lighter weight engine also utilizes a twin Continuously Variable Timing Control (CVTC) system mounted on both intake and exhaust ports (versus conventional CVTC systems, which are mounted only on the intake port), similar to the system used on the flagship Nissan Maxima. Using a CVTC on the outlet port increases thermal efficiency, decreases inhalation resistance and offers an approximate four percent improvement in fuel efficiency (over the previous engine design). Other enhancements include the addition of a piston oiling jet, tuning of the piston top shape and expansion of the exhaust manifold diameter.

"To incorporate a dual injector system into an entry-level vehicle is very fitting of Nissan's corporate philosophy of 'innovation for all' – bringing advanced technology to high volume segments rather than saving them only for high-end machines," says Castignetti. "The dual injector system also uses around half the amount of rare metals in the catalyzer by reducing the amount of unburned fuel and hydrocarbon emissions."

The 1.6-liter engine is matched with a choice of three transmissions – a 5-speed manual transmission or 4-speed automatic (1.6 S models only), or a next-generation Xtronic CVT® transmission. The CVT allows continuous change of the transmission gear ratio by connecting the two pulleys with a metallic belt and changing their diameter by using hydraulic pressure. The CVT design includes an auxiliary gearbox using planetary gearing, helping improve efficiency. The CVT also features a transmission ratio of 7.3:1, which is broader than those of conventional CVTs and even typical 7-speed automatic transmissions.

Versa carries the PUREDRIVE™ designation, which is used on models utilizing Nissan's most advanced technologies to promote eco-friendly driving and lower CO2 emissions*.

All 2013 Versa Sedans are equipped with an independent MacPherson strut front suspension and torsion beam rear suspension, with front and rear stabilizer bars. All models are equipped with 15-inch steel wheels with covers and 185/65R15 all-season tires, except the SL model that features standard 15-inch aluminum-alloy wheels.