The Opel model offensive moves to the next level with the new Opel Insignia that celebrates its world premiere at the 65th Frankfurt Motor Show (September 12 - 22, 2013). The top model shines with even more attractive interior and exterior styling, taking the award-winning design philosophy "sculptural artistry meets German precision" to the next level. New powerful and ultra-efficient direct injection engines like the two new-generation Turbo gasoline units and the 99 g Turbo diesel expand the wide portfolio. This minor emission puts the new 2.0-liter turbo diesel engine in the A+ efficiency class. Both variants (the 88 kW/120 hp and 103 kW/140 hp according to EG Nr. 715/2007) consume either as the four or five-door model with six-speed manual transmission and Start/Stop system just 3.7 liters of fuel per 100 km in the combined cycle (Sports Tourer: 3.9 l/100 km). Therefore the Opel Insignia 2.0 CDTI is the most fuel efficient diesel car in its class. 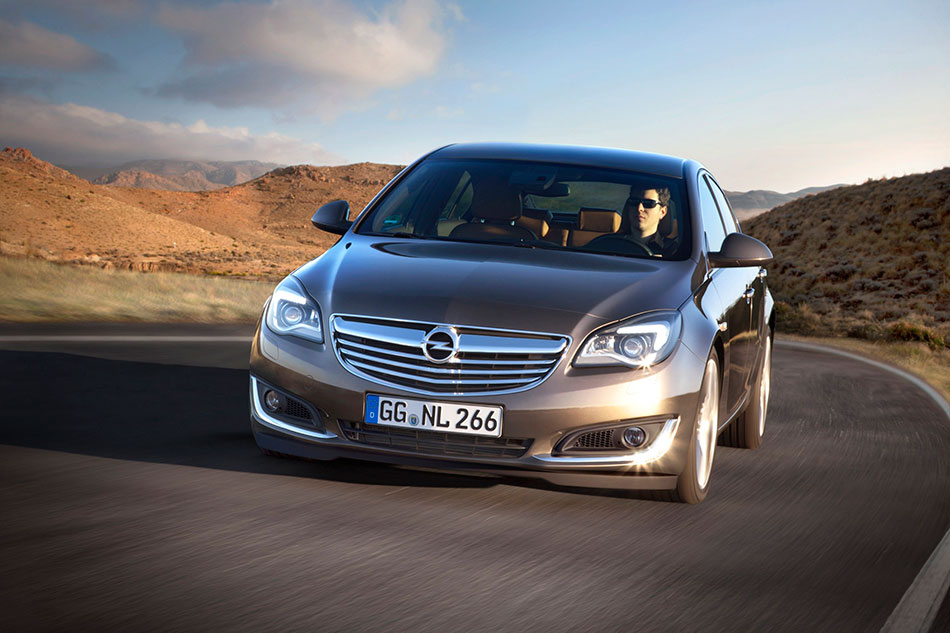 A host of chassis enhancements ensures higher agility and comfort. And a completely new infotainment system generation is now available for the Insignia. It integrates many smartphone functions into the car and can be operated intuitively and simply via a touchpad in the center console.

"The successful Insignia has already won 580,000 Opel drivers. The new Insignia will thrill even more – with a more expressive design, high-quality cockpit, intuitive operation of infotainment systems, exemplary powertrains like our trailblazing 99 gram Turbo diesel," Opel CEO Dr. Karl-Thomas Neumann describes the mid-size model's revolution. "Our flagship is now more sophisticated and eye-catching – but even in midst of all this elegance, don't forget what it's all about: to offer drivers and passengers a comfortable and safe driving experience with state-of-the-art technologies at a really attractive price."

The top model can be ordered in Germany starting the 21st of June as a four-door, five-door and Sports Tourer variant; prices begin at 24,325 euros (RRP incl. VAT in Germany.)

The spotlight was on three criteria during the enhancement of the cockpit: clear, simple and thus intuitive operation, customization of the infotainment offer, and of course comfort and safety for driver and passengers, which is increased even more thanks to lowest-possible distraction from road traffic.

The center console has a completely new feeling of subtlety and refinement, and it harbors a host of state-of-the-art technologies and functions. The black piano lacquer and chrome control panel was drastically simplified. It now has just a few buttons so that operation of the infotainment system and e.g. air conditioning is fast and intuitive.

The new infotainment generation in the Insignia can be controlled over an 8-inch color display with touch operation. From the starting screen the driver can access all function and sub-menus such as radio stations, song titles, smartphone connection or 3D navigation map via button, touchscreen, voice control or the brand new touchpad. And the infotainment system can be individualized – up to 60 personal favorites (e.g. playlists, phone contacts, navigation addresses) can be stored. 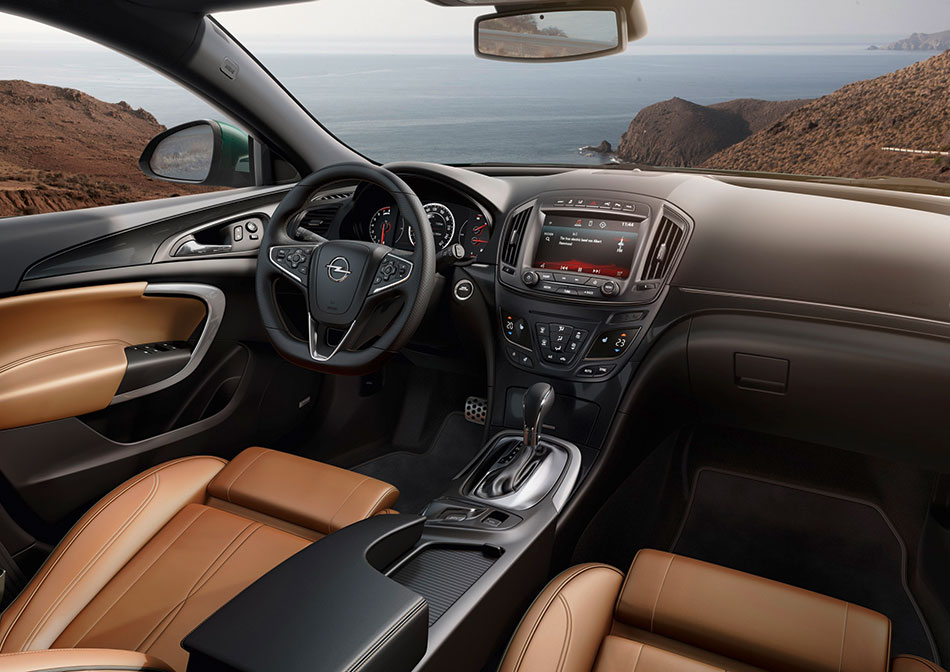 The touchpad is ergonomically integrated in the center console and offers a completely new way of quickly and intuitively accessing the infotainment system. Its illuminated, touch-sensitive surface reacts immediately to finger movements including haptic feedback and makes operation of the new infotainment generation child's play without distracting the driver from the traffic situation. Even individual letters – for instance when searching for a song title in the database or a city in the navigation system – can be entered by fingertip on the touchpad.

Additionally, the Insignia driver can control the newest generation infotainment system over newly designed, clearly laid-out steering wheel controls as well as voice commands. The advanced voice recognition function can be activated by the simple push of a button on the steering wheel controls and can also process more than one command at a time. The wide range of operating choices is the result of enhancements to the new infotainment generation.

Intensifying the man-and-machine connection is the newly designed instrument panel with an up to 8-inch high-resolution color display. In addition to the classic readouts like speed, rpm and fuel tank level, further information on navigation, smartphone use and audio options are directly in the driver's line of sight and can be adjusted.

The new Opel Insignia also makes a statement in terms of powertrain and chassis. While the mid-size model already received many accolades for driving comfort, handling and roadholding, the new edition plays in a higher league. Opel engineers made a host of improvements to the chassis including to the dampers, stabilizers and steering, resulting in decreased noise and vibrational behavior and even higher comfort.

The broad, newly expanded engine portfolio is tuned to performance and comfort without any compromises. The new Opel Insignia offers the choice between the three propulsion alternatives gasoline, diesel and LPG (Liquefied Petroleum Gas); power output ranges from 81 kW/110 hp to 239 kW/325 hp.

The top-of-the-line diesel is the 143 kW/195 hp 2.0 BiTurbo CDTI. The high-performance diesel with sequential, two stage turbo chargers reaches impressive torque of 400 Nm and is distinguished by its direct responsiveness as well as exemplary propulsion power across a broad rpm range.

The most prominent gasoline engines are the two turbo direct injection units: the 2.0 SIDI Turbo with 184 kW/250 hp and 400 Nm maximum torque as well as the 1.6 SIDI Turbo from the newest engine generation with 125 kW/170 hp and 260 Nm, and even up to 280 Nm with overboost (SIDI = Spark Ignition Direct Injection). Both boast superb power development and excellent running smoothness with high fuel economy. They can be coupled with a six-speed manual transmission and Start/Stop functionality or with a new, low-friction six-speed automatic gearbox. In addition to front-wheel-drive, the 2.0-liter SIDI Turbo is also available with all-wheel-drive.

An alternative and extremely economic powertrain option is the 103 kW/140 hp Opel Insignia 1.4 LPG with maximum torque of 200 Nm. It meets – like its petrol version - the stringent guidelines of the future Euro 6 emissions standard. With fuel consumption of 7.6 l/100 km (Sports Tourer: 7.9 l/100 km) in the MVEG combined cycle and low CO2 emissions of 124 g/km (Sports Tourer: 129 g/km CO2), the Insignia LPG model is unrivalled in efficiency class A.

A style of its own: Award-winning Opel design language with premium flair

The new Insignia evolves the multi-award-winning Opel design philosophy "sculptural artistry meets German precision" in the mid-size segment. The design theme articulates premium aspiration and dynamics with an unmistakable low-and-wide front graphic to visually pronounce its wide stance. The high-gloss chrome grille is wider and lower than before. The brand bar that cradles the Opel logo is leaner and includes winglets that link the eye to the re-designed headlamps. Depending on trim version, these come with bi-xenon lamps including the safety lighting system AFL+. All headlamps are executed in high gloss black with embedded chrome accents that enhance the technology within. The up-level headlamps include a wing signature daytime running light featuring energy-saving LEDs. The lower front fascia inserts are designed to appear slim and wide, in order to emphasize the upper grille size. Fog lamps are combined with wide black inserts and chrome accents. These grow from thin to thick as they near the wheelhouse to pronounce the width of the front design and the Opel Insignia's top-class design.

The side view of the new Insignia sedan and hatchback are clearly more differentiated than before through their unique tailgates and integrated spoiler design. The roofline of the five-door model fades out not until it reaches the spoiler trailing edge to emphasize a classic coupé silhouette. On the four-door variant, the crease line continues along the edge of the spoiler to emphasize length on the elegant sedan.

This is also echoed in the rear, where the new Insignia features a wider and lower proportioned rear end design. The high-gloss chrome brand bar has been positioned lower on the tailgate and includes the brand logo. It extends into the tail lamps to include the slim-look reverse functions. The tail / stop functions of the split 2-piece tail lamps are executed as LEDs on all levels for sedan and hatchback. Characteristic for all body versions is the light design as a sharp "wing" signature.

The new Opel Insignia also offers a host of technology, safety and comfort highlights. These include state-of-the-art radar and camera-based assistance systems ranging from adaptive cruise control to side blind zone alert, forward collision alert and premium seats with the AGR seal of approval and the keyless entry and start system "Open & Start", to name just a few.