The Opel Astra OPC EXTREME that makes its world premiere at the Geneva Motor Show in six days is a real race-bred performance car. Developed on the Nürburgring Nordschleife, the most challenging race track in the world, it is powered by a 2.0-liter turbo engine with over 300 hp and equipped with all the key high-tech components from its racing peer, the Opel Astra OPC Cup. The Astra OPC EXTREME was developed directly from the Cup version and brings pure racing technology to the road. If public reaction is as positive as expected, Opel plans a low-volume production run for the super sporty, street-legal EXTREME.

Over 300 hp will be unleashed from under the EXTREME's carbon fiber hood. Its 2.0-liter turbo gasoline engine, with direct injection and variable camshaft phasing, is quite simply the most powerful four-cylinder unit Opel has ever produced. The all-aluminum engine is mated to a slick, six-speed manual gearbox transmitting power through a limited-slip differential. This race-proven powerplant will have an easy time of it with the OPC EXTREME, because the super sporty car is 100 kilograms lighter than a conventional Astra OPC thanks to its high-quality, carbon fiber components. 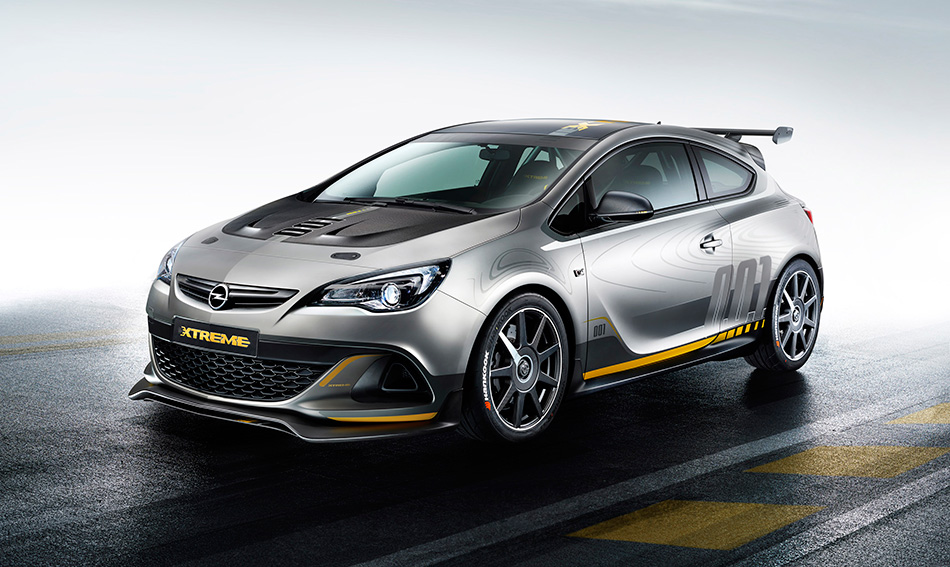 Widely used in Formula 1 racing to reduce weight, carbon composite is incorporated throughout the EXTREME. This high-strength, ultra-light material is used for the aerodynamically-optimized rear wing, the diffuser, front spoiler, hood, suspension cross-bracing, the engine cover, complete wheels, rear wheelhouse ventilation and roof. The carbon wheels are 20 kilograms lighter than their aluminum counterparts. This is weight saving in a decisive area because unsprung mass is substantially reduced – much to the joy of engineers and driving fun of drivers. The inhouse manufactured carbon fiber roof is almost as light as a feather. It weighs just 2.6 kilograms, compared to a steel roof's 9.3 kilograms, and noticeably lowers the Astra EXTREME's center of gravity. The fenders are made of aluminum and weigh only 800 grams a piece instead of 2.2 kilograms in steel.

Weight reduction in key areas greatly improves agility, overall handling and, of course, the car's power-to-weight ratio. As a result, the street-legal EXTREME sweeps through fast curves as playfully and quickly as its racing brother in the Nürburgring Endurance Championship (VLN). Opel has also given the EXTREME breathtaking stopping power to match, with a Brembo six-piston brake system including 370 mm diameter discs up front race car. Ultra high-performance, 245/35, 19-inch tires, specially developed for the EXTREME, also play a key role and give almost as much grip as those on the race car. In addition, the chassis (spring/damper) is adjustable, just like in a real touring car racer.

The pursuit of uncompromised performance continues in the design of the EXTREME'S cabin: the back seats are out and a safety roll bar is in. The driver and co-driver are perfectly positioned in specially-designed Recaro bucket seats, complete with six-point safety belts from Schroth. In the Astra OPC EXTREME, the crew doesn't just sit in the car, they are fully integrated as part of the vehicle itself. The driver also has the tactile pleasure of gripping a superb, carbon-fiber-reinforced, suede-covered steering wheel with fine yellow decorative stitching. Opel Motorsport's core color also dresses up the Astra OPC EXTREME elsewhere, for instance in the exclusively designed logo and as lacquer on the side sills and front spoiler lip.

"With the new Astra OPC EXTREME we show the pure joy of driving! This study is quite simply spectacular and driving enthusiasts will appreciate its looks, which are head-turning without grandstanding. Its interior is superb and typically Opel – exciting, precise and quality-made in Germany. The EXTREME is the new top-of-the-line model in our Astra family with all the attributes of a super sporty car," says Opel CEO Dr. Karl-Thomas Neumann.