Part of a range that has already seen the production of more than 5 million units, the 206 sedan enhances still further the acknowledged versatility of the 206, which in its different versions now represents a fully-formed daisy.

The fifth silhouette in the 206 family, the 206 sedan, is at once modern, elegant and versatile, and has been designed by the Peugeot Style Centre. It is aimed at a wide range of customers who emphasise the importance of image by choosing a car with demonstrable visual appeal, but are also demanding in terms of the considerable functional attributes offered by the 206 sedan, a vehicle with four doors and a boot. Equipped from its launch with a proven mechanical specification in terms of engines, transmissions and suspension but, adapted to the different markets in which it will be sold, this new 206 is also generous in terms of convenience and safety equipment.

Since its launch in either a 3 or 5-door hatchback, the 206 has gradually grown as a range, being enhanced by the successive appearance of the coupé cabriolet, and SW. While presenting different silhouettes, the elegance of their bodywork has always been to the fore thanks to a balanced visual aesthetic consisting of taut, sculpted lines and finely modelled curves. The style of the new four door, « booted » 206 sedan has a generous and discreet rear design and places it clearly as part of the 206 range, recognised for its feline look and « mischievous » front design.
Indeed, the roof, rear quarter panels, rear windscreen, boot and wings blend together at the front and sides of a 206 easily recognisable by its forward-positioned and inclined front windscreen. 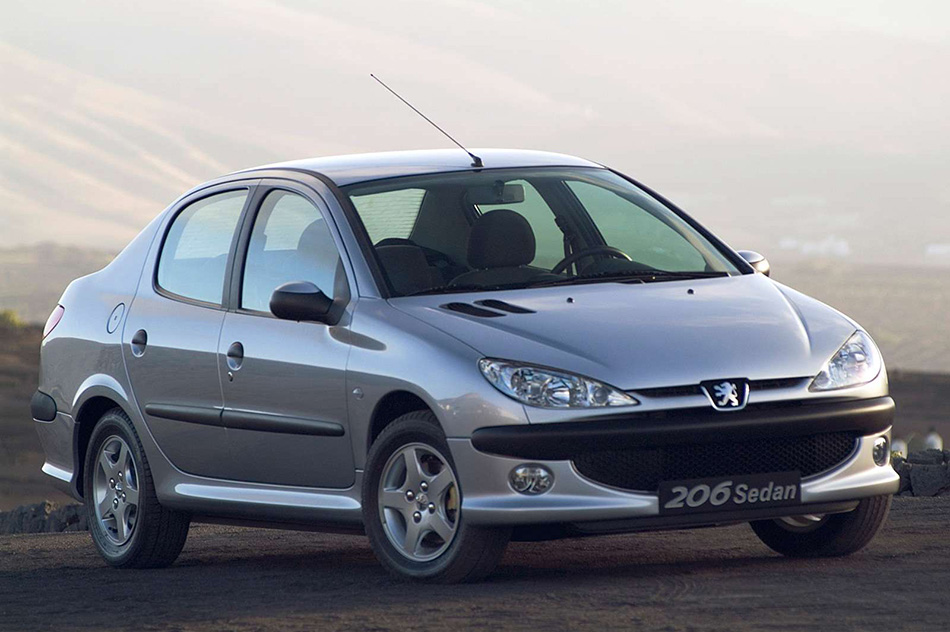 At the rear, lights identical to those of the hatchback curve around the wing to reinforce the natural elegance of this car, which also receives a boot lid with a registration plate mounted on a chrome-plated mounting panel. At once dynamic, practical and user-friendly, this latest addition to the 206 range radiates a style accentuated by the rear design inspired by that of the 607 and which blends pleasingly and gracefully with the natural characteristics of all 206 models.

In its guise as a classic, status-enhancing saloon, the latest edition of the 206 range combines a generous load volume, which is extremely practical, with a graceful overall profile thanks to the purity of the design achieved by the Peugeot Style Centre. Inside, the fluidity of form and finish common to all 206s creates a welcoming ambience both in terms of its generous interior space and the large number of storage areas. Inside, passengers perceive and enjoy a spacious car, with a vivacious atmosphere achieved through the use of quality fabrics covering numerous surfaces, and comfort thanks to the quality of the standard equipment placed at their disposal.

The architecture of the 206 sedan is similar to that of all 206s, with a transverse-mounted power train in the engine compartment and a rigid steel one-piece structure. This architecture frees up maximum space for the passenger compartment and its five occupants and contributes to their protection in the event of an impact by providing designed crumple zones.This car is available with Petrol and Diesel engines and manual and automatic gearboxes.

The interior space of the 206 sedan is the result of a design based on the requirements of the occupants and a generous load capacity that can be expanded still further thanks to the modularity of the passenger seats. With an overall length of 4.188 m and a width of 1.655 m, it has a wheelbase of 2.442 m. Compared to the 3 or 5-door hatchback versions, the increase in overall length (+ 353 mm) is due solely to the extension of the rear overhang, which is increased to 961 mm instead of 608 previously. This increase is dedicated entirely to increasing the capacity of the boot which, measuring 245 dm3 VDA on the hatchback, rises to 384 dm3 VDA on the 206 Sedan (+ 139 dm3 VDA). Similarly, the length of the boot floor with the seats not folded increases to 984 mm (+ 235 mm)

and, folded, to 1 475 mm, or a length of nearly one and a half metres. This 206 Sedan not only creates an impression of space and volume; its modern architecture gives it a truly generous load capacity which is both easy and convenient to use. Structure Without altering in any way the mechanical characteristics of the 3 or 5-door hatchback models, the structure of the 206 sedan has the same ability to protect its occupants in the event of a serious collision. For example, under its different « exterior » there is a one-piece steel structure that has a full anti-corrosion treatment. The engine compartment common to all 206s consists mainly of large chassis legs, on each of which, at the front, there are crumble zones intended to dissipate energy in the event of an impact (up to a load of 4.5 t).The presence of a short sub-frame strengthens the front assembly at the level of the bulkhead, while the almost vertical position of the power train frees up absorption space between the engine and the bulkhead, a configuration that also helps to ensure optimal protection for passengers.

On either side of the car, the one-piece body side panel is new and incorporates the rear quarter panel, the rear wing and connections with the roof, itself redesigned, as well as the boot surround and rear windscreen. In addition, a rear parcel shelf manufactured from steel plate connects the rear quarter panel pillars and supports anchorage points for the outer rear seat belts. This parcel shelf also helps to ensure excellent acoustic insulation between the passenger compartment and the boot. For the passenger compartment, the body sides are braced by numerous cross members, for example between the outer side members and the central tunnel, which is itself lined, and also on three levels in the upper part of the bulkhead and at the top of the front and rear windscreens, the rear parcel shelf, and lastly under the rear passengers on the rear suspension assembly.

The four doors have longitudinal reinforcements and padding (front doors) which, with a generously dimensioned ‘B/C' post, contributes to the excellent protection afforded to passengers. The rear floor, its length increased by 353 mm, receives a U-shaped spare wheel tray. At the rear, the entrance to the boot is reinforced by a cross member that connects the end of each side member. In terms of passive safety the design and assembly of the structure of the 206 Sedan, offers a high level of rigidity, enabling it to protect its occupants and also to exploit the full potential of its suspension. In addition, passengers are protected by two front air bags and pretensioning seat belts with force limiters. Each of the three rear passengers benefits from 3-point inertia reel seat belts.

The 206 Sedan is available with two 4-cylinder petrol injection engines - the TU3 with a capacity of 1360 cm3 and the TU5 with a capacity of 1586 cm3. These modern engines feature multi-point injection technology and have a toothed timing belt drive for the camshafts – one overhead camshaft and eight valves for the TU3A – two overhead camshafts and 16 valves for the TU5JP4. Both engines are also capable of operating on fuels with different octane ratings.

For example, the TU3A develops a maximum power of 55 kW (around 75 bhp) at 5500 rpm and a maximum torque of 120 Nm at 3400 rpm regardless of the fuel used. According to the octane rating being used, the TU5JP4 engine, adapted to various situations, develops 80 kW at 5800 rpm (around 110 bhp) while with an octane rating below RON 95 it develops 78 kW (around 105 bhp) at 5600 rpm. Torque values are respectively 147 Nm or 142 Nm at 4000 rpm. These engines with integral electronic management meet regulations in force in the different countries in which they are sold, particularly the Euro 4 standard.

Both engines are available with a MA5 manual 5-speed gearbox.With the 1.6 litre engine it is possible also to choose an automatic gearbox with electronic management and four speeds (AL4). All gearboxes are maintenance-free. The MA5 gearbox has a different set of gear ratios depending on the engine with which it is fitted and thus provides power and torque characteristics specific to each engine. Operated manually by means of a gear lever mounted on the centre console, the gearbox also has a device which prevents the driver from accidentally engaging reverse gear when changing from fifth to fourth.

With the engine running on low octane fuel, a low ratio final drive gear is fitted to facilitate moving off and acceleration. The AL4 automatic gearbox is managed electronically in conjunction with the engine. It can be used in an entirely automatic mode (gear lever positioned in D), or in « Porsche Tiptronic System » sequential mode with the lever positioned on the sequential control position (+ -).This AL4 gearbox also features two special programs, Sport and Snow, which can be activated simply by pressing a button corresponding to the required program. In Sport mode the driver can exploit the capacity of the engine to the full (more dynamic driving) while in Snow mode it is possible to move off in a controlled manner and therefore more easily under conditions of low or very low adherence.

The 206 sedan benefits from the traditional and recognised suspension know-how applied by Peugeot throughout its range. For the suspension, the specification includes at the front two McPherson type struts and lower wishbones with a linked anti-roll bar. Each front strut mounting is composed of a helical spring and a concentric damper. At the rear, two rear suspension arms, two torsion bars, and two inclined dampers and, as on the 206 SW and RC, two tie rods ensure optimum control of the rear wheel suspension geometry.