Expressing Peugeot's new alignment with sport, the 20Cup is an innovative concept, both « fun » and dynamic: suggesting an elegant synthesis between two worlds – that of the motor car by its front aspect and that of the motorcycle by its single rear wheel. This sporty, three-wheel roadster, shown in two examples, differentiated only by colour, promises real driving pleasure through the strong sensations it evokes.

Confirming its presence in high-level motor sport, Peugeot recently announced its new commitment to competition via the LMES Championship.

The 20Cup, in a more conventional form but drawing much of its inspiration from the Frankfurt concept car, will give Peugeot the basis for the development of a presence on the racing circuit.

Prefiguring the stylistic characteristics of a future model through its front aspect, the 20Cup announces a Peugeot style that is even more incisive and feline. 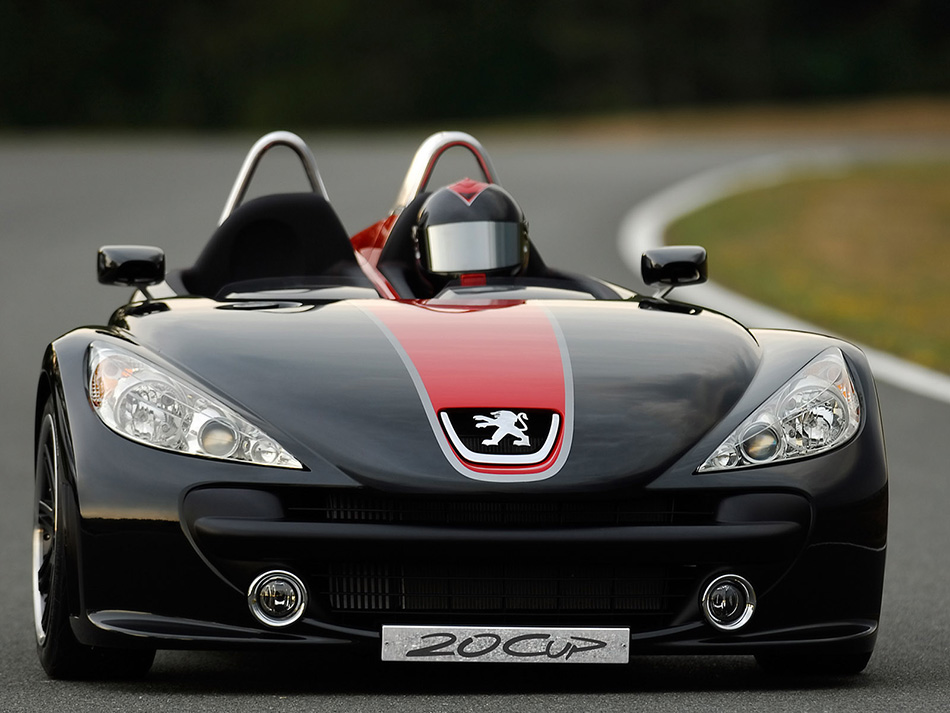 Radical by dint of its low ride height and engineering solutions taken from the world of motor sport, this concept car is built around a one-piece carbon chassis incorporating a separate two-seater cockpit located at road level.

The very low assembly and front transverse power train are designed to load the front axle and lower the centre of gravity as much as possible.

The single-arm rear axle, virtually load-free, is used only to steer this vehicle, which weighs less than 500 kg and is centred on the front axle for extremely efficient road holding.

Built aerodynamically, the 20Cup presents a generous front-mounted air intake, with air evacuated laterally ahead of the front wheels. On the lower body sides, profiles serve as an aerodynamic diffuser to promote maximum bearing on the front axle.

A new engine, the fruit of cooperation between the PSA Peugeot Citroлn and BMW Group, is introduced by Peugeot for the first time at the prototype stage on this concept car: this turbo-charged 4-cylinder petrol engine with direct injection has sixteen valves and two overhead camshafts and is packed with ultra-modern technical features. On this version it develops a maximum power of 125 kW (more than 170 bhp for less than 500 kg!) and a maximum torque of 240 Nm.

The sequential 6-speed manual gearbox has synchronizer dog teeth and is controlled by means of paddles under the steering wheel.

For this high-performance vehicle, the front suspension is the dual wishbone type, with drop links and an adjustable anti-roll bar. The rear wheel is held by a single arm with a spring/damper assembly, equipped with a rocker arm to ensure variable flexibility.

This two-seater car features rack and pinion steering and a « multifunction » steering wheel. It houses the control paddles of the piloted gearbox and, in its centre, a touch screen displaying a virtual readable image that remains horizontal regardless of the position of the steering wheel.  This screen whose image is computed according to the steering wheel angle allows the driver for example to switch on the headlamps and can provide driving assistance during sporty use by showing transverse as well as longitudinal acceleration … It also contains all of the car's operating indicators.

The metallic black or opaque white body also has direct carbon surfaces and, on each side, an "historic" lion's head that follows the curve of the front wing. A central red strip decorates the car's body lengthwise.

The main dimensions of the 20Cup are as follows:

The vehicle's kerb weight is less than 500 kg.