Athletic, powerful, elegant, the "SXC", a Concept Car from the Peugeot Style Studios of the China Tech Center in Shanghai, explores the world of an exclusive and modern Crossover. With the SXC, unveiled at the Shanghai Motor Show, Peugeot reasserts its international ambitions, refining its ability to adapt to the specific expectations of each market, while expressing in all areas its vision for the future and its skill in combining pursuit of excellence and emotion.

Concept: reinterpretation of the Crossover

In 2010, Peugeot unveiled an evolution in its stylistic codes through various concept cars: the SR1 (grand tourisme roadster), the BB1 (city car, 2.50 m long, for 4 people), the EX1 (two-seater roadster, 100% electric, which beat the homologated acceleration records in France and in China) and the HR1 (exclusive, innovative and hyper-connected city car). At the Shanghai Motor Show, the Marque's stylists express themselves in another category, which is becoming increasingly popular in the Chinese market, that of the Crossover. So, with the SXC (which stands for Shanghai Cross Concept), this theme is revisited: this concept car adopts certain characteristics from the world of the SUV (strength, high driving position, protection, etc.), without caricaturing them, inspired by the modern styles, elegant and refined, close to the upmarket world of the saloons. 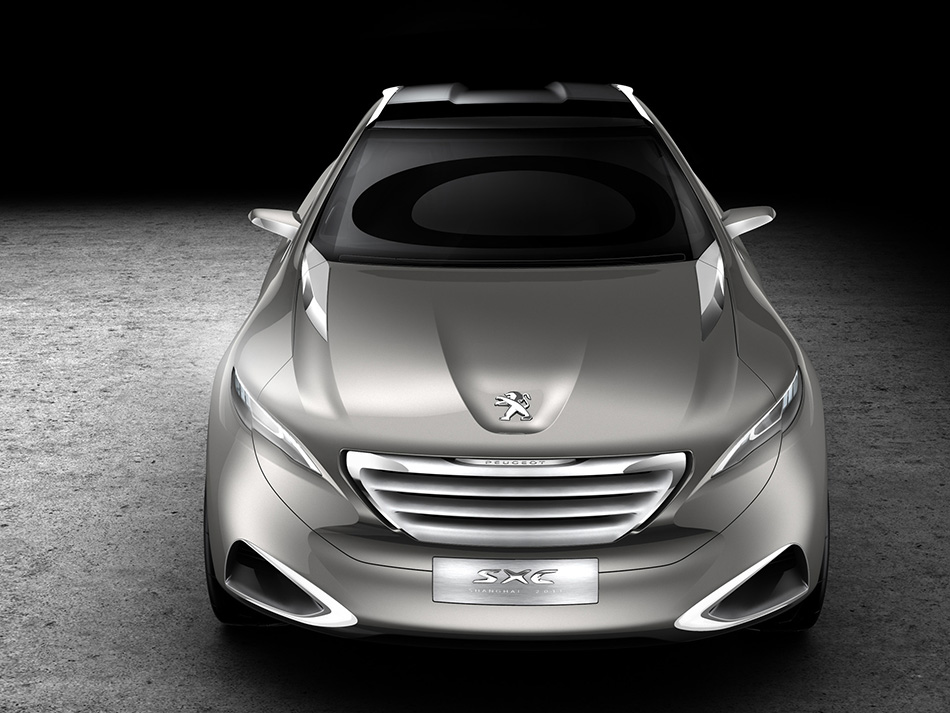 It was Peugeot's international style teams based at the China Tech Center in Shanghai who designed the vehicle. As a result, Peugeot asserts the vision of a style that is strong and recognisable, and that is able to adapt to different body types, as well as to the different expectations of the markets.

A strong Style, both statuesque and refined

The SXC is a vehicle with a strong, asserted character, its style expressing strength and power, without ostentation, through lines both simple and refined, elegant and fluid, which subtly emphasise the athletic, even muscular, character of the vehicle. Each detail is precisely sculpted on a body of impressive size (with a length of 4.870 m, a height of 1.610 m and a width of 2.035 m).

At the front, the SXC bears the ‘stylistic codes' of Peugeot. The theme of the unique "floating" grille, which appears to be independent from the bodywork, fits harmoniously with its stature. The feline headlamps, precisely chiselled, give it a piercing gaze echoing the Marque's emblem, the lion, proudly affixed on the front of the bonnet. This gaze is emphasised by a luminous LED signature, recognisable both by day and night. This visual signature returns with the rear lamps, the boomerang shape of which accompanies the movement of the rear, which has been designed with particular care.

Other "High Tech" details have been studied with great attention, in the same way as the tapered mirrors housing rear view cameras.

The roof bars, of very original design, the border of the side glazed surface,… numerous components are made of brushed aluminium, a light material, dignified and upmarket, which subtly enhances the exclusive nature of the vehicle.

Its wheel rims, of generous dimensions (22"), the design of which suggests refinement and strength, also contribute to the general balance of the vehicle.

Finally, the very protective style of the vehicle, its generous volumes, it two-part panoramic roof, its accessibility through reverse-hinged doors, … promise a particularly vast passenger compartment in which each of its 4 passengers will benefit from all the attention they desire.

One of Peugeot's priorities is to continue its environmental leadership in the years to come. This concept car incorporates the HYbrid4 technology: with an internal combustion engine at the front (which drives the front wheels) and an electric motor at the rear (driving the rear wheels), this technology permits all 4 wheels to be driving wheels when the engine and motor are operating at the same time, benefiting safety and grip in extreme conditions. It also permits driving, at low speeds, in "zero emissions" mode with the electric motor only.

Under the bonnet, the internal combustion engine is a 1.6 l THP delivering 160 kW (218 bhp): continuing its downsizing strategy, the PSA Group uses the most advanced technology to manufacture small capacity engines combining a high level of performance and environmental efficiency.

Coupled with an electric motor of 70 kW (95 bhp), the combined potential is 230 kW (313 bhp) with a combined fuel consumption of only 5.8 l/100 km and CO2 emissions of 143 g/km. The efficiency of this drive train, coupled with the acknowledged expertise of the Marque in terms of road holding, allows the SXC Concept Car to combine the emotion of real driving pleasure with the pursuit of excellence for a high level of environmental efficiency… promising its driver a unique driving experience.