Throughout its history, Peugeot has always made cars for customers who enjoy "open top driving". For example, within the legendary "20" series, the 201, 202, 203, 204 and 205 all offered a soft top version for "open top driving" enthusiasts.

The 206 CC broke new ground with regards to technology, manufacturing and cost. It created a real increase in the market for "leisure" cars, with coupé cabriolets very much to the fore - the European market for coupé cabriolets increased nine fold between the years 2000 and 2005, to around 150,000 units. Peugeot has over the years expanded its offerings in the market and now has firmly asserted itself as the leading manufacturer of coupé cabriolets, with today more than 500,000 vehicles sold world wide: - Since 2000, the 206 CC with its 2+2 architecture has led the way in the "B segment". With more than 360,000 units produced, the 206 CC is the world's best selling coupé cabriolet; 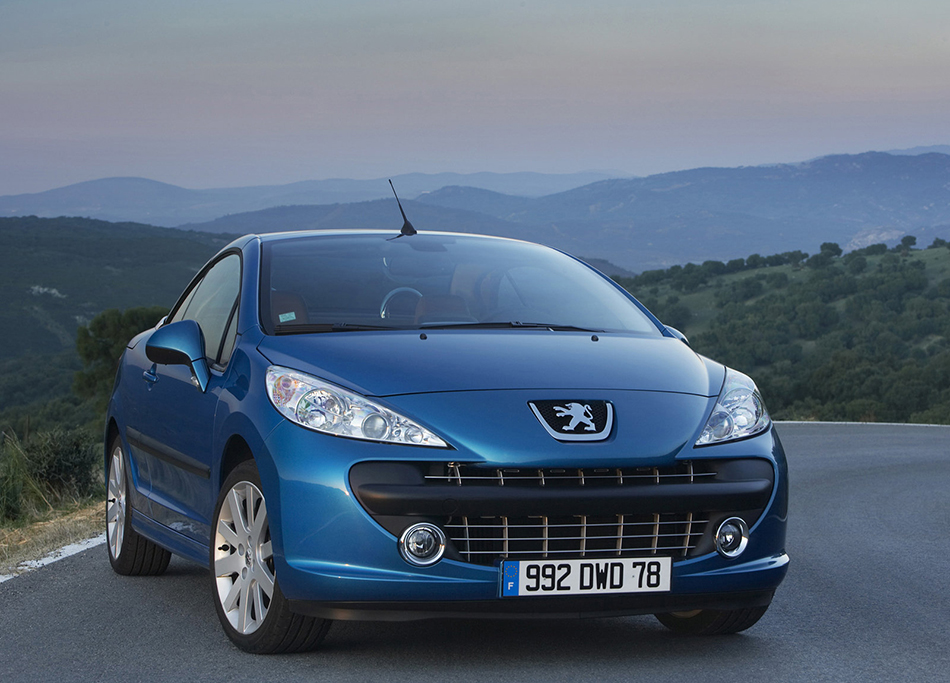 While the 207 CC perfectly encapsulates the values of Peugeot and shares basic characteristics with the 207 hatchback, it also effortlessly combines qualities rarely found on coupé-cabriolets in this market segment.

An elegant flowing shape that fires the passions …

Styled by the Peugeot style centre, the compact and purposeful body shape of the 207 CC exudes a natural dynamism, both in the coupé and cabriolet configuration.

The front of the 207 CC shares the "sports" visual look also found on the hatchback, and with the complex curve of the front windscreen it provides a very elegant look. The lower profile of the coupé exhibits very pure lines that evoke dynamism, thanks in particular to the flowing styling of the rear wings.

The design of the rear strengthens the Marque's identity and incorporates the lights and bumper from the hatchback. The design of the large rear windscreen, where it meets the boot lid, is highlighted by a brushed metal surround, which cleverly disguises the size of the rear of the car.

In the cabriolet configuration, the design of the front windscreen pillars creates a visual barrier, leaving the passenger compartment totally open to the environment. Only the head restraints and the small chrome active rear roll over bars emerge from within this space.

In both the coupé and cabriolet configuration, the large 16 ? or 17 ? alloy wheels (as standard or optional, according to version) add a dynamic finishing touch to the 207 CC.

These three 4-cylinder engines have a cylinder head with twin overhead camshafts and sixteen valves and are combined with a 5-speed manual gearbox, matched to the particular characteristics of each unit. A 4-speed automatic gearbox with a Porsche System Tiptronic sequential control is also available on the new 1.6 litre 16v 88 kW petrol engine.

The advanced technology used in this engine is a genuine first for a vehicle in the B segment. In addition to its variable timing system for the inlet and exhaust camshafts, a variable lift system on the inlet valves allows their maximum lift to be adjusted gradually according to the position of the accelerator pedal.

1.6 litre 16v THP petrol 110 kW – EP6DT Presented several weeks ago under the bonnet of the 207 hatchback, the 1.6 litre 16v THP, standing for "Turbo High Pressure", now finds an application in the 207 CC. It offers incredible engine flexibility through its maximum torque of 240 Nm available from an engine speed of only 1400 rpm and its power of 110 kW (˜ 150 bhp.) at 5800 rpm. Its innovative Twin-Scroll turbocharger and its variable valve timing system, combined with direct petrol injection ensures a remarkably efficient combination of performance and fuel consumption.

From its launch, the 207 CC will also benefit from the fitment of Peugeot's 1.6 litre 16v HDi diesel engine, which is both dynamic and economical to use. It has a maximum power of 80 kW (˜ 110 bhp.) at 4000 rpm and a maximum torque of 240 Nm from 1750 rpm, or 260 Nm with the overboost function. Combining this HDi diesel engine with a diesel particulate filter system (DPFS) and following the success of the 307 and 206 CC HDi, Peugeot again proves that a cabriolet and a diesel engine make a good partnership.

Unique features that make a difference….
A magic roof bearing the Peugeot signature …

The retractable roof is the result of Peugeot's expertise in the manufacturing of coupe-cabriolets.

It has been designed 100% in-house according to rigorous specifications in terms of quality and operating durability.

The roof is assembled on a dedicated production line at the Madrid plant, and is then sent to the 207 CC assembly line inside the same plant.
Developed from the 206 CC, the operation of the 207 CC roof differs significantly in terms of convenience thanks to its entirely automatic operation, no more manual release handles. The only manual operation consists of pressing the control button for around 25 seconds, during which time the opening or closing cycle is completed; after all four windows have been lowered automatically.

To ensure optimal sealing of the roof and assist the opening of the doors, the electric front windows are equipped with an ?automatic window drop ? system Particular attention has been paid to body rigidity … Since the overall driving pleasure of a cabriolet depends greatly on the car's rigidity, particular attention has been paid to this essential aspect of the vehicle's design.

The performance levels of the platform 1 of the PSA Peugeot Citroën group and the very rigid structure of the hatchback give the 207 CC an extremely solid structure. The structure, however, has been modified to take into account the special features of a coupé cabriolet (in particular structural reinforcements and tie-rods under the body). These modifications help to reduce vibrations, as do "stiffeners" located in the rear wings.

The 207 CC offers its occupants a level of passive safety that is as comprehensive as possible and that takes into account many different eventualities.

To limit injury as a result of a front impact, the structure of the 207 CC includes a number of reinforcements which compensate for the absence of a "roof" superstructure. These are combined with a dual front-impact absorption system which, like the hatchback, distributes impact energy between an upper structure and a lower structure. The latter also helps to protect pedestrians.

To reduce the effect of an impact, the design of the A and B posts and side members creates a reinforced solid frame combined with, doors that are extremely rigid as a result of a strengthened upper panel and a tubular reinforcement bar. The doors are also generously padded. Discreet, active safety roll over bars …

To make the very most of the cabriolet body shape, an active roll over protection system is a standard feature of the 207 CC's safety specification. This is made up of active roll-over bars and reinforcement tubes inside the windscreen pillars.

Located just behind the rear seats, the two small chrome roll over bars add to the dynamic style of the 207 CC but also serve as a discreet form of protection.

When a critical "roll over" situation is detected by the ECU, which analyses information from an angle sensor and the speed of rotation, it instructs the trigger system to release the springs that hold down the roll over bars in less than 25 ms. The roll over bars are then deployed in 175 ms to a height of 200 mm. The above is combined with reinforced A posts, strengthened by securely located internal reinforcing tubes.

Inside the car The special architecture of the 207 CC creates a passenger compartment length of 1501 mm, despite the integration of the new safety features, in particular the rollover protection system. Front passengers The 207 CC offers sport seats which allow a driving position lower than that of the hatchback, thereby meeting the expectations of coupe-cabriolet users.

The rear seats A real 2 + 2, the 207 CC offers additional features compared to a strict twoseater, which set it apart and widen its potential customer base. Controls ideally situated in the upper part of the front seat backs provide access to the rear passenger seats.

A boot …ideal for luggage

To get the very most from the "cabriolet" configuration even when parked, the boot's contents is protected by a permanent locking feature, intelligently designed to also be easy to use. This ensures the boot can only be opened with the key.

The 207 CC comes with either manual or automatic dual-zone air conditioning, allowing the front occupants to individually control their ideal temperature. The air conditioning system also has been designed to detect when the vehicle is being operated in the cabriolet configuration, so that it can adapt its operation to the chosen body configuration.

A choice of fragrances …

The 207 CC can also be equipped with a fragrance diffuser (seven fragrances are available) perfectly integrated in the fascia panel, the operation of which has been patented by Peugeot.

The 207 CC can benefit from the following range of equipment:
- an RDS RD4 CD car radio; - a colour RT3 telematic system comprising an RDS car radio, a GSM telephone and a GPS satellite navigation system with colour cartography combined with a 7" 16/9 multifunction display. This system also allows customers (depending on country) to benefit free of charge and for an unlimited period from a location-finding emergency call service; Note that this equipment is also protected electronically against the removal of CDs when the engine and the ignition are switched off … a cabriolet dictates this!