Peugeot is entering into the 4 x 4 SUV (Sport Utility Vehicle) arena with a new model that is 4.64 m long fitted with a HDi – FAP engine. Its name, 4007, is using the double zero which represents a new concept in the development of Peugeot's classic range. The 4 represents its size within the Peugeot range and the 7 specifies its generation. It is a result of the cooperation between Mitsubishi Motors Corporation and PSA Peugeot Citroën, this new 4x4 DHi – DPFS will be marketed from July 2007.

The 4007 is loyal to Peugeot's values, style value, dynamic, aesthetically pleasing and innovative. Straight from Peugeot's design centre, the racy and feline front design of the 4007, with its tapered headlights and its open front grill are the first signs that it belongs to the marque. The chrome structure that makes up this large air inlet strengthens the car's elegance and its natural air of nobility. 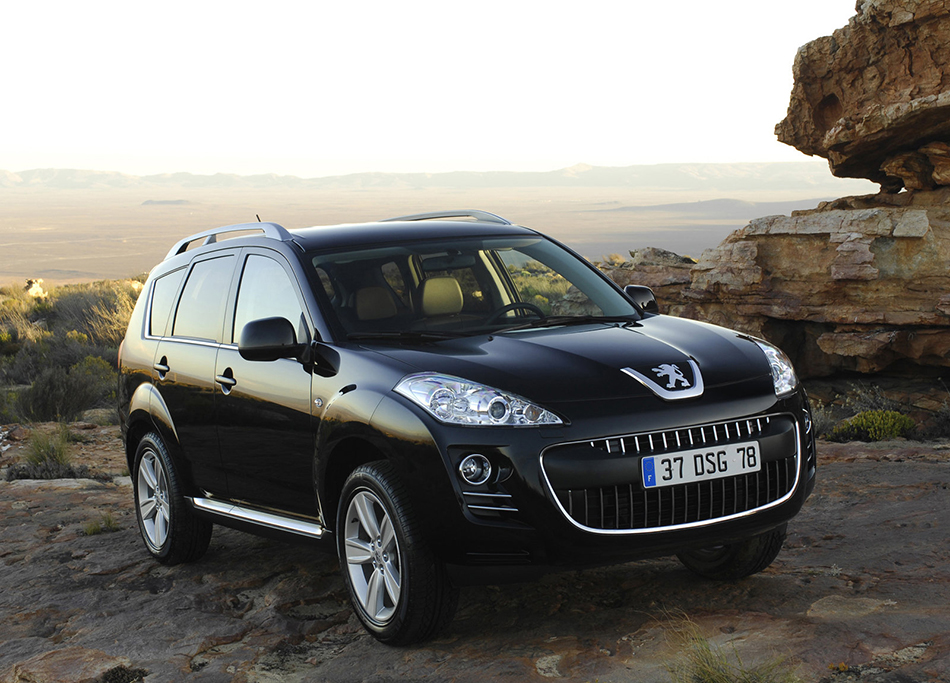 Framing the air entry at the bottom of the bumper, the fog lights in a chrome surround, give a suggestion of refinement and strength. The aerodynamic design of the roof gives an elegant profile which is complimented by a contemporary rear. This is enlightened
by a piece of brushed aluminium in the original design which emphasises the translucent jewel-like lights whilst showing off the marque's chrome emblem above the number plate.

The generous size of the wheel arches and the ground clearance contribute to give the 4007 a general impression of controlled power and the promise of a vehicle dedicated to drivers no matter what the driving conditions.

The 4007's interior has also benefited from Peugeot's specialised designers. It is dynamic and functional and offers lots of storage.
The dashboard material and design as well as the door trim have been reworked to satisfy European customers' expectations.

Peugeot has allocated the best clean diesel technology HDi – FAP to its SUV Always aware of the environment, Peugeot has fitted an advanced technology particle filter (FAP) to the 4007 series, a guage of performance durability, associated with the latest diesel engine, the 2.2 l HDi This diesel engine with direct common rail injection of 2.2 l cylinders is the result of the partnership with the Ford Group, It has an engine power of 115 kW (156 hbi in the EEC), a torque that reaches 380 Nm and is able to function on 30% biofuel. Pleasurable and agile in use, this engine boasts one of the best consumption and emission evaluations amongst the best in the category. The 6 speed manual gearbox makes best use of the characteristics of this new HDi engine.

The electronic management of the four motorised wheels is based upon specifically perfected road handling , thanks to recognised know how.

The constitutive elements such as the steering, the four wheel drive, the suspension, the brakes and the tyres have been re-evaluated and adapted in order to obtain maximum efficiency. Following the example of all Peugeots, the road handling of the 4007 is both dynamic and safe.

4007 – An Extension of the Peugeot Range

With this new offer, Peugeot is following its strategy of extending its commercial range in response to the more diversified requests of its customers. Article posted on Babez.de! The 4007 brings together strongly all the attributes of the marquee within a growing segment of the market.